ivideosongs had a great idea when they decided to enlist the aid of accomplished musicians to give their various perspectives on how to approach playing your instrument of choice. Who better to teach you than the players of the stars? Russ Kunkel and Liberty DeVitto are two of the most recorded and accomplished players in music today.

First let me say that the production of these videos is very professional and top-notch. They’re clear, the sound is very good, and the presentation in general is focused and pithy.

Russ Kunkel has long been a favorite drummer of mine. Steeped in the LA studio scene, he started back in the early 60’s with artists like Jackson Browne and James Taylor. His simple and open approach to the songs allowed the other instruments to breathe, and the lyrical content of the music to shine through. His list of clients is virtually a who’s who of pop and rock singers and songwriters. 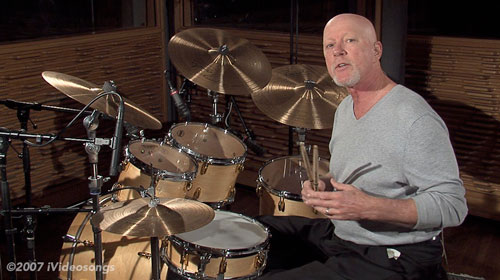 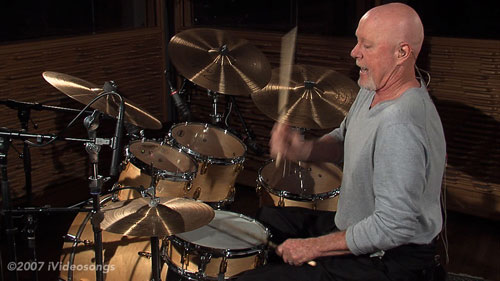 Liberty DeVitto is also an accomplished session drummer cutting his teeth on New Jersey and New York bands from the 70’s, and becoming Billy Joel’s drummer even before Joel’s ascension to stardom, playing on all his innumerable hits. His approach may be different from Kunkel’s, but respect for the song and the writer is the common thread that makes these two players tops in their class.

Kunkel’s approach to the video I watched was conversational, easy going, but almost too slow. For Doctor My Eyes, a Jackson Browne tune, he talks about building the song from the ground up starting first with Browne’s guitar, vocal, and Kunkel laying down a simple conga drum track just for feel. Then they went back in and layered the other instruments including piano, bass, drums (trap set), and more guitars. As you know, the finished product became a seminal song that, even today, remains an example of one of the best 1960’s California light rock offerings melded with folk.

I watched and listened with interest even though Kunkel’s narrative sounded a bit unemotional, almost too relaxed. But maybe that’s just him. DeVitto’s narrative was much more emotionally inclusive and ad-libbed. Part of the Kunkel video was devoted to tuning the drums. This took way too long. He tuned every drum whereas tuning one drum with clear instruction would have sufficed for most of them. Bass drums and snares are often tuned differently than tom toms so adjustments could have been made for those, but tuning each tom tom individually was, I felt, unnecessary and redundant.

Kunkel’s playing was stellar, of course. His shuffle rhythm is one of the best in the business and a lot can be learned by watching his hands, the way he hits the drum, where he hits it, and how hard.

Devito’s lesson was fun to watch because he took the instruction as more anecdotal rather than technical. His stories about how he started out with his friends, first bands, first auditions, and finally his introduction to Billy Joel were fun to hear. I know these stories mirror many young musicians’ first experiences in the business. Some of the lessons were hard-learned, successes hard-earned, and the novice player could avoid many mistakes by listening closely to what experts like DeVitto and Kunkel have to offer.

Both players talk about their philosophies and approaches to music. DeVitto’s approach tells about how he created drum parts for some of Joel’s biggest hits. He shows how he went through several variations of the part until he settled on what became the final recording.

Listening to these two guys talk about music is, well, music to my ears. They are very professional, and very accomplished. Can a rank beginner learn from these videos? Of course. Can a seasoned player get something good out of them? Sure. Can a wanna-be with little or no talent accomplish great things through these, or any videos for that matter? I suppose anything is possible but I have to doubt that. Practice can increase what little abilities you might have, but if there isn’t much there to begin with, well, it’s like beating a dead horse. No matter how hard you hit him he ain’t going nowhere.

One of the things these two players have in common is a real talent and love for what they do. Learning to play an instrument is not all cerebral schooling and practice. There is truly an intangible “feel” to music that everyone recognizes but can’t quite put their finger on. It’s the real genius behind the music. Not everyone has this feel. As a matter of fact lots of players don’t. But they keep playing anyway. Why? because they love it. It’s a “have to” kind of thing rather than a “want-to.” Will they ever be great players. Probably not. Do they care? Probably not. They’re doing something they love. Many good players have day jobs and play nights or weekends. They don’t give it up. They just keep it where it belongs.

On the other side of that philosophy is something we’ve all heard many times. “Success is 1% inspiration and 99% perspiration.” So I say to those who would use these videos as study aids—glean all you can from these tools. If you want to become fluent on your instrument practice a lot. Get a good teacher. Listen to as much music as you can. Play with as many people as you can find. Play often. And above all, have fun.

It is our view that, while very entertaining, if a student were to pick these videos as their only instruction they would have many more questions than answers. If a student wanted more detailed and constructive instruction they would have to seek it elsewhere, which is not a bad thing. I don’t believe that ivideosongs makes these videos as a complete musical education in themselves. After all, anyone who is serious about learning an art will take instruction from many sources. In their own way these ivideosongs videos would be a very important asset in the overall education of a musician-to-be.

Many thanks to ivideosongs.com for their great effort and truly professional production.