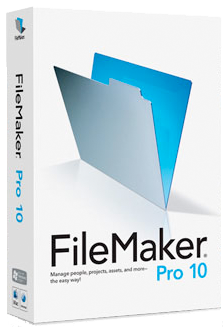 History
FileMaker Pro has long been the database of choice for users needing scalable, reliable relational performance. Slowly evolving under the wing of Claris in the pre-OS X days, FileMaker Pro has undergone many overhauls since it was first released (as long ago as 1990). Some of these have been major – that from version 6 to version 7, in particular. Others have seemed to seasoned users hardly to warrant the new release, sometimes with attendant conversion headaches and always with the financial outlay: FileMaker is not cheap

But on balance, FileMaker Pro remains without doubt the most versatile and feature-rich product of its kind for serious database users. The release of version 10 only confirms its position as market leader with many more real advantages than drawbacks. Within days (hours at times) of the announcement and release of a new version, users fill the bulletin boards and blogs with laments about what’s missing and what ‘should have been fixed’. In the end these subside: FileMaker gets the job done, and done very well indeed.

Advanced?
Power users of FileMaker will still want to go for the ‘Advanced’ version of the product: it has a script debugger, supports the creation of single-user standalone databases and has a custom function editor. In some ways this actually makes the data easier to work with. So for ‘Advanced’ read ‘Enhanced’ but without any implication that the non-‘Advanced’ FileMaker Pro 10 is in any way to be looked down upon.

This review concentrates on what’s new in FileMaker Pro 10. This means a closer look at four areas, which are by now quite familiar to FileMaker users since they have been the main areas for change and improvement in recent upgrades:

* interface: it’s much improved
* connectivity and interaction with other systems: further deepened and widened
* reporting: streamlined and made more flexible
* for developers: new functionality – scripting and functions in particular

Detractors may well say that the totality of what’s offered in FileMaker Pro 10 either constitutes nothing more than a set of minor tweaks, list all the things the software does not do, or complain that some of the changes are overdue.

Yet when you have a great product in the first place, and one which is so stable as not to need updating and patching every other week, and when you are as responsive to improvements that the actual users of FileMaker want as FileMaker Inc. is, it’s quite legitimate to version the product as the company is doing this time (and in recent releases). This is a release that existing users should certainly buy and is comprehensive enough for those users new to FileMaker not to regret an upwards or sideways move from competitor products.

Interface
The interface has been redesigned completely. That was long overdue. Previous versions looked quite outdated and crude compared with most other Apple applications. This is a vast improvement. The changes are mostly for ergonomic reasons (fewer and more memorable clicks and sequences). At first it may take a little getting used to. But it emerges quite quickly that those buttons in the new, fully customizable, Status toolbar at the top of each window (to cancel a find, to show all, for example) are the ones that are the most needed.

This horizontal Status bar has elegant, understated yet communicative icons representing much of what used to be lined up vertically on the left. Tooltips (descriptive text that appears when users move the pointer over layout objects) help until you get used to these. In the files area there is also a magnifying glass icon to indicate each field that you can use to search on. You can now also add your own tooltips in Browse or Find modes.

Very usefully, you can save your finds: often performed searches such as the number of sales made in the ‘past week’, or the percentage of users’ with last names between A and K who still owe you money after two months can be always to hand ready to re-run. A real boon!

This fresh look, which matches the way many browsers and other productivity suites look, also applies to the 30 Starter Solutions in the new FileMaker Pro 10. There are 10 new themes with pre-defined colors and fonts. Your forms can take on more of a professional look if you have neither the time nor skills to design them yourself. A new ‘Resource Center’ contains multiple well-constructed video tutorials on the new and familiar features. An ‘anomaly’ with tab-setting has also been fixed.

Scripting: the ‘Manage Scripts’ feature (formerly ‘ScriptMaker’) is now used to display a default script that can serve as a template for a script of your own; the area will also provide feedback on whether individual script steps are supported in each area of FileMaker use. There has also been a small but significant fix: the ‘Manage Scripts’ dialog box no longer opens in a maximized state when the FileMaker Pro 10 window is maximized.

In Browse mode, sorted records stay sorted such that a new added record immediately and automatically occupies its rightful place in the sort. Sub-summary reports can also now be viewed in Browse mode.

If you spend more than a few minutes a day in FileMaker, these changes – not revolutionary, but very pleasing, contemporary and plush – are bound to enhance your experience. 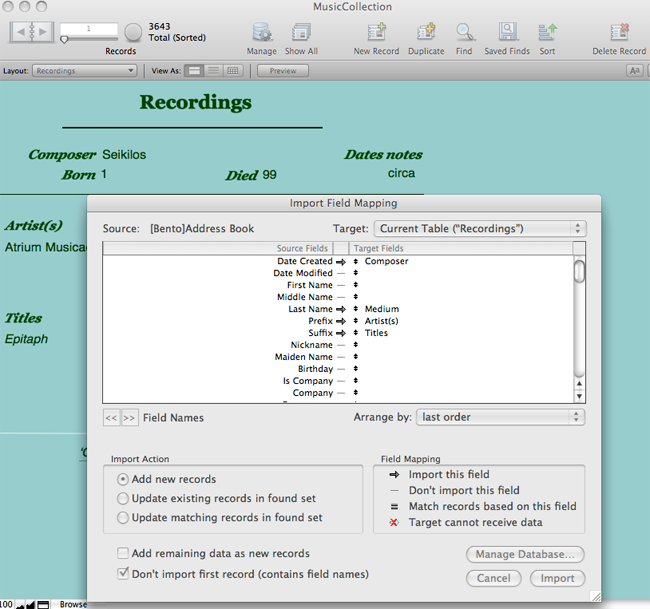 Outward-looking
With FileMaker Pro 10 you can now create databases from existing Excel or Bento 2 files. Bento is FileMaker’s ‘consumer-level’ database product more in the spirit of iWork than FileMaker Pro. Many users run either parallel databases, dual sets of data, or need to migrate between them. To have made Bento’s files available to FileMaker from within the latter is a good move that will benefit each user base. Significantly, since Bento can natively and directly read other Mac OS data sets such as that of Address Book, so now FileMaker Pro 10 has direct access to those without third party plug-ins.

Similarly those who use Excel can migrate up to FileMaker with ease. Since version 8, FileMaker has been able to export to a .xls format. Now it can convert the other way. In each case, too, the New Layout/Report assistant speeds up the relevant process.

SMTP: FileMaker Pro 10 now supports inbuilt emailing via SMTP such that you don’t have to leave it for Mail (or another dedicated email client) to send personalized mail. If FileMaker is being used as the back-end for a website, you could script an automated and customized response to incoming orders/inquiries, for example. Most FileMaker Pro 10 dialog boxes with IPv4 addresses also ask for IPv6 addresses. 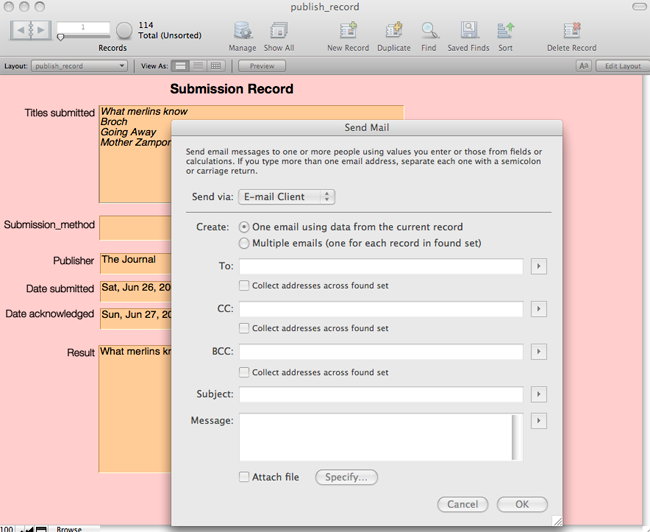 Additional External SQL Sources (ESS): support has been added for SQL tables in – among others – Microsoft SQL Server 2008, Oracle 11g, and MySQL 5.1 Community Edition. This is another trend in recent releases of FileMaker. However good the software is, it is sometimes necessary to use data from other systems. That heavyweights like the latest version of Oracle are included is all to the good.

Recovery: it’s rare that FileMaker fails. (The product performed impeccably throughout testing for this review.) But if it does, data integrity is suddenly your priority. In FileMaker Pro 10 you cannot only check possibly corrupt files for consistency, but also identify specific components for recovery. Significantly, you can also inspect files’ statuses and a detailed log both during and after the recovery process.

In a mixed environment you can now remotely deploy FileMaker Pro to multiple Windows users’ desktops rather than installing it on each user’s workstation individually.

Reporting
Dynamic: FileMaker Pro 10 has introduced a dynamic reporting capability… in List or Table View any changes that you make to your grouped data appear in real time: as if in a ‘Smart View’, any and all changes made to a record include or exclude it in or from the data set you’re viewing immediately. This is one of those changes that will quickly make you wonder how you managed without it: overdue and very welcome.

Similarly, you can modify Table View on the fly; previously you would have had to switch to Layout View. Now the Modify button (top right) shows a list of fields; deselect those you no longer need in that particular layout. FileMaker has anticipated the scope for accidental or ‘honest’ user errors: this ability to modify is absent from Form View. Again, almost essential for seamlessly presenting data.

Not of huge value but nice is the newly introduced (optional) pie-chart that indicates the proportions of found and not-found records during searching. This will be a useful ‘sanity check’, for example, when you work with a data set regularly and know its size: you can now be sure you haven’t inadvertently searched for something in a subset. 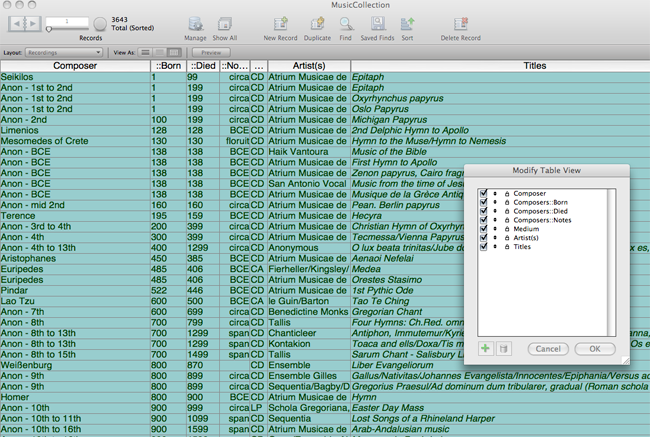 None of this is earth-shattering. But most of these changes will make use day in and out easier. Repeated tasks, checking, using FileMaker at the hub of a net with significantly extended functionality are things that users have asked for. And here they are. They’re also the kind of enhancements to workflow which are quick to assimilate, and become second nature to the regular user.

Developers
Script Triggers: rather like a spreadsheet macro, you can now specify that a FileMaker script run whenever users perform a certain action in Browse or Find Modes; these might include clicking in a field, or swapping modes, for example. There are five object-based and seven layout-based Script Triggers in this release. When planned carefully, this feature now allows developers to have (non specialist) users perform all kinds of calculations, sorts – printing even – without having to initiate them with a button. These can be timed (scheduled) too.

There are also fixes: the latest error is no longer lost in control script stepping; and new scripts and steps: to run a script at the specified interval; to open and/or edit Saved Finds; and one to let you use a calculation to dynamically specify a field name instead of having to specify each possible field name in an if-else construction; and improved script printing. 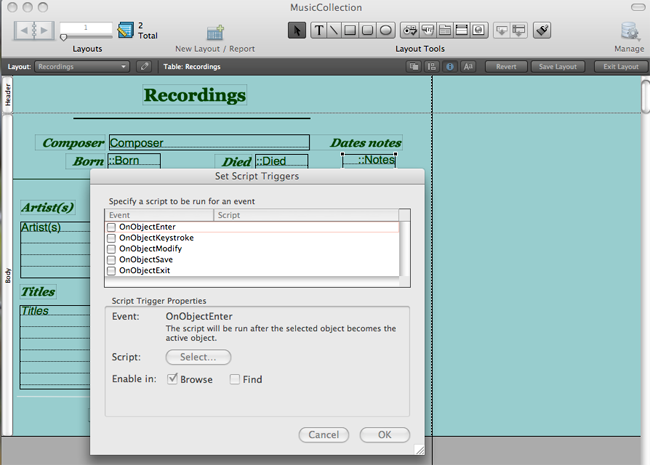 Conclusions
Watching the FileMaker Pro 10 installer run through over 10,000 files, it’s tempting to wonder just how much of a difference this upgrade – and a minimum cost of almost $200 – is going to make. On first use of the software, it is equally tempting to think, “Not much”.

But then – slowly and pleasingly – the power, sophistication and flexibility of FileMaker Pro 10 becomes both apparent and welcome. Then nigh indispensable.

The new interface; the ability to save search sets; ways in which extremely sophisticated applications can be made swiftly and reliably (scripting) and harnessed to real everyday uses (via an inbuilt SMTP client, for example); the ease with which field names can be manipulated and triggers controlled; the fact that other industry standard formats present even less of a challenge; the added comfort of enhanced (failure) diagnostics; the way updates increasingly happen on the fly; and the ways in which reports appear even more under your control.

All of these combine to make this an outwardly unspectacular update. But that’s misleading. It is a significant one that really builds on some of the advantages of Mac OS, responds to users’ wishes, makes their lives easier and – ultimately – represents a big step forward for end users. Recommended.