What! An Acer product sullying the MyMac.com site with its PC foulness? Yes, this is a review for an Acer product. When a product that works with a Mac is a great value, then we should not automatically dismiss it just because it doesn’t have an Apple logo or that its parentage is from a company that competes in many of the same markets that Apple does. It should be judged by its merits not by who makes it. 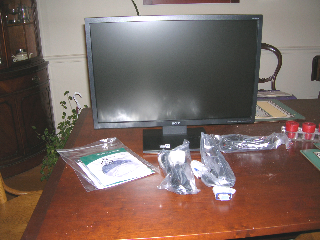 The Acer V223-WBD 22-inch LCD monitor from Acer is one tremendous value. First lets get the specifications out of the way for those who cherish such things:

Are these the kind of specifications that will make any computer user drool? Nope, and Acer doesn’t market their V-series monitors that way. The “V” stands for value and they have hit one out of the park with the v223-WBD display.

Apple sells LCD monitors and there aren’t all that many from others that are better. We shouldn’t however kid ourselves into thinking that these kinds of displays come cheap or that everyone can afford or even have a need for monitors like this or what comes at nearly the same type of price points from other manufacturers. I myself have an Intel 24-inch iMac and the display it comes with is beautiful. Not everyone with a Mac chooses such a model and of course many people with older Macs that don’t come with a display can afford the latest Apple goodness. Fortunately Apple is no longer using proprietary connectors like the old DB-15 monitor outputs that many Macs had long ago or even more recently the ADC (Apple Display Connector) that while were very convenient (only one cable for video and power) were never accepted by many outside of Apple. So they are free to choose from many different sources for a display. 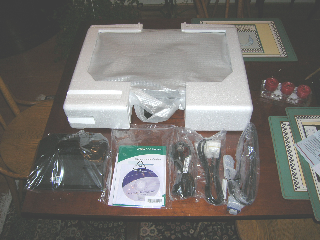 When I recently repurposed my G4 PowerMac (the same one I used to review the FastMac Processor upgrade card https://www.mymac.com/showarticle.php?id=3149) so that my son Guy would have a computer of his own to use, I needed a monitor for it. I had a Westinghouse 19-inch monitor, but frankly I was kinda sorry I had ever gotten it. The colors were washed out and uneven and it was barely useable. I wanted Guy to have at least a 20-inch monitor since I was giving my other son Peter the 17-inch iMac G5 they had been sharing. I felt bad that I was giving him the slower computer, so to make up for it I was giving him more viewable space. I started looking online for a 20 to 22 inch LCD display and the Acer model came up while searching from low to high in price. When I saw the price I was very skeptical based on previous experience with less expensive monitors and decided to do a little research to find what other people had said about this display. Almost across the board the reviews were very positive so I took a chance.

The monitor came in very minimal packaging (a plus in these environmentally-aware times). A cardboard box barely big enough to hold it and just enough Styrofoam to hold it in place. I was pleasantly surprised to find both a VGA and DVI cable inside along with (of course) the AC power cord. The monitor itself was all black with little to differentiate it in style from any other generic LCD display but who buys a monitor on what it looks like? No USB ports or much of any other added value, but I knew this going in and was not disappointed. It also comes with some Windows software that’s completely unnecessary for the Mac. 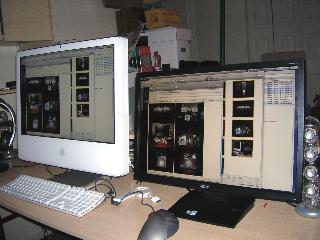 I plugged it into the G4 through its built-in VGA output and fired it up. The monitor was relatively slow in acknowledging a video signal on start-up and I found that it was much the same when waking the computer from sleep. However once it was on it just looks great. Colors were about as accurate as I have seen with any other monitor connected to this Mac (64MB graphics card) and there was no washing out or variances in color across the display. I didn’t notice any large amount of stuttering and the refresh rate, while not great in comparison to other more expensive monitors, was good enough for any game I’ve tried so far that works with this machine.

You can look around and find better, more expensive monitors. What you won’t find is a better value or more bang for your buck than this. This Acer is aces!

Lows: Slow to wake up

MyMac rating: 4 stars out of 5