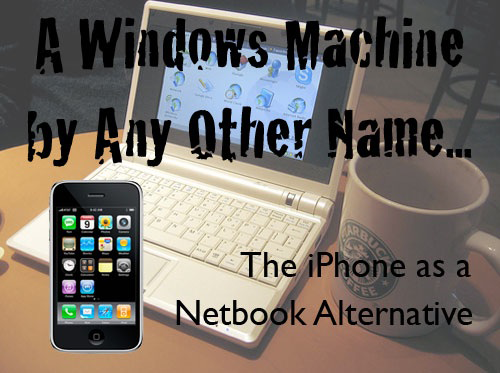 WHAT’S IT ALL ABOUT… STEVIE?
In a recent quarterlyÂ conferenceÂ call, Steve Jobs made the following comment regarding the current netbook discussion:

“We’re not tremendously worried. As we look at the netbook category, that’s a nascent category. As best as we can tell, there’s not a lot of them being sold. You know, one of our entrants into that category if you will is the iPhone, for browsing the Internet, and doing email and all the other things that a netbook lets you do. And being connected via the cellular network wherever you are, an iPhone is a pretty good solution for that, and it fits in your pocket.” (Click this link to read the original article)

At the time of this statement, it was clear that Apple felt that the iPhone was/is a great netbook type device.Â The current sales numbers for netbooks indicate that not everyone agrees with the Jobsian edict. Netbook sales haveÂ steadilyÂ increased and have surpassed iPhone sales according to the third quarter numbers for this year.

In the spirit of scientific discovery, and, more importantly, AppleÂ evangelism, we are going to examine this burning question. Our purpose is to equip the legions of Apple disciples with a definitive position regarding this hotly debated subject. Is the iPhone, as Steve has shouted from the hill tops ofÂ Cupertino, an acceptable alternative to a netbook? Can this beautiful but diminutive device win the netbook version of the all important Starbucks Visibility Battle? Or, does Apple need to forge a new weapon for its loyal subjects toÂ sheathÂ in their message bags andÂ neopreneÂ sleeves?

A WINDOWS MACHINE BY ANY OTHER NAME, IS STILL A WINDOWS MACHINE
Speaking in general terms, a netbook serves primarily as aÂ Mobile Internet Device. As such, there are some basic capabilities expected from every netbook. The first and most important capability is the ability to connect to the Internet. With a broadband (WiFi and sometimesÂ cellular) Internet connection, one can browse the web, send and receive email, and quench even the most veracious iTunes Music StoreÂ appetite.

Depending on your personalÂ preference, most netbooks ship with Linux, Windows XP, and on the higher end units, Vista. With a full operating system installed, most netbooks can run basic programs for word processing,Â spreadsheet creation, and even basic image editing. In an attempt to extend the battery life of these lightweight portables, their specification are generally on the lighter side of the performance curve. Therefore, a netbook will not be the powerhouse system for video and graphics editing. That being said, netbooks can be useful in running many more applications than the average Symbian or Windows Mobile smartphone. Additionally, the larger screen, hard drive, and USB port(s) found in most netbooks allow for even moreÂ usabilityÂ away from home.

Technology minusÂ usability equalsÂ complacency.Â Building a better mouse trap is not throwing together the latest and greatest hardware and wrapping it in an antiquated interface that no one can figure out how to use. Many companies have becomeÂ complacentÂ with regard to theÂ usabilityÂ of their devices. Yes, you can purchase manyÂ smartphones with the best cameras, screens, and technologies wedged into bulgingÂ enclosures. However, failing toÂ orchestrate all of that technology through a user interface that is a symphonicÂ synthesisÂ of beauty, stability, and intuitive design will leave the user frustrated andÂ unsatisfied.

The Achilles’Â heel of the netbook is the Windows Operating System coursing through its electronic veins. Windows lovingly brings some very special gifts to every netbook owner: securityÂ vulnerability, configuration difficulty, and a less thanÂ intuitiveÂ user interface. Yes, a netbook is more portable than a fifteen inch notebook. Yes, the average netbook can handle many if not most of the average user’s portable needs. The question is, is there a device that unifies advanced technology with a beautiful and intuitive interface in order to meet the portable needs of the average user? Steve Jobs would have you believe that the iPhone is that very device.

THE SECRET WEAPON OF THE IPHONE
About a week ago, I decided to test the iPhone as an alternative to a netbook. For a week, I would use my second generation iPhone as my primary Mobile Internet Device. Of course I could browse the web, send and receive email, and consume all the iTunes Music Store media my wallet could handle. However, in order for the iPhone to be a true netbook alternative, I would need the ability to edit text documents, create spreadsheets, and even edit images if needed.

A quick search on the App Store and I was ready to go. For text editing I found an application called, oddly enough, Text Editor by SavySoda. For aÂ whoppingÂ $.99, Text Editor delivers the promise of its name to the iPhone. With the ability to edit in landscape and sync with Google Docs, Text Editor was just what I needed. It is not perfect, but it is definitely workable during those times away from the home system. In fact, I am typing a good portion of this article in Text Editor.

SpreadsheetÂ editingÂ was next on myÂ laundry-list of necessary applications. Once again, SavySoda saved the day. iSpreadsheet, according to SavySoda, is “Like carrying Excel on your mobile.” With Google Docs syncing and support for all of the major spreadsheet applications, I was sold. The $2.99 price tag made theÂ experience even more enjoyable.

Lastly, I needed something for basic image editing. Something like Adobe Photoshop Elements for the iPhone (Are you listening Adobe?). Enter Magic Touch by Nick Drabovich. I was blown away by this application. With such Adobe-esque features as: cloning, smudging, dodging, burning, and much much more, Magic Touch has narrowed the gap of what is possible on this ever expanding ecosystem called the iPhone. Once again, all of this image editing goodness was available for the paltry some of $.99.

As stated earlier, the greatest hardware and software will be useless unless they are coupled with an intuitively easy user interface. This is where the iPhone and Macintosh computing platforms shine brightly like a beautifully brilliant beam of sunlight breaking through a cloud darkened sky. Why has the iPhone overtaken the dark and dreary world of Symbian and Windows Mobile smartphones? It’s all about the UI! Smartphone consumers who for years have been in bondage to a counterintuitive and illogical UI, have been delivered from their captivity by the modern day Moses of Cupertino. Consumer after consumer has raved about the fact that, with the easy to use interface of the iPhone, they were finally using all the hardware and software features of their phonesâ€“features they had never used on their previous phones because the features were too difficult to use or even find.

During this past week, I have found it very easy to use my iPhone as a netbook. With the addition of a few programs listed above, I am just as productive away from home as I have ever been. In fact, it has been nice to carry less weight around with me. I would have to say that Steve was right on when he declared the iPhone to be a good solution for those looking to meet their basic portable needs with a netbook. To be sure, the iPhone is not without its limitations (screen size and keyboard). However, when compared to the current state of the wetbook (Windows netbookâ€“sorry Bill), I mean netbook environment, there is no comparison.

GO AHEAD STEVE, MAKE MY DAY
As long as we are one the subject, let’s think outside the current Apple box for a moment. Assuming that Steve and company wanted to wrestle the millions of netbook customers away from the dark side, what would they do? Well they could produce the MacBook Mini. This new MacBook would have a screen size between seven to ten inches, Â wouldÂ leverageÂ the power of the iPhone’s touch interface, would run a full version of OS 10, would include WiFiâ€“USBâ€“Display-port, and would allow the user the option to connect an external keyboard via Bluetooth. Or, Apple could just allow users to connect a bluetooth keyboard to the current iPhone and introduce the MacBook Mini at a later time. Either way, Steve would definitely make my day.