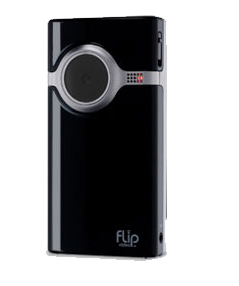 ALL THE RAGE
The Pure Digital Flip Mino is an affordable, highly portable, easy to use, and no frills video camera for the masses. Indeed, The Flip is not without its limitations or detractors. Are their some alternatives for the lateral thinkers who want and or need a smart solution for their budget portable video needs? The answer may surprise you.

PROS AND CONS OF THE FLIP
The specs for the Mino are what one would expect in order to produce acceptable video. Some of the highlights include: a small and light weight design, VGA (640 x 480) quality video at 30 frames per second, four hours of use per charge, touch sensitive controls that are easy to use, and a simple USB connection system. At an Amazon price ofÂ $159.00, the Mino has taken the YouTube video generation by storm. Take a look at someÂ sample video.

There are, however, a few specs that can impact the usability of the Mino in a negative way. The 1.5″ screen will make the framing of a scene more difficult. The lack of an optical viewfinder will make scenes shot in direct sunlight very view within the LCS screen. The fixed focus optics of the Mino will limit the clarity of the image in certain conditions. As a video camera, the lack of an imageÂ stabilizationÂ system is unfortunate.Â The Mino will not take digital stills. Finally, the non-removable memory and battery will limit the amount of time between syncing and charging.

THEÂ ALTERNATIVE, THE CANON SD1100 IS
The Canon SD1100 IS, like the Flip Mino, is a small and very compact video camera. As a member of the Digital Elph family of products, the SD1100 IS packs many advanced features into a beautifully designed palmed sized package. While the size and design are great, the Canon will have to meet the feature set of the Mino to serve as respectable alternative. How does the Canon measure up to its competition? Let the comparison begin. 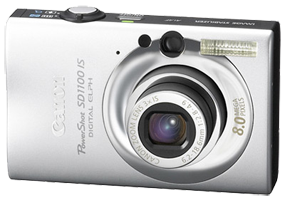 THE PROS AND CONS OF THE CANON
The specs for the Canon read like a Christmas wish list for theÂ amateur or professional photog. Some of the highlights for the Canon include:Â a small and light weight design, VGA (640 x 480) quality video at 30 frames per second, Canon Optics (3x optical 4x digital zoom), TTL Autofocus, Optical Viewfinder, 2.5″ LCD Monitor, Optical Image Stabilizer System, and a replaceable battery and memory. Oh, and it takes wonderful digital stills as well. At an Amazon price ofÂ $159.00, the Canon SD1100 IS is indeed a great value. Take a look at someÂ sample video. Here is also a sample of theÂ Time Lapse feature of the Canon.

The Canon does fail to match the Mino in a couple areas. The Mino controls will be somewhat easier to use and more intuitive. Part of this disparity is due in part to the simplicity of the Mino itself. The Mino does one thing and does it in the simplest way possible. In order to sync the video and images from the Canon, one must connect a USB cable while the Mino includes a built in USB connection system to ensure that the syncing process is simple.

TO FLIP OR NOT TO FLIP
Which product should you purchase? If you need a small and simple video recorder, it is hard to beat the Flip Mino. However, if you are looking for a small easy to use camera that will not only shoot video, but stills as well, you will be hard pressed to best the value and practicality of the Canon SD1100 IS.

STAY TUNED
We will be taking the Canon SD1100 IS to Macworld and putting it to the ultimate test. If it can make it there, it can make it anywhere. Keep an eye on the MyMac website for updates based upon our veryÂ unscientificÂ research.

One thought on “The FlipÂ Alternative – The Battle for Value”