A number of products have hit the market recently to let you watch TV on your Mac. Two of these, both â€œUSB sticksâ€ recently caught my attention, so I felt it was time for a head to head comparison of two of these; the Pinnacleâ€™s TV for Mac HD Stick, and Equinuxâ€™s TubeStick, both very small USB tuners for your Mac that let you watch TV right on your Macintosh. 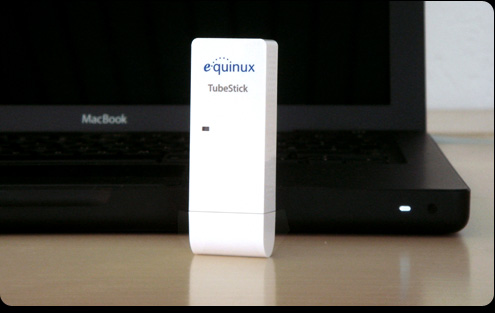 Both device are about the same size, about 3 inches long, 1-inch wide, and 0.5 inches high. Both devices attach to your Mac via a USB 2.0 port, both have a connection on the other end for an antenna or cable input, and both take off-the-air analog NTSC and ATSC broadcast. The Equinux TubeStick also receives digital cable, known as QAM modulation as well, something missing from Pinnacleâ€™s stick. And they both include the same things in the box: tuner, antenna, USB extender cable, A/V adapter cable, install instructions, and a software CD. However, the Pinnacle device also includes a tiny remote control, something I felt was missing from Equinuxâ€™s device.

Installation of software and set up for both devices was rather simple: Install the software, attach the USB device, set a few parameters, have it scan for available channels, and your all set.

Equinux includes all their own software, including the main application called â€œThe Tubeâ€ while Pinnacleâ€™s device is shipped with a copy of Elgatoâ€™s â€œeyetv liteâ€ application for the Mac. (See Donny’s article for more info on eyeTV) Both applications have tuner control, EPG interfaces, and recording of programs. eyeTV lite supports a full program guide through s a free subscription to TitanTV , while The Tube uses itâ€™s broadcast digital TV data.

Both devices recommend a Dual G5 or an Intel Core Duo to view HD content, and I agree that the more power you have, the more things run smoothly. But to truly test which performs the best, I installed both on my 12â€ PowerBook G4 and a G5 iMac, just to see what would happen. I was surprised to see that I could watch digital broadcasts on both devices. While they both struggled some on my G4 with HD content, I found the Pinnacle device worked with digital TV content a bit better than the equinox device. I noticed almost no difference with SD content with either device, as both performed quite well. Both worked fairly well on the G5 iMac, but some stuttering was still present on HD channels. They worked well on Core Duo Intel based machines, although full HD with recording was still a problem. 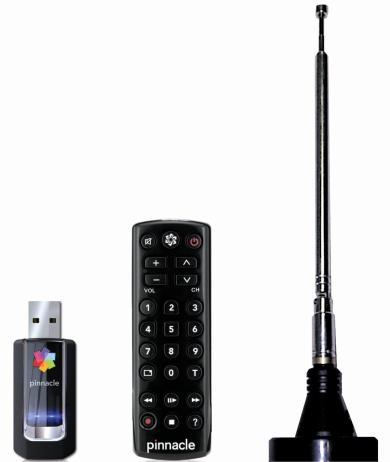 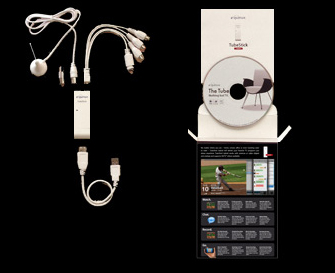 These devices include a wide range of features, and I found them both compelling devices. Comparing features:

While I did not use it much, I did like the idea of â€œChatâ€ in the Equinux device, including now the ability to video chat with iChat while sharing the video from the tuner. For those of you who remember Mystery Science Theatre, this software lets you chat with others watching the same program. I also liked TubeStickâ€™s TV to Go feature that lest you watch your recorded programs online, and remotely manage and schedule you recordings with a web service. However, to use this, you will need your own web storage space. iPhone and iPod sync service is also included with both, see below.

So how did they work? I am fortunate enough to live in a large urban area, so even with the mostly useless little antennas included in both devices; I received about 30 digital channels, and many analog channels. If you live in a less urban area, you may want to use an external, outdoor antenna for better reception. The display of both digital and analog TV signals looked good on both devices, and both recorded programs as OK, but not so well as expected (more below.) Both devices include a composite video cable for external video in, say from a game machine, cable or satellite box, or other external source. This makes recording such video a snap, and that worked well even on my G4 Powerbook.

Input set-up on the devices can be a bit confusing, as there are many choices. You need to tell the device what you plan to watch, Analog (NTSC) broadcast, Analog Cable, Composite video input, S-Video input, Digital (ATSC) Broadcast, and on TubeStick, Digital Cable. Picking the correct one is important, as if you pick Digital Cable, you will miss most of your broadcast digital channels. Likewise, selecting analog will not let them receive digital broadcast. You can switch from one to another, but I found such switching to another a bit confusing, especially on TubeStick, and the rescanning of available channels was well hidden on the Pinnacle device.

On my G4 and G5 machines, recording of programs was not so impressive for HD, but worked OK for analog and SD digital, though I was pushing the minimum requirement some. There were many dropped frames, missed audio issues, sync issues, and a host of artifacts. OK, to be fair, they did say I needed a better machine. However, some of these problems continued when I moved to a newer Macbook Pro as well. I could not help but wonder what kind of machine I would truly need to make flawless HD digital recordings. The bottom line, the recordings are OK, but they are far from perfect. The analog recordings did work well, but then again, they recorded all the noise and issues that come along with analog TV, so not really better. And as of Feb 2009, with the switch to digital broadcast, most of these analog signals will be gone anyway.

These devices use a lot of processing power, even on a good machine. When active, the fans in my Macbook Pro starting running near full speed. Minimum system requirements are a 1.6 GHz PPC G5 with at least 512MB of RAM (although the Pinnacle does say a PPC G4 is OK for analog.) For HD content, you will need a dual G5, or an Intel processor and 1GB of RAM. But for flawless digital recording, you should probably quit all other apps, as both pinned the activity monitor when watching HD digital.

Live pause and jump back features are available on both devices. On the TubeStick, this is a feature that you must enable and disable, and you need to allocate disc space to the program to tell it how much â€œslipâ€ time you want. It was not clear how eyeTV allocated space, as it just seemed to work, but available HD space did fall while time shifted.

The recorded files take also up a lot of space in their â€œrawâ€ format, so if you plan to keep them, you should export them to another format, such as iPod or Apple TV format. There are numerous options for quality, size, and speed of export. A 1-hour show exported in fast mode for the iPod was under 800 MB in size, and took about an hour to encode, not too bad actually. Sadly missing is any editing functions for removing commercials or deleting program overlap at the start or end. Exporting was also a bit of hit or miss, as I noted audio sync issues on several exported programs, which disappeared when I exported again. Here, as in HD viewing, quitting all other apps really helped this work well on both devices. 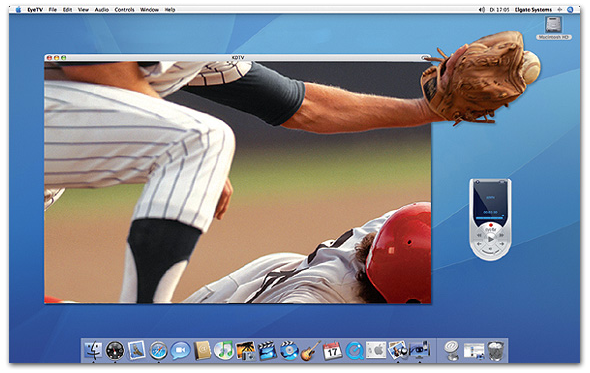 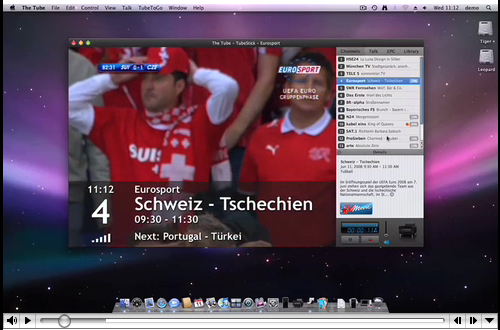 I found TubeStickâ€™s program guide to be, well, nonexistent. Guide info comes from digital broadcast information, so analog broadcast will not have any info at all, and most TV stations are broadcasting almost no digital EPG data it seems. â€œNo EPG data availableâ€ is what was listed on most of my channels. I did not try this with digital cable, but I suspect that no info is sent there either, as digital cable TV systems use a set top box, and they receive their guide info in a proprietary way. The Pinnacle device, using eyeTV, simply offers a subscription to TitanTV, which, as long as you have Internet access, gets you all your EPG info. Neither guide showed an overlay for the EPG. On the Pinnacle device the entire video is replaced with a reasonable looking grid guide, and on the TubeStick, the EPG info is relegated to the side of the viewing window. Given that the TubeStick has other Internet based features like Chat, I am not sure why they did not offer an EPG service as well?

Conclusion:
Overall, I found the Pinnacle tuner to be considerably more sensitive for off-air reception, and the Pinnacle included eyeTV software to be more mature in features then the Equinux TubeStick. However, if you need or want to watch digital cable, then the TubeStick is really your only choice. Both will see (and have already seen) future software upgrades, and both will serve you well to watch TV on your computer. You will not be disappointed with either device.

Pros:
The TubeStick is only $129!!! GREAT price. The Pinnacle is $149, not bad either.
Analog (NTSC), Digital (ATSC), and video TV recording for your Mac
TubeStick receives Digital Cable (QAM)
EPG on the Pinnacle device is good
iChat integration for the TubeStick is very cool
Time shift viewing and program recording.
Ultra portable devices
Transcoding or export to iPod
Remote Control on the Pinnacle

Cons:
Need a LOT of processor power. Even many Core Duo machines will be lacking.
EPG data on the TuberStick device is bad
EPG integration â€“ no overlays
HD recording is not very good
No remote for the TubeStick
I did not like the eyeTV lite advertisements telling me to upgrade to the full version.

UPDATE: OK, RIGHT after publishing this article, Equinux sent me an email with the title: Free one-year subscription of TubeGuide US. It seems now Equinux is offering a guide with their product as well. TubeStick hybrid, equinux’s modern TV solution for Mac, now provides detailed TV listings for US viewers. It is a one year free subscription, which I hope they change to always free, but it bumps them up a 1/2 point in my view. They are still missing a remote, but since I am usually sitting in front of my computer, this is not such a big deal, and they do incorporate using the iTunes remote for some functions.
email – MyMac Magazine – Twitter – Advertise – Reviews Archive – Podcast