Recommending a good book for newcomers to the Mac platform is always tricky. You want to recommend something that doesn’t just cover all the basics but also has some depth as well. A book that only covers the simplest aspects of the Mac interface like how to copy files or connect to the Internet will quickly become obsolete as the user’s skills increase. So the best sort of beginner’s book is one that doesn’t just cover the interface and the operating system but also explains how to use the supplied programs to complete a variety of different projects.

Mac OS X Leopard Edition: The Missing Manual by David Pogue (O’Reilly, $34.99) and My New Mac by Wallace Wang (No Starch Press, $29.95) are books that meet this challenge in completely different ways. Pogue’s book essentially takes an OS-centric view, running through all the different utilities and applications, explaining what they do and how you can use them. Along the way he reveals all kinds of tips and tricks that will make a Mac user’s life easier and more productive. Wang’s book takes a different approach, focusing instead on specific projects and describes how they can be done (mostly) using just the stuff that comes as part of the Macintosh OS. By steadily ramping up the complexity of each project, Wang expands the reader’s skills so that by the end of the book pretty much every major aspect of the Mac OS will have been used in one way or another. 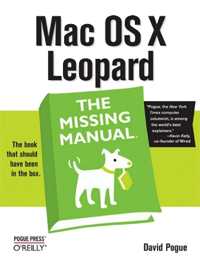 Both books are very well put together. The ‘Missing Manual’ series needs very little introduction, being familiar to practically every computer user in the western world. While there’s some variation among the different titles, they all share the same high production values and although a little pricey, at almost 900 pages you do get a lot for your money. Pogue certainly knows the Mac OS inside-out, and his list of books on the subject could be best described as prolific.

Wang is another experienced tech writer, albeit one less known in Mac circles. His others books have included titles on Visual Basic and file sharing technology. The overall look and feel of My New Mac is on par with other No Starch books, with a clear, open format the delivers a lighter feel to the Missing Manual. The result is something that comes across as a bit less intimidating than the average computer book, certainly something that works in the book’s favour when its target audience is considered.

Give that both books are competently written and nicely produced, choosing between them comes down to deciding whether Pogue’s approach or Wang’s is the best. 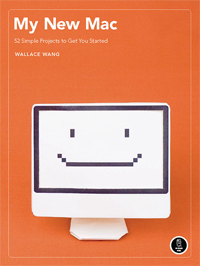 Absolute beginners
Both books have sections that cover the very basic stuff like moving files and emptying the Trash. Both books also make allowances for switchers from Windows platforms, Wang by making illustrated comparisons and Pogue by providing a Windows-to-Mac directory at the back of his book.

Pogue unarguably provides more depth in both regards, so that both newcomers to computing and switchers from Windows should be able to find the information they need to succeed. But Wang is much less laboured about how he teaches the reader these basics, and manages to cram in quite a lot of essential stuff into just a few, easily understood projects. It’s very much the learn-by-doing approach, and it works quite well. By contrast readers of Pogue’s book will have ploughed through over 350 pages before they even open up their first useful application. That’s 350 pages of top-notch content, but it’s still 350 pages.

Of course one criticism of using a project- rather than function-based way of learning the Mac OS is that knowing how to perform a particular project doesn’t necessarily help much if you’re trying to troubleshoot some aspect of the computer’s functionality. For Wang’s system to work it needs a decent Index that will let you head straight to the relevant project so that you can understand how a particular function works. Thankfully, Wang’s book is very well indexed, with many aspects having multiple entries.. For example, if you wanted to figure out how to delete a folder, you could look under either Delete (Folders) or Folders (Deleting) and get the relevant page number.

So while this is a tough call, for the reasonably smart (if not necessarily computer-savvy) newcomer to the Mac platform, My New Mac gets the nod from me as being more succinct, easier to read, and just plain more inviting.

Home/Office
Both books could earn their keep in the home, covering the topics most relevant to home users in some depth, albeit in different ways. But Pogue’s book does rather assume that the user already knows which applications to use to perform what function; Wang’s book starts from other end of things, offering a variety of projects and then explaining which applications you need to use to complete them. This makes Wang’s book altogether easier to navigate and ultimately to use. Less experienced computer users especially will appreciate the step-by-step projects describing setting up e-mail accounts, sharing files, backing up data and so on. So for the home user with limited demands, My New Mac definitely scores very well.

In the small or home office, Wang’s book will also be popular, especially with switchers from Windows looking to quickly tackle basic office tasks. There are several projects that involve Mail and iCal, all carefully chose and well explained. Pogue’s book also tackles these issues well, and in terms of usefulness both books would be appropriate for the small or home office. Neither covers productivity applications like Word, so choosing between them really comes down to personal taste.

Longevity
Pogue’s book scores highly here because of its depth. Even once its basic use as an introductory manual is done with, readers will keep coming back to the book as a troubleshooting guide. Even putting apart the countless tip boxes scattered about, there are several thorough appendices at the end of the book containing a variety of troubleshooting topics such as dealing with frozen computers, fixing disks and so on.

This isn’t to say that Wang’s book lacks value in the long term. There are some excellent projects such as troubleshooting printers and ejecting stuck CDs that comfortably fit into a troubleshooting rather than productivity category. On the other hand the project that describes basic disk maintenance methods is brief, at best adequate in terms of giving a beginner some idea of how to keep their Macintosh in good shape. When all is said and done, Wang’s book isn’t a troubleshooting manual.

Pogue’s book also does well in having power-user projects including chapters on AppleScript, Automator and UNIX; Wang’s book barely mentions UNIX and skips AppleScript and Automator entirely. Now one might well argue that these topics have no place in a book for beginners anyway, being pretty complex topics that easily deserve entire books of their own, let alone chapters. Taken from that perspective, the lack of coverage in Wang’s book is no big deal. But even allowing for that, The Missing Manual is easily the choice for the reader wanting to make a long-term investment and unlikely to buy a second, more in-depth book down the line.

Conclusion
Balancing up these books is difficult because they are ultimately catering to different markets. Mac OS X Leopard Edition: The Missing Manual will undoubtedly be the book of choice for potential power users (or experienced Windows users making the switch). It’s also the one IT support centres will want to have in their tech book collections. It’s a tried and trusted book with depth as well as breadth. So in situations where the new Mac in question is going to be working hard, then this is the book to put beside the hardworking Mac user.

My New Mac on the other hand is breezy and takes a refreshing new approach to the whole computer training process. It doesn’t require any background knowledge, and the projects described are firmly placed at the consumer and SoHo segments of the market. If you’re looking for something to give to family member with their first Macintosh, My New Mac makes a very compelling alternative to the usual OS-centric books and manuals.