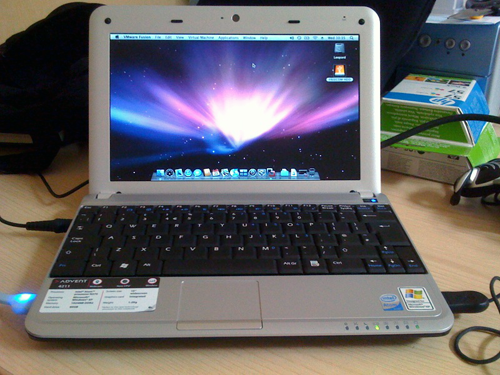 Ever since Steve Jobs got up in front of the World Wide Developer Conference and announced “yes – the rumours are true!” and thereby ushered in the Intel Macintosh age, many of us were tantalized by two diverse possibilities.

The first was the possibility of running Windows natively on a Mac. After all, switching to the Intel architecture meant that a Mac would effectively be a PC, and with some fairly minor differences this has proven to be the case. he existence of Apple’s officially approved Boot Camp software for installing and running Microsoft Windows confirms this, and the clever solutions from Parallels and VMWare allow Windows to run as virtual machines under OS X. But what about the opposite? If Apple had redeveloped OS X to run on the Intel architecture, how easy would it be to run that same OS X on a standard PC designed to run Windows?

It turned out that it would be very easy indeed – principally because the development platform Apple made available to allow programmers to test their work under Intel OS X were in fact standard PCs. Naturally, as soon as the first real Intel Macs were launched, attempts were made to install OS X on conventional PCs.A thriving community and a formal project (knows as OSX86) has worked since the release of the first Intel Macs to provide simple and reliable methods to get OS X working on ordinary PCs.

The issue with achieving this is not overcoming Apple’s inbuilt checks to ensure that a genuine Mac is being used – these are fairly simple to overcome. However, unlike Apple’s strictly controlled and formalised hardware and driver model, the PC market is awash with variable hardware, often engineered down to a price. Drivers are often of poor quality, and of course are typically written only for the Windows platform.

No wonder, then, that the OSX86 movement is a hacker’s dream come true. Hardcore geek fu is often required if you want to take a specific PC and get Leopard running on it reliably – tracking down spurious Linux drivers and recompiling will be the order of the day. Also, to get a PC-capable copy of OS X, you need to hit the torrent sites to get a modified copy of the operating system, and so you are running pirate software as well as breaching Apple’s license agreement.

Little wonder that when Florida PC outfit Psystar started selling plain PCs with OS X Leopardpre-installed (and this week, Apple finally let slip its legal dogs of war on them), the warranty terms in the case of ANY service required the whole machine to be returned to them.

So, in short, it’s not worth doing then? Well, that depends. I recently purchased an MSI Wind, a tiny and cheapsub-notebook computer inspired by the remarkable Asus Eee PC. Despite its Â£280 ($560) price, the Wind comes with a 10″ widescreen display, 1Gb of RAM, 80Gb of hard disk storage and a powerful yet frugal 1.6Ghz single core Intel Atom processor, all packed into a tiny 3-pound chassis.

It turns out it is pretty simple to get OS X 10.5 Leopard on this machine. It took me about two hours to do this afternoon – I added some extra RAM before I started, and while I was in there I swapped the WiFi controller from the default one (which will not work with OS X) to a Dell WiFi card ($25 on eBay) that appears to OS X as an airport card.

Once the hardware was taken care of, I used a USB DVD drive to boot the Wind to a modified OS X 10.5.2 Install disk (known as the Kalyway distribution). Some specific customizations were required, and to get up to a fully working 10.5.4 required careful patching and some specific drivers. However, all of the required work in terms of files and drivers has already been done and made available, as well as step-by-step instructions.

Pretty much everything on the machine now works as if it was made by Apple, with the exception of the 3.5mm audio ports. The Wind sports Intel GMA950 graphics, which are the same as in the MacBook, so Leopard Core Image works fine. Overall performance is actually pretty snappy, and it will even support VMWare Fusion running Windows!

To me, this is a much sweeter machine than the MacBook Air – just as portable, but a fair bit more capable than the thinster. If Apple were to take the Intel Atom and wrap a Jonathan Ive aluminum case creation around it, I think they could easily get away with charging double what MSI wants for it, even without dual-core processing and a full-size keyboard and screen.

And that’s what I find most interesting about the whole OSX86 scene. If you want a reliable, comprehensive and legal computing experience then you should buy a real Mac from Apple – but if you want an insight into how Apple’s products might develop in the future, take a browse through the community forums of the OSX86 project and see what they are up to.