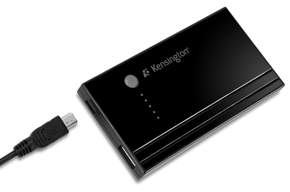 There is nothing worse then being stuck in an airport or on a long plane flight and having your iPod battery run out of power.
Having a rechargeable power pack for times like those is an absolute must, unless you enjoy staring across the aisle at some other guy enjoying his iPod.
The Kensington Portable Power Pack for Mobil Devices (KPP) is a small, lightweight (3.5 oz) device that measures 4” x 2.2” and contains a Lithium-Ion Polymer battery.

The good folks at Kensington toss out these stats.
The KPP will give you:
55 hours of extra iPod music play time (which I did not verify–who has 55 hours to kill?)
Up to 14 hours of iPod video play time (I’ll take their word on this)
Up to 5 hours of mobile or smart phone talk time

I was unable to test the KPP with a mobile or smart phone because I did not have a connector that would attach to the KPP. Kensington sells a USB Power Tip pack with a retractable cable that allows hook ups to a wide range of devices. However, if your device connects via USB, you probably won’t need any adapter.

The KPP comes with a cable that has a mini-USB end that plugs into the “In” slot on the end of the KPP and has a standard USB connector at the other end that will plug into any Mac for recharging. Kensington also includes a handy AC wall adapter with the device.

The KPP has an LED battery gauge that tells you how much power is left in the device. Five blue lights indicate a fully charged unit.

There are several reasons I like this device, but the main reason is you can just plug it into a dead iPod and start using the iPod immediately. Or, you can plug the KPP into an iPod and just leave it on your desk, or in your bag, and it will charge up your iPod to full power. It took about two hours and two LED lights, to fully charge a second generation nano. It took about two and a half, and three LEDs, to fully recharge an iPod classic. So even after you recharge these iPods, the KPP still has power left.

I really like the Kensington Power Pack for Mobile Devices and give it a MyMac rating of 4.5 out of 5. 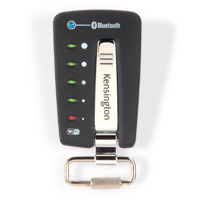 I’ve seen quite a few of these WiFi finder devices and thought it would be a good idea to have one. Last year I bought a MacBook and I’m constantly trying to locate WiFi hot spots, which here in New Hampshire, can be quite a task.

The Kensington WiFi Finder Plus (WFP) is a small device (3.5” x 1.6”) with a sturdy keychain type clip device on the end.

To use the WFP, you simply press the button and a set of LEDs begin cycling up and down until they settle on a signal strength. Five LEDs is the strongest while one is the weakest. The device is designed to detect 802.11b and 802.11b/g mixed network signals. There is also a blue LED near the top of the WFP that lights up when Bluetooth (BT) signals are present.
An added bonus is a small button on the bottom that turns on a mini-flashlight located at the end of the unit.

Seems simple enough to use, which it is. The problem is I find this device to be of little value and let me explain why.

Sitting in my house next to my G5, which is connected to my Linksys 802.11g router, I got a signal strength reading of two LEDs. Press the button again, and I get three LEDs. Push again, I get one LED. All the while the signal strength in the finder on my G5 shows a solid five strength.

As I type this on my MacBook, I have signal strength as reported by Leopard of five bars in the finder and using Coconut WiFi I get the strongest reading possible from that program.

But the WFP only shows one LED, the lowest strength. Also, I have Bluetooth turned on (I’m using a BT mouse) and the WFP doesn’t even see it. I take the device over to my Mac, which is using an Apple BT keyboard, and there is no indication of BT on the WFP. I went down to my basement and held the unit right next to my WiFi router and was able to get a reading of five LEDs. Kind of defeats the whole purpose if you have to do that.

Over the course of the next couple of days, I took the WFP to work and other places. At work, where we have a large network, the WiFi finder did not show anything? However, it did show a BT network where I cannot locate any BT devices in the area. Also, when it does show BT, it won’t show anything else, which is a definite downside. In the downtown area where I live we have free WiFi. When I pressed the button on the WFP standing in the middle of town, the unit did not indicate that any WiFi was present.

If it had one LED that simply indicated if WiFi was present, that would be enough, but you expect more from the Kensington device.

Over all, the best feature of the Kensington WiFi Finder Plus is the flashlight.