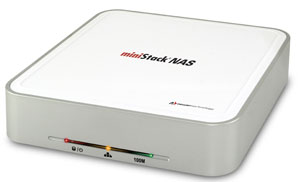 After my disappointing experience with a NAS I tested a few weeks ago, I was really looking forward to evaluating this unit. To recap, a network attached storage (NAS) device is a shared disk drive that uses your internal network, or in some cases the internet to share data with multiple computers. It’s a great place to store backups, large media files (such as for home theater systems), archived multimedia projects, or anything else that requires larger than average amounts of storage space.

The miniStack NAS from Newer Technology is a variation on this theme. By variation, it means that the technology used in this device does things a little differently. Let’s get past tehe few things the miniStack NAS can’t do, especially because for most of you, these limitations won’t be important to your particular applications:

1. Most NAS devices can share their resources across LANs (local area network) and WANs (wide area network). The miniStack NAS can only share data on an internal LAN.

3. At present, because of Leopard’s Time Machine feature not working with network attached drives other than Apple’s own Time Capsule, miniStack NAS will only run Time Machine when connected via USB as a single computer external drive.

The first item is not really a biggie unless you need to access your NAS from a location away from where it is installed (i.e., using the internet to access your NAS). Frankly, opening a storage device to a wide area network (the internet) can be one big, fat security hole, and not being able to access your NAS outside of your LAN is, for the vast majority of users, a really good thing.

The second item, well, I’m sure there’s a valid reason for this, but I could see there could be times when I might want more than one machine on my network to have read-write capability.

The third item could be a deal-breaker if you need to upgrade (or have already upgraded) to Leopard (MacOS X 10.5). However, I’m sure that fixing this is a high priority with Ximeta, the developer of the NDAS chipset (see below). The good news is that until such time as those drivers or that functionality becomes available, you can connect the miniStack NAS to your primary machine as an external USB 2.0 drive, and run Time Machine like any other external USB drive. I was personally unable to test this because I am still running Tiger (Mac OS X 10.4.x) on all of my Macs.

The miniStack NAS doesn’t use conventional TCP/IP connectivity, instead using a technology called NDAS, developed by Ximeta. Because it doesn’t use conventional networking technologies, the creators of this protocol were able to design for maximum throughput, so even though it does not have a gigabit network interface, most of you will never notice it. My own home network is a mishmash of things, including 802.11g wireless, and Netgear power line ethernet adapters (which I use to get a fast LAN connection to my Mac mini media server in my living room). When playing a ripped DVD stored on the miniStack NAS, I never saw any frames drop or other evidence that network performance was suffering. I copied my 76 GB iTunes Music folder to the miniStack NAS in roughly three hours. That’s almost as fast as copying a similar sized folder to a USB 2.0 external disk. Newer Technology claims this device can move files up to six times faster than a more conventional network file sharing techniques. I viewed the same movie wirelessly on my MacBook didn’t see any dropped frames.

One thing I really like about the miniStack NAS is that it appears on your desktop as if it were a local drive–not a network drive. This is important because unlike most NAS devices, the miniStack NAS doesn’t have a web interface for configuring. Instead, you can partition, format, and maintain the drive just as if it were an internal or external FireWire/USB drive. Very cool and very convenient.

The back panel has a power switch, power socket, two DIP (dual inline package) switches to configure the cooling fan, a 10/100 ethernet jack, and a USB connector (yes, you can also connect the miniStack NAS to your computer via a USB 2.0 connection, but not at the same time as the ethernet cable is connected–the manual is very explicit on that point).

The miniStack NAS comes bundled with a number of excellent applications, including MyMac.com sponsor Prosoft Engineering’s DataBackup 3 (which I reviewed a few months ago on this site), Intech Hard Disk Speed Tools, and for Windows users, Novastor’s Novabackup. Another 2 gigabytes of shareware and freeware is located on the drive in a .dmg installer package.

Newer Technology offers the miniStack NAS in a number of configurations from a drive enclosure with no disk for $79.95–$89.95 with the software bundle), up to the $329.95 750 GB drive, as this device was configured. I suspect this enclosure will be upgraded sometime soon, as it still uses a parallel ATA (PATA) interface, and PATA drives are becoming harder to find, having been superseded in most cases by the much faster serial ATA (SATA) disks. Again, this is not really a negative thing if you buy a reconfigured drive from Newer Technology. Who cares what’s inside the box if the box performs to your satisfaction.

I was debating mentioning this, but I always try to put myself in the place of a typical Mac user, going through what my employers refer to as the “box opening experience.” Frankly, setting this device up was a tad inconvenient, as the Macintosh drivers were not included on the installation CD (it only had the Windows drivers) packed with the drive sent to me, and they are not available for download from Newer’s website. Resourceful person that I am, I did a Google search, and found the installer at Ximeta’s website. Once I installed the drivers (I was later provided a link to the drivers by Newer’s tech support, and the drivers I downloaded were identical to what I previously downloaded from Ximeta’s site) and rebooted my G5 tower, setup couldn’t have been easier. The multi-character ID code and the Write key code were on a label attached to the product packaging, as well as on the bottom of the device itself. The manual is well-written and attractively designed using lots of color when needed–something more economical to do these days, thanks to digital presses.

As Rich Lefko did a review last October of a similar device from OWC, I won’t include screen caps of the installer software. Suffice it to say, it was really easy to do.

I also have Parallels running on my MacBook, so I installed the miniStack NAS Windows drivers, which took a while (there was some brief confusion with NDAS SCSI drivers), and after making certain my G5 desktop machine was reset to Read Only, I attempted to connect to the miniStack NAS from Windows XP on my MacBook. No good. The software kept telling me the disk was mounted, but I sure couldn’t see it. Finally, MCSE (lapsed) holder that I am, I had one of those very special aha moments. The disk was formatted completely for the Macintosh! In its present state, there was no way it could appear on the Windows desktop! Doh! Stupid Larry! Stupid Larry! I went back upstairs to my computer room, launched the NDAS utility to reconfigure my G5 as a read/write source, then went to the Applications>Utilities folder, and launched Apple’s Disk Utility application (this operation could also have been performed with the bundled SpeedTools Utilities application, which includes a module called “Drive PC”–your choice). Once I partitioned the disk, formatting the one partition for Mac and another for Windows, I relaunched Parallels (and Windows XP Pro) on my MacBook and once I performed the necessary device registration, the Windows partition of the miniStack NAS popped up just as nice as you please. I copied a ripped DVD file to the Windows partition and viewed it, routed through my 802.11g wireless router, on my MacBook, using VNC with nary a missed frame or any artifacts that would indicate the miniStack (or my wireless network) couldn’t keep up with the demands of DVD video.

In summary, the miniStack NAS is a viable alternative to a conventional NAS, as long as you understand and accept up front some of the minimal limitations, in particular the inability to connect more than one Mac at a time in a read-write configuration. It’s fast, stable, and whisper quiet. I never missed the fact that the drive didn’t support Gigabit ethernet, the parallel ATA disk was plenty fast enough in real world conditions, and the bundled software was first-rate. You can’t ask for more than that. My MyMac.com rating reflects the connection limitations, and that the Mac drivers were not included in the package (after a series of email exchanges with Newer Technology, it was determined that I was given an early production model whose driver CD was incorrectly configured). It’s up to you to decide if these minor issues might affect your buying decision.