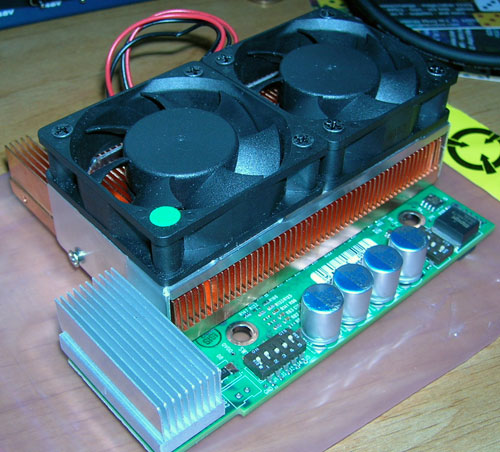 Why upgrade an older computer? Especially one thatâ€™s over 4-5 years old? Why not just get a new Mac and keep up with the Jones? Iâ€™ll tell you why. Macs are expensive. Especially if youâ€™re talking about replacing one older tower with another. The price for a new Mac Pro without any bells and whistles is $2200. Thatâ€™s bare minimum and adding anything like hard drives (which youâ€™ll need new ones of as all new towers are using SATA instead of ATA) memory, wireless (yes the Mac Pro does not come with an Airport 802.11x card), etc, is going to drive the price up even more. You can certainly go cheaper than that. You can get an iMac or a Mac Mini for less, but if youâ€™re used to the expansion option you have with a tower, remember that youâ€™ll be forced to go to all external devices (which take up more room AND cost more as well) with either one of those choices. If you have options for upgrading your processor, and the cost does not exceed around 25% of the cost for a new machine, it can be more than worth it to extend the life of your current computer for a few years.

If youâ€™re computer is REALLY old, say before the advent of the G3, then it just wonâ€™t be worth putting any real money into it. Bite the bullet, get either an Intel Mac or at least a G4 PPC Mac (and then upgrade it!) and join the ranks of the OS X family. On to the review.

First off, I owe Mike Lowdermilk of FastMac an apology for how long it took me to write this review. I met with him and expressed an interest in getting a dual 1.4 GHz G4 processor upgrade kit from FastMac LAST Macworld and we played telephone/email tag for a few months and it finally showed up in April just in time for a medical crisis to hit the family. After that one thing leads to another and here we are in December with no review written yet, Certain members of the MyMac family (coughâ€¦Nemoâ€¦cough) started to remind me that the 2008 Macworld was coming up and any promised unfinished reviews needed to be completed.

So there I was, a relatively new 2.16 GHz Core2Duo iMac sitting in front of me all shiny and bright, and now I had to brush the cobwebs off a 933MHz G4. I wasnâ€™t looking forward to the amount of time I was going to have to spend researching and testing and in the beginning, I was correct. It was dreadfully dull. Trying to get benchmarks off a 5-6 year old computer when a much faster computer is right in front of you is difficult. However I learned something along the way and Iâ€™ll get to it eventually. But letâ€™s talk about the Processor upgrade from FastMac and the computer it went into.

As I said, the computer that I used for this review is a standard Apple QuickSilver G4 tower with a 933 MHz G4 processor. Here are the basic specs:

This machine was the beeâ€™s knees (as my grandmother used to say) back in the day but is laughably slow now. It is capable of running 10.5 Leopard so since I had two identical 250 Gb hard drives in it, it seemed to perfect way to start out the test. So I wiped both drives, installed 10.4 Tiger on one and 10.5 Leopard on the other. Put fresh installs of iLife 08 and iWork 08 on each as well along with a licensed copy of the latest version of QuickTime Pro. I also went out and got fresh copies of XBench (version 1.3) and Maxonâ€™s CineBench and put the old workhorse through its paces. Unsurprisingly, the 933 didnâ€™t fare so well against the Intel iMac or the baseline 2.0 GHz G5 that Xbench uses.

The G4 is outmatched by the dual G5 benchmarks and woefully slow compared to the Intel iMac. One thing I found interesting was the User Interface test results between the Tiger and Leopard releases of OS X. Most of the results are plus or minus 10% or so, well within the margin of error, but the UI result is significantly lower in 10.5 than it is in 10.4 for the G4.

The Maxon Cinebench results were much the same. I donâ€™t have the results from a 2 core G5, but I do have them from an Intel Core2Duo iMac and used that for a basis of comparison. One thing the Maxon test does is test both processors separately and in a pair for rendering images. Naturally the 933 G4 being a single processor unit didnâ€™t do that part of the test. The 933 G4 was hopelessly outclassed but the much newer Intel Mac and that shouldnâ€™t come as a surprise. I also ran a number of applications to test the speed of the existing processor and would do the same for the new one once installed. 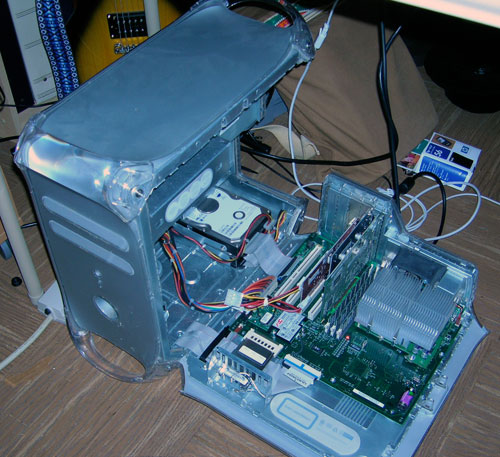 Next up was installing FastMacâ€™s dual 1.4 GHz upgrade processor. I wasnâ€™t sure what to expect as far as the actual installation went. I had read of other upgrades that involved re-using the heat sync from your original processor or applying thermal grease on top and some of the difficulties or damage that people had done in applying either too much or not enough. FastMacâ€™s upgrade was a breeze by comparison. The AGP upgrades include a fan (or in the case of the dual 1.4 GHz model, two fans) to cool the processor instead of the heat sync and I was originally concerned that it would make the computer excessively noisy. Absolutely nothing to worry about, as the two fans are so quiet that even with the case open, I couldnâ€™t hear them. Of course the fans installed in the QuickSilver G4 towers are pretty noisy to begin with, so itâ€™s possible that it just drowned out any noise from the processor fan.

An odd thing about this upgrade that first puzzled and alarmed me. When you do the â€œAbout this Macâ€ is the Apple menu, it reports that you have two 0 GHz G4 processors. Apparently since Apple never used this exact processor in any of their machines (the closest would be the 1.467 Dualies), OS X is not quite sure what to make of them. It runs great, just looks odd. Back to the installation.

I installed the processor and restarted the Mac. Nothing. No bong, no fans running, nothing. I started re-reading the literature that came with the machine and looked at the switch settings on the processor itself. Because this upgrade can be used with many different machines, you have to make sure that the processor speed switches match up with the proper bus frequency (in my case 133 MHz) and I had not done so prior to installation, DOH! I set it to the proper speed and again started up the Mac. AH, now that was the sound I was looking for.

I re-ran the Xbench and CineBench tests that I had run before and here are the results:

Here are the results of the Maxon Cinebench tests with the 933 MHz and 1.4 GHz G4 processors and for comparison sake, my 2.16 GHz Intel iMac.

Itâ€™s fairly obvious that even with the dual G4 upgrade, a 5 year old computer isnâ€™t going to keep up with a new one. Keep in mind however that the playing field is hardly fair and the Dual G4 still has some pretty impressive numbers compared to the single G4 it replaced. Nearly twice as fast in the OpenGL and single processor tests and almost three times as fast when the second processor is taken into account.

Last up was a series of applications I had chosen to test how fast the Dual G4 was against the Single. Everyone seems to love to use Photoshop for these kinds of things, but Iâ€™m not that great at using it so I chose to use the kinds of applications that most people would have in a Mac in their average homes. The tests consisted of importing a CD into iTunes (Pink Floydâ€™s Animals) as a 256k AAC file, then burning it back to a CD (RIAA, please note all four CDs were then destroyed), converting a 5:41 MPEG-4 movie into a standard QuickTime file, and lastly, compressing a 10:30 movie to the web with iMovie 06 (iMovie 08 would not install on a 933 MHz G4 machine).

Where the upgrade made the most difference was in handling video. Conversion times dropped in half. Performance would have also benefited Iâ€™m sure with an improved video card, but then youâ€™re starting to get into the upgrade or trade in scenario.

Some things a processor upgrade canâ€™t change, like disk burning, but in these tests the FastMac Dual G4 upgrade showed that it made a significant difference in everyday tasks that an average Mac user would use. It isnâ€™t going to keep pace with an Intel Mac, but most Mac users donâ€™t need that kind of power. If you want to save a lot of money, and make the most of what you already have invested, check out the G4 processor upgrades at FastMac.

I give the FastMac AGP dual 1.4 GHz processor upgrade a 4.5 out of 5. I almost (almost that is) wish I had gone this route when I bought my iMac and saved up for a MacBook Pro instead.