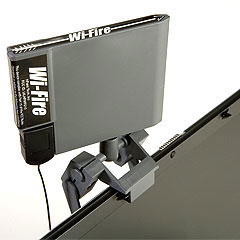 hField Technologies got its start when founder Curtis MacDonald, then a student at Lehigh University in Bethlehem, Pennsylvania, moved into an off campus apartment just out of range of the university’s wireless network. A radio hobbyist, he decided to create a Wi-Fi transceiver with longer range and a more directional antenna. With other students asking him to build additional units for them, he realized he’d stumbled on an opportunity.

Wi-Fire became a project in Lehigh’s Integrated Business and Engineering Honors program. Other students joined the Wi-Fire team, and together they won the university’s 2004 Student Entrepreneurship Competition. Over time, the project received over $40,000 in grants and lots of advice from local economic development agencies and Lehigh University. In 2005, hField Technologies was incorporated, a business plan was developed, and final development of the product began. FCC certification was received and the product was first offered for sale in September 2006 for Windows XP.

With the majority of computers running Windows, releasing it for that platform was obvious but many of the journalists and photographers initially covering the product had one request for hField: a Mac version. These on the go journalists helped hField identify their real target market – the “Seriously Mobile Computer User”. hField accelerated the development of the Mac version and released it in August 2007. According to hField the new Mac version was even more well received, and had a halo effect on the Windows version. “Apparently, PC users also see Mac users as setting the trends.” stated a company representative.

The Wi-Fire antenna’s base can be shaped into a table stand or hung on top of a laptop display and the antenna can rotate 360Â°. The part that hangs on top of a laptop display is padded, but the part that rests against the backside is not. I chose not to hang it off my PowerBook G4’s display because I did not want to risk scuffing it. I would prefer that both ends were padded.

Wi-Fire’s strength is its range. Past 50 ft, AirPort connections start to get weaker and a little more sporadic but the Wi-Fire is still going strong. Wi-Fire is very good at picking up signals at this range that AirPort just can’t, but this is also a potential weakness. Being good at picking up distant signals also, in my experience, makes Wi-Fire more susceptible to interference. On top of this, I also found the “directional” antenna to not be very directional.

I tested Wi-Fire in 3 environments: short range, medium range with many nearby wi-fi routers, and longer range with a single wi-fi source.

At long range I used a nearby library that was isolated enough to minimize interference from any other nearby wi-fi sources. In all corners of the parking lot and everywhere in between, Wi-Fire’s reception was clear and strong with good performance. There was an occasional signal hiccup, but it was definitely useable. This situation is comparable to what could be found on a farm or other rural environment. Wi-Fire is well suited for this.

Medium range would likely be the most frequent use for most users. This was a typical suburban neighborhood, full of wi-fi routers named “linksys” on channel 6, which meant for best performance something not on channel 6 had to be chosen. Fortunately an immediate neighbor has one on channel 1 and this was the one I used. This was where I used Wi-Fire most, and where it was hit hardest with an interference test.

Performance and reliability varied on a day by day basis, and for whatever reason it worked better at night than during the day. Some nights it would work great, and some nights it wouldn’t work at all. On those occasions it didn’t matter which direction I pointed the antenna in. Most likely there were environmental and interference factors affecting usability. This is exactly why I wish that the antenna were more directional or that the hardware was a bit better at filtering out stray signals. Not being an engineer, I’m not sure if what I wish can be done or if it may be cost prohibitive. When working, web pages made of many small files loaded quickly, with performance on par with an average DSL connection. Streaming video or large file downloads, greater than 10 MB, were another story. They would occasionally time out and fail, rather than complete every time. Consistency is not something I got from Wi-Fire in this environment.

At short range, Wi-Fire is slightly slower than 802.11g AirPort Extreme due to USB bus overhead. Typical network traffic takes roughly 20% longer via Wi-Fire than with AirPort Extreme. Since this is not Wi-Fire’s intended use this really doesn’t count against the Wi-Fire hardware, but it’s a bit of a strike against the Wi-Fire’s software since the installer sets it up to automatically launch at each login. You’d expect this to be done using an entry in the Login Items section of the Accounts preference pane, but it uses an entry in /Library/Preferences/loginwindow.plist. Deleting it doesn’t stop the auto launch as it will be put back in by the Wi-Fire Connection Manager application if it sees it is missing. I would expect that typical Wi-Fire users would not keep the hardware permanently connected, preferring AirPort Extreme at shorter range, so with the way the Wi-Fire software currently functions it’s a bit annoying that you have to quit it after every login if you don’t want it running.

The reason for the Wi-Fire Connection Manager application to launch at login is because it is not just used for setup. Contained within it is the code that provides the connection between the kernel level driver and the hardware. If it’s not running, Wi-Fire doesn’t work. This is a little counterintuitive, as Apple’s AirPort works without having to leave the Internet Connect application open. 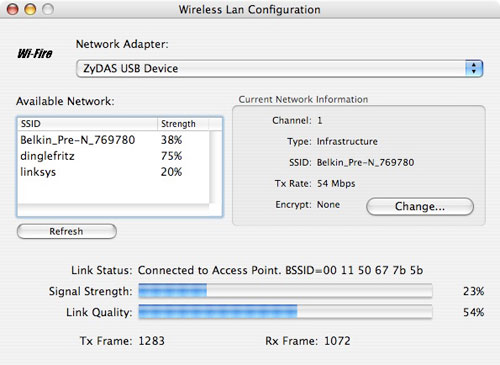 For those accustomed to the simplicity of AirPort, the Wi-Fi Connection Manager won’t look very familiar. The software is rather rough around the edges. It feels a bit like the software that is supplied to a company by an Asian OEM before any changes are made. Bad grammar and wording that doesn’t quite make sense is pretty easy to find. The main window is fairly straight forward, but non-power users’ reaction to the configuration sheets where the connection is tweaked and any needed login info is added will will quite possibly be “Huh?”

On the left side of the main window (not resizable, unfortunately) is the list of available wi-fi networks. Signal strength percentage is listed, but not an indication of whether a network is open or password protected, or what channel it is on. Below that is a manual refresh button. To connect to a network, select it on the left then on the right click the “Connect this site” button. If it is an open network it will connect, but if it is protected (states “Encrypt: On” on the right) you will get a message that states “You have selected to connect to the WEP encryption network. Do you want to use the previous WEP setting?” with yes and no buttons. 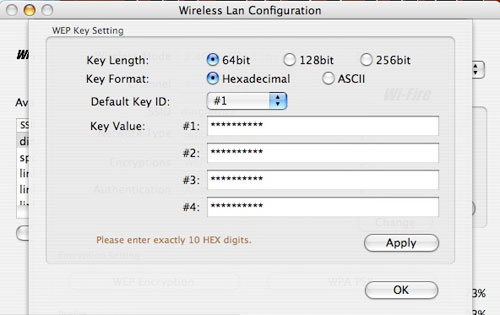 If you need to enter a password you will encounter the WEP Key Setting sheet. This is a bit more complex than an AirPort to AirPort Base station password. Power users and those who connect to a non-Apple router will probably know what to do here, but some users will not. There are 4 password entry boxes, although only the first is needed in most situations, and buttons to select hex or ASCII password encoding and the encryption bit rate. It would be nice if the documentation explained more here, such as the Network Equivalent Password for an AirPort Base Station and how to find it and also a basic explanation of how to figure out what to do with a non-Apple wi-fi router. 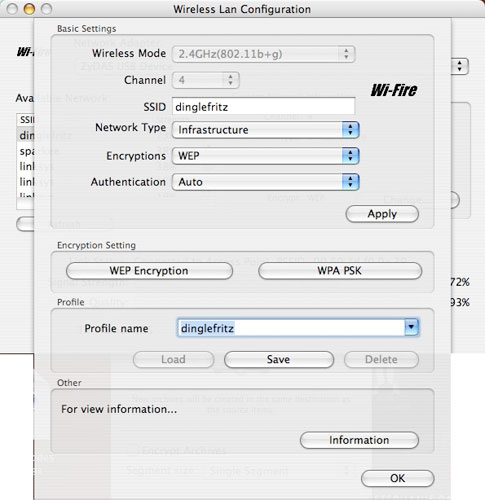 The Basic Settings sheet isn’t one that appears to be needed unless you need to get back to the WEP Key Setting sheet, which is accessed with the WEP Encryption button.

Wi-Fire can be a very useful product for people who need something with longer range than AirPort, but it’s not without its shortcomings. The hardware is pretty solid, but the antenna is not as directional as I would like and it appears to be more susceptible to interference than AirPort. The software could use a lot of improvements, but fortunately hField is aware of this and has been very open to suggestions. The Wi-Fire Connection Manager should be split into two parts: a faceless background application (the auto launch of which should be optional and moved to the Accounts system preference) to operate the connection and a setup application. The setup application window should be resizable, and the Available Network section should also indicate if a network is open or protected and what channel it is on. Overall the interface needs to be simplified and plain English should be used to make it easier for people to figure out. The documentation should also go into much greater detail, and basic online help should be added. The issues with the software, which could be quite frustrating for the average user, are the key thing that bring Wi-Fire down to a 3 out of 5 rating. This product is an early version with a lot of potential. It should only get better.