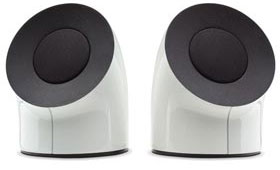 Ok, I was intrigued by this unique idea, speakers that do NOT connect to the audio output jack on your computer, and did not use the already overcrowded USB, but rather are bus powered, getting power from your computer, connected to the FireWire port instead. But why do I need this? Every computer I have ever owned had an audio output port, and so far, I have not had reason to dislike the audio coming from it. I wanted to know why I needed these over other USB or direct audio speakers.

So I started iTunes, kicked off The Beatles LOVE soundtrack, and was ready to find out why. Music came pouring from my rather good Sony desktop speakers, which I immediately unplugged. I knew what they sounded like. Audio switched to the rather poor speakers inside my iMac G5, and it was time to put a stop to that lousy sound by hooking up these cute little things from LaCie.

Packaged well, much like a MacBook computer from Apple, in a small black box, these (5.3″ high by 3.9″ wide by 3.5″ deep) white and black speakers were easy to hook up. Well, sort of. I simply plugged the already attached FireWire cable on the â€œMain Speakerâ€ into my Mac. Then, from the secondary speaker I took the audio cable and connect it to the main speaker. That is all there is to connect. There is no power brick and no batteries are needed because these will get their power and audio from FireWire. Listed as the worldâ€™s first bus-powered speaker, the small, 8-watt amp (4-watts per channel) is powered directly from your computer via FireWire. For me, one less AC power brick is an immediate plus right off.

Unfortunately, if you start with the wrong speaker, the audio wire on the secondary speaker looks EXACTLY like a standard audio plug, just like the one you might expect to connect to the Macâ€™s audio output jack (except that it is a mono plug.) And, if you do plug this into your Macâ€™s audio jack, you will get audio, albeit very soft and only form one speaker, which should be a clue that something is wrong. (Perhaps this wireâ€™s plug should have used a different type of connector?)

So, why was sound still coming from the Macâ€™s speakers if these were all attached correctly? What did I forget? Turning to the included Quick Install Guide, I saw that they were indeed installed correctly. But reading a â€œNoteâ€ lower on the page also said that if you do not hear any sound, you need to select the speakers manually. The Mac has a manual speaker selection? This was new to me.

Yes, this is done in System Preferences>Sound>Output. This was a place on my Mac that I had never been to before, and sure enough, I can now select either â€œInternal Speakersâ€ (or Audio Out if you have other speakers plugged into the Macâ€™s speaker jack) or â€œLaCie FireWire speakers (2491)â€. So I switched it to the FireWire selection and immediately music poured loudly from these little gems. But now which speaker was right and which left, as LaCie labels them Main and Secondary instead? I opened an audio clip that has audio only on the right channel and it seems that the one with the FireWire connector goes on the right. Of course, I got them backwards. Hey LaCie, a small L and R on the speakers would be nice.

Despite their small size, the sound was rather good. These will not compete with higher end audio speakers costing hundreds of dollars, but compared to many sub $100 speakers for computers, including direct audio and the USB versions, these stand up quite well. Input signal is digital at 24bit / 96kHz, a fact of which most will not care. But, if you use an older PowerPC Mac, these connect via the Midi FireWire Control Panel, and that must be set correctly. With a frequency response of 90Hz-20kHz, midrange and highs were clean and clear, and typically lacked that â€œtinnyâ€ sound many small speakers of this size suffer. Although, some of that tinny sound did manage to come through on a few songs with strong treble passages. Bass response was weak at the low end, no surprise given the small 2â€ â€œhigh excursion neodymium driverâ€ speakers inside. But the lower end of the midrange was strong and it typically made up for that missing bass. Overall volume was on the high side and these speakers played considerably louder then other USB and audio speakers at the same computer volume setting. You may have to turn down both the computerâ€™s master volume setting as well as the apps volume (like in iTunes) to get a level low enough for a environment like an office cubicle or at home at night. The speakers themselves have no volume control. Distortion was low, unless you turn them up very loud, at which point the small amp started to clip and the small speakers could no longer handle that much drive. That said, these will put out a good amount of volume before that happens, especially considering their size. In general, I was surprised that such a small package could sound this good.

There is a CD included, and for Mac users, it is not needed as it simply contains documentation, products, and accessories folders where you can register your product, or buy the optional power supply, cables, and even a FireWire card should you need one (why did you buy these speakers?) These will also run on Windows machines, and the CD contains a setup program to install the necessary software on that machine before they can be used. They worked fine on my Windows XP computer, but LaCie says they are not Vista compatible, and I did not try. 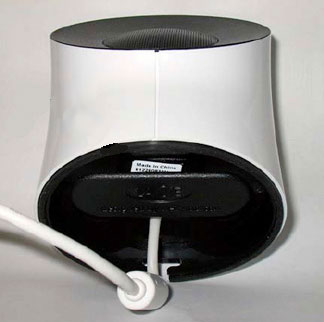 On the bottom of the main speaker is an â€œaudio inputâ€ plug where you can connect an external audio device like an iPod, or a computer without FireWire. A small interconnect cable is included in the box. To use such a device, the speakers need to be powered. That means you can leave them connected to a powered computer (so the FireWire power is active), or, to use them stand alone, you will need an optional external power supply. There is a connector for that on the bottom as well. Still connected to my Mac, I connected my iPod to the audio in line, and pressed play. Yes, if you turn on both audio sources, they will both play through the speakers together. Pressing stop on iTunes allowed me to listen to my iPod through the speakers, and again, they sounded equally as good from the iPod. I am bothered however that the external power supply is an option. Given their $100 price tag, LaCie should have included it for iPod users or laptops that do not have FireWire. Of course, if you do not have FireWire, why would you buy these? But still, you might want to carry them with you for portable use.

The look may not be for everyone. LaCie likes to do outlandishly designed products (have you seen that USB hub?), and these are a little strange for speakers. To me, they look like miniature air vents as seen on a boat or ship. And while I liked them, others who saw them thought they were a bit odd. The outside is a glossy white with a black â€œcircleâ€ where the speaker sits on the front, twisting the cylinder shape forward to face the speaker to the front. I was reminded of a slinky for some reason. On the bottom is a rubber ring that keeps them from slipping and sliding on the desktop. Cables come out the bottom as well, through a small slot to allow the speaker to sit flat on the desk. I was disappointed at the length of the included cables. If you computer is not close to where you screen is, or is on the wrong side of your desk (since the FireWire cable is on the right speaker), you may need an extension cable. The wire between the speakers could stand to be longer as well.

I also wanted to know if using the speakers effected my FireWire connection. Since I have drives connected to the other FireWire port, I wanted to find out if these caused problems with the audio. I copied a 284 Mb folder from a FireWire drive to the internal drive with music playing, and again while not playing, and repeated this several times. Given the relatively small amount of bandwidth needed for audio, I did not expect a difference in time, but would I hear the music cut out as the disk drive needed more bandwidth? With music playing, the average transfer time was 28 to 29 seconds, and no audio cut out or distortion was noticed at all. Again with music not playing the average was about the same, so it appears that this does not impact drive use at all, and hard drive use does not affect the audio.

So back to my original question, why these over other speakers in this price range? The small above issues aside, compared to other small speakers, these performed as well or better than most others in their size and price range. And the lack of yet another a power brick is a strong plus. If you are like me, there are no free plugs available anywhere near your computer, and yet another wire missing from the desktop is a good thing too. And my USB is already overtaxed, so I do not want speakers sucking up that bandwidth or power either. Their small size is also a plus, as is the ability to connect a secondary audio input. But what about that FireWire connection, does it really make a difference? The obvious argument that this is an all-digital connection to the speaker so it sounds better must be taken with a grain of salt. These speakers are nowhere near the quality and fidelity one would need to ever detect any difference between the supposed noisy analog output for speakers and an all-digital connection. And besides, the connection to the secondary speaker IS an analog connection anyway. Hello? But if your need is for small, good sounding set of powered speakers that do not require AC power, are easy to install, and your USB is already busy enough, these are a good choice for you.

MyMac rating: 4 out of 5 stars