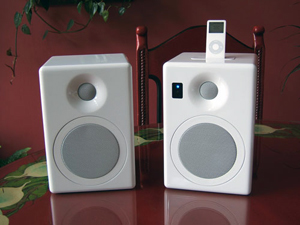 The very first thing you will notice upon opening the box containing the Sierra Sound iN Studio Dynamic Sound Smart Speakers is the fit and finish of the cabinets. My set came to me in white. They are also available in black, and red. I like the starkness and modern feel of the white color used, but when I saw the very classy black, and the high voltage red I thought that any of these models would be welcome in my rather eclectic home. The edges and corners are smooth and curved nicely giving a modern and pragmatic look to the speakers.

Sierra Sound uses tough steel mesh over the speakers and tweeters which should protect those components should the unthinkable, such as poking an umbrella through the speaker, happens. I like the way the tweeters are slightly beveled inward giving the cabinet face a multidimensional feel. The white piano-finished paint is bake-hardened on to the unit which should keep the speakers looking bright and new for a long time. And they are sized proportionally (10 3/4″H, 7 1/2″W, 8″D) to give the speakers a chance to do their thing efficiently. The bass ports in the back help enlarge that sonic range, while the tightly fitted speakers and tweeters project their frequencies easily. Weighing in at just over 23 lb. these units are built tight and right. With their built-in 50W dynamic bi-amp, get ready to rumble, but clearly.

Installation was simple. I made sure I read the manual, a whole four pages with a large readable diagram on the last page. The diagram had all the features listed with arrows pointing at the various controls. jacks, and connectors. I love big diagrams like this when I get a new piece of equipment since I’m a visual learner. I’m also a very literal type, so if there’s anything different in the diagram from the device itself I’m not particularly happy about it. In this case there was. 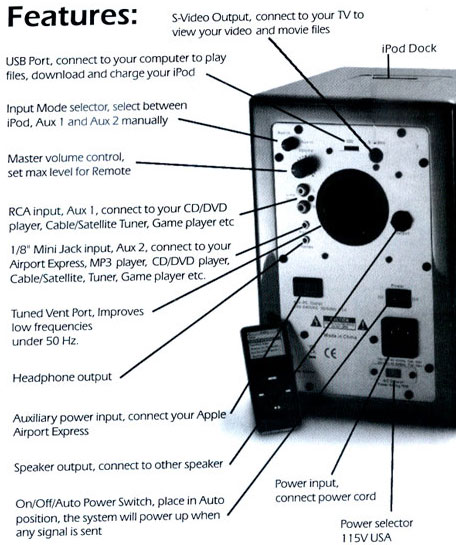 The diagram shows the Input Mode Selector, used in selecting between an iPod, Aux.1 and Aux.2 manually, to be a knob. On my speaker set there was no knob. There was a push switch, which took me a few minutes to figure out. It may be no big thing to those of you who are adept at reading between the lines when it comes to instructions and diagrams, but I am not one of those. I like things to be as they say or show they are. This knob/push switch difference could have been due to an improvement made to the unit after the diagram had been published. Or it could have been the flip of that scenario. Either way, it should be fixed. I, for one, would vote for the knob, as shown in the diagram.

Before we get too far along in this review here are a list of iN Studio 5.0 features as listed in the manual.

REAR PANEL FEATURES
7. Input Mode: iPod, Aux1, Aux2 mode select button (knob?)
8. USB: To sync iPod with computer
9. S-Video: A standard four-pin S-Video cable connector
10. Aux1 Input: Used to connect signals from unbalance, -10dBv devices. White, left input. Red, right input
11. Aux2 Input: For maximum flexibility a stereo Aux In input is included which allows you to plug in a secondary audio source (ie: a portable music player)
12. Volume Control: To set up the output sound pressure from the iN Studio 5.0 system to proper levels as required
13. Vent Port: Aids in reproduction of very low frequencies by discharging frequencies below 50Hz
14. 1/4″ TS Output: Use 3 meter speaker cable included with the set to connect the left and right speakers via the 1/4″ TS jacks on the back of each speaker
15. Power Switch: Turns device off and on, On indicated by a white (blue on my set) dot
16. Power Receptacle with Fuse Holder: Hold external main fuse. Accepts a detachable 3-circuit line cord to power the unit
17. Voltage-Select Switch: Provides two selections, 115 VAC and 230 VAC. Should be set to match the “House Supply” voltage of the country in which the unit is being used. 115V for USA. 230V for most of UK and Europe
18. Aux AC Output: Power outlet for Airport Express
19. Auto On/Off: Set on Auto, the system will shut off when a signal has NOT been received in 15 minutes. The system will power up automatically when the signal is received.

I don’t know why I thought I could connect my MacBook to the speakers via a USB chord (provided) but it isn’t done that way. Duh. Nope. It’s the mini Y cableâ€”male mini plug from the headphone input on the MacBook which Y’s out to two hooded phone jacks, red and white, which go into the color coded inputs in the back of the control speaker. It took me just a minute to figure that one out.

The instruction sheet is lax in showing how to connect other devices to the speakers. This may be a no-brainer for some. But for others it could mean frustration and bad vibes towards a notably good company. After the proper connections were made I used the push switch to select the input mode. I had to guess at a few positions before iTunes would play. Again, a knob would be so much better in that one could designate the position/equipment being selected at the time. With the push switch it’s strictly blind and by sound only. The provided remote can also be used to access input modes. As stated in the instructions, the USB cable is provided to sync the iPod with the computer. Another Duh. That’s a nice feature. 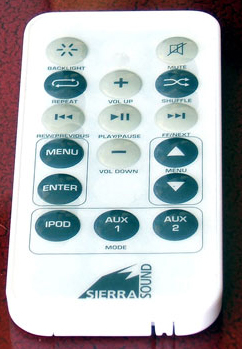 Sierra Sound provides a remote with this set which controls the iPod and Auxiliaries 1 and 2. Volume, pause, menu, shuffle, repeat, and backlight may be accessed. I used it from across my living room, about 20 feet, and it worked fine. Of course, at twenty feet, unless you have the eyes of an eagle, you can’t really read the menu on your iPod which will be in the speaker dock on top of the control speaker.

I thought I’d A/B the MacBook and iPod to hear differences in quality and volume. Not surprisingly the quality was about the same. They are both digital files, after all. I know there are differences between digital files but in this case my iPod was loaded directly off my MacBook. The big difference surprised me. The volume on the iPod far surpassed the volume of the MacBook. I cranked the computer all the way in volume and left the equalization flat. It was loud. clear, and filled the room with enough sound for anything short of a plumber’s Christmas party at the VFW. When I played the iPod I couldn’t crank it all the way without fear of blowing the speakers. It was so much notably louder. However, these are self powered and tuned speakers so they should not “blow” even when maxed out. Speaker Frequency Response: 55Hz-22KHz, Crossover Frequency: 3.0 KHz. If you do plug in a stereo receiver, and crank it all the way, and the speakers up all the way, you will probably get a whole lot of distortion, but I doubt the speakers would blow. Hey, try it out. But don’t expect Sierra Sound to be sympathetic to your stupidity.

MyMac.com is impressed. They make iPod sound great. The volume has got to be up a bit before the presence of mids and highs become apparent. Sierra Sound suggests turning the volume of the speakers up all the way, and then use the volume control on the iPod to regulate the output volume. Playing the iPod at lower levels, these speakers don’t quite reach their sonic potential. The highs and high-mids take a back seat to the 5″ woofer. The baffles do have bass ports in the back of the cabinets tuned to create more bass response out of the diminutive 5″ speakers. But at lower volumes this feature sort of takes over. It’s not until the volume is raised to a point where it is obvious the high-mids and highs are beginning to live.

I’d say about half way up the volume scale is where all of the frequencies become available. And at that point the speakers really sound good. They’re not too loud, but they’re up enough to hear the music from even the next room. And, as I said before, with the iPod there’s plenty of headroom here so you can really get things jangling if you want that. I finally did crank these things all the way with my iPod playing “The Weight” by The Band. LOUD AND CLEAR! Man, these things can really put out.

Please don’t mistake these speakers for ones that are built to fill the whole house. They can get plenty loud, but at the top volume they get a little shrill. At that point the 5″ woofer can’t keep up with the volume of the 1″ tweeterâ€”the mix becomes a little bright and mid-rangey. But even maxed out the woofer does not flag. There’s almost no noticeable distortion. These impressive speakers stay clear all the way up the scale. That’s good engineering, folks.

Another versatile feature of the iN Studio 5.0 set is the ability to view your video files on your TV via the S-Video Output. Just hook it up with the cable provided and check out your vacation photos on your 52″ wide screen. What could be better than that?

Summary: For the size and convenience of these speakers, and the associated cost, along with, for the most part, excellent sound quality, I think they’re worth every penny. No, they’re not cheap. But neither is the sound. And to be able to play my iPod with this much clarity and volume speaks, well, volumes. This set should last the listener years, and provide quality sound from any device played through them. But the real kicker is to be able to play/charge your iPod in a way that rivals much larger and more expensive systems, and at the same time have the wireless feature of Airport Express and iTunes at your fingertips.

If you’re looking for speakers to play your iPod through, just enough so you can hear the music in a room, maybe another less costly system will do for you. But if you want quality, flexibility, and something that sounds really good, and is built like a tank while looking beautiful, look no further. Sierra Sound’s iN Studio 5.0 won’t disappoint, as long as you understand what it is, and what it is not.