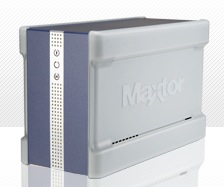 Nowadays, people have more networked computers in their homes and small offices, so the need for backing up all their files has become far more important. Add in the increasing file size of photographs and video files, and you’ll want a “network attached storage” device. NAS is the acronym of choice for these gadgets.

NAS devices are hard drives that can be accessed over a Local Area Network (LAN), to eliminate the problem of having to move hard drives from one computer to another, or to have a separate hard drive dedicated to backup for each computer. The NAS can have accounts for individual users, or the files can be open to all.

The unit is solidly constructed; it more resembles an aluminum ingot than a network storage device. This case will be able to take any and all abuse you can possibly dish out. Fellow reviewer John Nemo will chime in with his own comments below.

For network connectivity, $499 dollars gets you:

Once unpacked and cabled up, we ran the Maxtor EasyManage software from the installer CD. It installs the software itself, as well as a kernel extension that allows you to have the host computer wake from either sleep or shutdown to run unattended backups. A restart is required to take advantage of the wakeup features.

Setup involves creating either private or public accounts. Public accounts allow access to anyone, and private accounts are user specific. I used a public account for testing, as this is how many SOHO users would configure the drive.

Once you have setup your accounts, public or private, you can configure EasyManage with your backup choices. You can choose which drives or folder to backup and how often. One nice EasyManage feature is the ability to keep up to ten earlier versions of files, to establish a version history.

Advanced options include waking the Mac from sleep, and starting from a shutdown state. You can choose to have the Mac shutdown after the backup is completed.

Once you’ve waded through EasyManage’s confusing interface, and have configured your backup, you’re ready to have the SSII get to work.

Here’s where the SSII proves to be Mac-unfriendly.

One of the nice things about the Mac is its ability to have long, descriptive filenames. The only character that’s not allowed under OS X is a colon (:).

So, EasyManage will be merrily copying files, then will rudely interrupt you with an error dialog box saying “the file was not copied – there may be an invalid character” (that is, /\|:*?<>) in the file or folder name.

You have the option of skipping this file or folder, or skipping ALL files/folders with these characters.

The other problematic error message is: Bad Filename: This may be because the destination disk doesn’t allow names longer than 31 characters.

Again, you can skip the offending file/folder, or skip them all.

In my first full backup, I had well over a hundred files that could not be copied. If I elected to “Skip all” I would have no idea of which files were not copied. If I watched the backup to note individual files with illegal filenames, I’d be watching for hours.

As a Macintosh user, this limitation is unacceptable. I realize it’s a fundamental part of CIFS, but I’m not willing to use tools like “A Better Finder Rename” to change my filenames to make them Windows-compatible. I LIKE my Mac filenames, and don’t want to change them.

I did create a workaround, however. I created a disk image on my network volume with a Windows friendly filename. Next, I mounted the disk image, and copied all my files into the disk image. I used both the Finder, as well as Synchronize Pro. Using a Macintosh disk image avoids any problems with illegal characters, but it also prevents you from using the automated backup capabilities of EasyManage. I did it to see if it would work; it’s not practicable on a day-to-day basis.

The other deal breaker for me was slow copying speed. While the SSII has Gigabit Ethernet, the overhead associated with CIFS takes a terrible toll on copy performance. I can copy files between my Mac Pro and MacBook Pro at speeds averaging 25 MB/sec for large files. The SSII never managed more than 15, and usually transferred the same large files at about 10 MB/sec. Small files always copy more slowly, even in the Mac world, but the SSII copy speed was far slower than my Mac Pro to MacBook Pro copy speed.

It’s too bad that the SSII has the CIFS filename limitations, and slow read/write speeds, as it has plenty of good features.

I used the shared media feature to run both my iPhoto library and iTunes library from the SSII. I was able to stream music to my SliMP3 (http://www.slimdevices.com) with no trouble, and sharing the iPhoto library to both wired and wireless Macs went with nary a snag.

I tested, albeit briefly, the wakeup and shutdown features for automated backup, and all worked flawlessly.

Seagate Maxtor provided a second non-working SSII drive to MyMac.com, giving me permission to take it apart and examine its internal organs. Not being an engineer or supergeek, I used a small screwdriver to remove screws and a large screwdriver to pry the case open. Do NOT try this at home or office. It will void your warranty and ruin your expensive unit.

After fifteen minutes, the components were divided into uneven piles, for: the metal casing, lightweight, stylish, and strong; blue rubber gaskets that held everything very snugly in place; the aforementioned screws; a small but impressive circuit board, power supply, and fan; a bunch of miscellaneous wires, tape, and assorted thingamabobs; and two beautiful 500GB high speed SATA drives.

I was impressed with how well everything had fit together, sleek and strong, and how much inherent hardware value the company provided for $500. David and I have had similar mixed results with Maxtor’s software in the past, and we urge them to develop more Mac-friendly utilites in the future.

Conclusion:
The Seagate Shared Storage II is a splendid unit for PC users, but it is not well suited for day-to-day Macintosh usage. The CIFS limits on filenames prevent many Mac files from being copied to the shared drive. Copy speed is far slower than Gigabit copies from Macintosh to Macintosh. The EasyManage software, while fully featured, is somewhat confusing. The Shared Storage II does work well as a shared media server, assuming all the medeveia filenames are CIFS-compatible.