Itâ€™s not that Iâ€™m slow to update things; it just happens that where I live outside Washington, D.C. things just take a bit longer to arrive. It was only in 2004 that Comcast Internet access arrived in my neighborhood, and I was one of the first to sign up. I just couldnâ€™t take dialup anymore.

Now Comcast Internet was good at first but overall, Comcast service for TV and their customer service (I was a customer since 1990) just was the absolute worst. No matter what the problem, I had to be there to â€œlet the technicianâ€ into the house. It didnâ€™t matter if I told them that the curb side pylon had been run over by a garbage truck, I needed to be home. (and no, I would not let the tech into the house if the problem was outside) The worst part was that the quality of the TV never improved despite numerous service techs over the years and despite some techs truly intense efforts to improve the quality of the product. What really started to irk me was when I began to experience Internet outages and the response from the tech people on the phone was always that the cable modem or the router (mine, not theirs) had failed and I would need to go to the store and purchase a new oneâ€¦ or sign up and have theirs installed and pay a monthly fee. Well, I guess you know that didnâ€™t happen. What usually occurred was that the problem was up the street on the main roadway and one of their techs was already working on the issue but I should run to the store and buy some new equipment.

So when Verizon contractor crews showed up last year and began digging up the front yards in the neighborhood to lay the fiber optic cables and put in the junction boxes, I was really interested in finding out what the story was about the system. Of course, it wouldnâ€™t be ready until who knew when, just check your mail as the company will send out notices when the system is up and running. So I waitedâ€¦ and waitedâ€¦ and waited. Finally in the final couple of months of 2006 the notices began to arrive but I wasnâ€™t available to do anything about it due a commitment that took me out of the area for 2 1/2 months.

Fast-forward to January 07 and I decided enough was enough, time to really consider FIOS, including the TV service. I did my research, checked to make sure that there were no outstanding issues between FIOS and Macs. While there may have been some issues at the very start of the program, there were no problems that I could find. The main issue that I found was that ALL of the perks of the package deal are geared to the PC user, with nothing of benefit to the Mac user other than the speed gains. Now in testing out the differences in speed, I began to run speed tests on Comcast through several sites online to test both the download and upload speed of the system. Some of the Comcast results are below:

Now what I was showing as a download speed wasnâ€™t that bad, but I wanted better. I decided to go for the 15Mbps/2Mbps package that Verizon was offering for $49.99 a month. I was presently paying Comcast $42 a month for the 5Mbps speed. So having decided to go for the Internet package, I also went for the TV package, giving me DirectTV, replacing Comcastâ€™s package. I compared what both companies offered, found Verizonâ€™s to be better and also less expensive and made the decision. I contacted Verizon and made arrangement to have FIOS installed at the end of the next week when I could be there. The one thing that I did make perfectly clear to the representative is that I have Macs, not PCs, and that I would not need any of the special add-on services or software. I received a confirmation email and a notice on my front door that the contractor would be there 24-48 hours prior to the install to run the fiber line from the curb up to the house. During the time period of waiting for the FIOS install, I continued to run speed tests and all returned showing basically the same speeds as shown above.

The day before the scheduled install, the contractor showed up to do the fiber run to the house. Miss Utility, the free utility detection service in the area of DC, had come within days of my order and marked all utility lines along the curb line and the runs up to my house. The contractor made the run from the curb up to the house, apparently using a very large earth moving machine because that could have been the only answer to the burrows, bumps, ridges and mounds that I found when I got home from work. 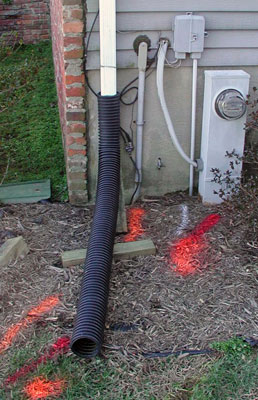 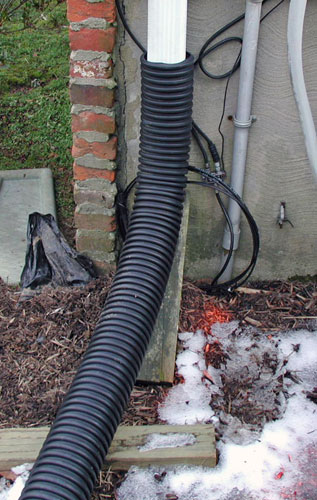 Except for the burrows, they did a very good job of running the fiber right up to the house to where it would connect into the basement area. Now one of the items that Verizon is proud of saying, both verbally when you speak with them on the phone and in emails, is that the install time is between 8 am and 5 p.m., but that the install tech would contact me either the day before or the morning of the install to let me know when he (and it usually is two techs to do the preliminary install work) would be there. Well, I didnâ€™t hear from the tech the day before the install so I called Verizon and was told the tech would call early in the morning to let me know. Surprise!!! 8 am and I see two Verizon vans pull up to the front of the houseâ€¦ no phone call. Good thing I had planned for something like this and had been up for quite a while enjoying my coffee. I went out to meet up with them, spoke for a few minutes and then watched as they began to gather their tools and equipment together and come up to the house.

The external mounting of the ONT (Optical Network Terminal) took place relatively quick, and was mounted adjacent to where the existing telephone access box was mounted on the outside of the house. The unit connects the fiber back to the central office and has connectors for CAT 5, Cable, telephone lines and the TV access point. 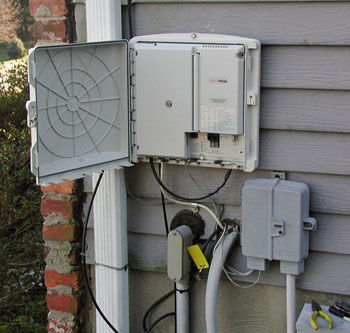 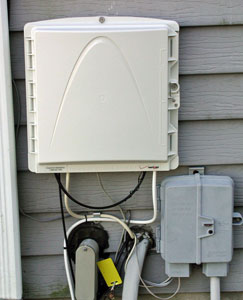 While the lead tech was working outside, the second tech was down in my basement, working on installing the emergency battery backup power unit. This unit is installed in case of a power failure, permitting continued telephone use, as long as it is a unit that does not require power to run, as most hand-held units do. The best part of the work done by these two techs was that they made use of the existing point of power line entry into the basement area and did not have to drill any more holes into the exterior wall. The install of the unit was quick and the tech soon had it plugged into the power outlet in the small closet where the main circuit breakers are located. 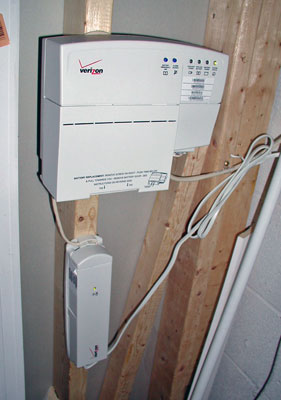 The only problem that was encountered during the install phase outside was that when the two techs went to verify the connection in the vault, they couldnâ€™t open it as it had frozen shut due to a light coating of snow. They spent about 15 minutes working in the bitter cold before they finally succeeded in prying it open. They also discovered that the contractor running the fiber line had not plugged the line into the connector unit in the vault on my property but had done so in the vault across the street. No problem to the techs, it was just a change of plug assignments at the main switching unit. They took care of that in a few minutes.

With the install of the fiber outside, connected to the ONT, and the emergency power battery backup unit, the second tech moved on to the next install job. The primary tech remained to activate the service. I brought him up to the den on the second floor that I use as a computer room and showed him the set up. What had also occurred outside was that the point where the Comcast cable came up to the house and then connected to a splitter is the same point that the fiber was connected to run the service into my house. CAT 5 or coax, Verizon uses both in the house. Since I already had the cable running into the den, plus the wall jack, all that remained was for the tech to install the new router. With Comcast, I used both a LINKSYS cable modem and a router that I had purchased myself. With Verizon, I went along with one of their routers, â€œfree routerâ€ that is. The router. an Actiontec, is longer than the LINKSYS units but when installed vertically, takes up a lot less space. 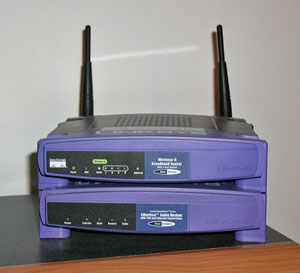 So the first thing I asked the tech was, â€œDid they tell you I have Macs only?â€ No was the answer, it wasnâ€™t marked anywhere on the order. I told the tech, not a problem, first thing is I will not install any of the software that you normally install on a PC, it wonâ€™t work on a Mac. So we connected up the router, turned it on and I accessed it through my Safari web browser. Following the techs instructions, I had it set up in just a couple of minutes. I restarted my G4 and viola, internet access. The tech was a bit surprised that I didnâ€™t have to fiddle with any thing else, that I was already online and functioning. We verified that the system was up, running and then he handled the hookup of the DVR for the TV. Again, he checked to make sure it was working properly and having cleaned up all the odds and ends, he left.

Yes, the first thing I did after playing around for a few minutes to see how quickly web pages loaded (FAST!!) was to start running some speed tests. As you can see below, Iâ€™m now cooking here. I am really enjoying the speed, what a pleasure to surf the web now. Downloads are blazing fast, uploads arenâ€™t shabby either.

All in all, Iâ€™m extremely pleased with Verizonâ€™s service, both internet and TV. When Iâ€™ve had a question, I just call the toll free number and a tech (available 24 hours a day, 7 days a week) has been there to answer it. Iâ€™ve not experienced any major problems or hiccups.

I had also done my homework before making my decision to go with Verizon FIOS. I read everything I could about FIOS; product related, installation problems and any issues with Macs. When I contacted Verizon, I had two sheets of questions written out about the internet service and the TV service. What costs were there, what hidden costs didnâ€™t I know about, cost for the DVR unit, capability of the unit, battery backup systems and anything else I could think of asking them. I wrote down the contact names, the dates and times, and all responses. If something pops up, I have it in a folder readily available to go back and ask questions.

If Verizon has been in your neighborhood, laying fiber underground (or above ground in some parts of the country) you might want to consider checking it out, particularly if your present ISP provider really isnâ€™t providing you with good service or quality service. So far, I love it.