This is what happens when you procrastinate on a Mac article: the whole world changes before your eyes! 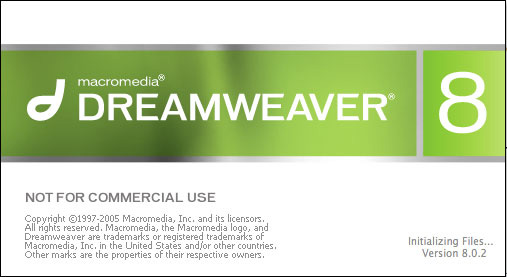 When I first got my review copy of Dreamweaver 8, it was fresh off the presses from Macromedia. I was happy to get it, and then it wasn’t Macromedia’s any more. Hearing that Adobe had taken over, I felt positively parental: “Be nice to my baby!” My younger brother may not have had the same reaction, though. Last October when I complained to him about Dreamweaver’s default action of asking for “alt” tags when inserting an image, he replied:

Yes, you do appear to be in a foul mood. Maybe it’s from using Dreamweaver. I gave up on that piece of s____ after the bootleg Dreamweaver MX I got somewhere turned out to be so buggy. Some of the mistakes it makes in coding tables and images is unforgivable. I’d design a page and spend 5 times as much time fixing table cells that weren’t the right size.

Ouch! He’s right about the squirmy table cell widths (not covered here), but overall, my impression of the previous MX version was better than that. There is at least one nasty bug in Dreamweaver 8 that I’ll talk about later, however, so read on.

I use Dreamweaver to manage over a dozen Web sites. Version 8 was a stronger, cleaner improvement over its predecessor, no question about it. The new integrated file browser was the most obvious change and saved valuable screen real estate. Now, I’m not what you’d call a power user or a Dreamweaver freak; the only times I ever visited the support site or registered for forums were for answers to something specific, like a DHTML question I shouldn’t have been asking in the first place. But I’ve always liked the app for the way using it inherently organizes everything: if I want to edit a specific site file, I can either navigate through the Finder or open up Dreamweaver, which would have to launch anyway after double-clicking on the file. And I really enjoy the FTP component: for those who don’t know, whenever you connect to your FTP server, Dreamweaver generates a temporary file that maps all your directories. To send an image to a nested folder way down deep, just highlight it and click on the “Put” arrow. Dreamweaver figures out where it goes and sees that it gets there. (Contrast that to something like Transmit, which I unstintingly love, but which allows you to put any old file, any old place â€” a godsend for geeks, obviously, assuming they’re careful.)

The old MX version did that too. But Dreamweaver 8 was faster on my ancient 500 MHz TiBook, not quite so much faster on my even more dated 400 MHz B&W G3 (both with 768 MB of RAM), and now the fastest of all on my 1.87 GHz Core Duo MacBook (2 GB of RAM.) Almost acceptably fast, in fact. It’s running under emulation, but overall seems much faster than on the older models. The MacBook is running Tiger, while the older machines are all using OS X 10.3.9. However, we did just let the cat out of the bag: on older Macs like those two of mine, Dreamweaver 8 can be aggravatingly slow at times. 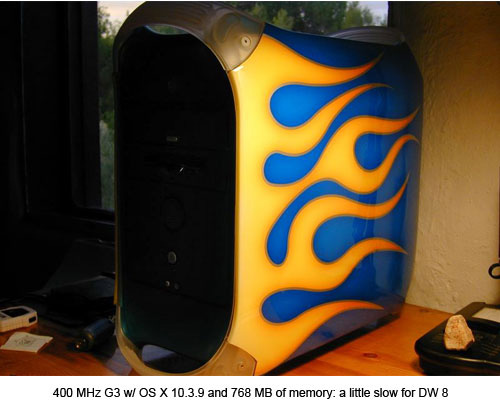 On the machine I call the “Big Guy,” the venerable but bulletproof B&W G3, with OS X 10.3.9 running on a fast hard drive and 768 MB of memory, just selecting and applying “bold” to a single letter can take long seconds you don’t expect to waste. But the worst thing is that after the change takes effect, the document jumps like you jabbed it with a poker, and you have to scroll back to wherever you were. I would call that the single most irritating issue with Dreamweaver on an older system like this one. If you’re working with a long page and have hypertension issues, this can be fatal. The Spontaneous Auto-Scroll event takes place less frequently on the TiBook and never on the MacBook. Go figure â€” obviously a matter of how quickly the application accesses memory and how efficiently that’s used. If you’re like a lot of Mac users, you probably have at least one older computer in your stable and may have a chance to pick up an inexpensive copy of this software after CS3 comes out. That’s fine, just be informed.

I had build a fairly extensive online store for a client and done it all by hand. No shopping cart software, just the longest layout outside of ’96-vintage Windows sites â€” you know, the center-justified ones with multi-colored text on a gray background â€” with lots of pictures, javascript, and a different PayPal button for each item. Go ahead, laugh. But the pages were a work of art, and once you start down that long, dark road, you’re committed. Besides, the client loved it.

When it came time to add a new category and re-organize the store. I thought it would be easy. All I had to do was copy and paste the long tables onto different pages, and that’s exactly what I did. When I tested the new page in Safari, though, every button was broken! Every single one â€” I was beginning to think my brother was right. For whatever reason, Dreamweaver had inserted random numerical characters into almost every line of code that makes up the PayPal button. [See below] The new page looked perfect, except that it was useless for online ordering. To keep from having to build the page all over again, I painstakingly went through the entire document in code view, deleting all the extra characters in each block of form code. It took forever and required great discipline. Later I discovered another way to approach this: although copying and pasting even a single button form in layout view invariably produced a broken button, I could paste in the code itself in code view, and that stayed whole.

After I pasted in a table full of PayPal buttons, I had to go down the page, select and delete each button in turn, then switch to code view and paste in a sample of button code from the clipboard, and finally, edit the name and price of the item within the code itself (you can also do that in layout view). Crazy-making, yes, and only arising in this lunatic example of a hand-built Web store, but a definite bug, regardless. If you copy and paste any kind of Web form between Dreamweaver 8 documents, be aware that you may have to go back in and fix things. Just have a look at the following: 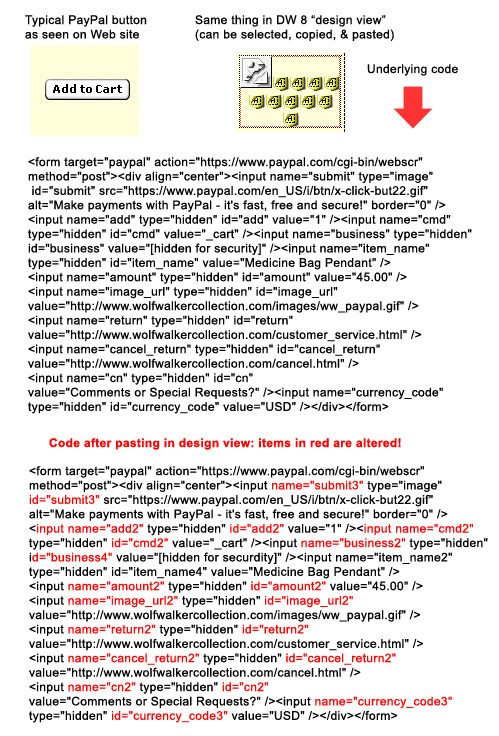 So where does this leave us? An exhaustive review of Dreamweaver 8 at this late stage would be silly: within a short time, Adobe will release Creative Suite 3 (CS3), and Dreamweaver 9 or CS3 will be a part of it. (While you’re waiting, take a look at a related feature, Adobe’s new CSS Advisor.) If there’s any justice in this world, the CS3 version won’t build table cells of jello or mangle pasted form code. That alone would be reason to wait for it, but you know there will be a great many more changes. A different splash screen, for one thing:

Hey, where did THAT come from? Heh â€” I googled “Dreamweaver CS3 beta” and found a Chinese version. That must mean the real thing is coming soon. As the translated page so eloquently states, “Said Adobe Dreamweaver 9 (CS3) Alpha 1 will be released after a two-week test Beta, when you can eat a download.”

Good enough for me. As for Dreamweaver 8, soon to fade into obsolescence, I give it a MyMac rating of 3.5. I couldn’t live without it, but it shakes the code enough to make me worry sometimes. We shouldn’t have to put up with that on our nice new Intel Macs, and maybe we won’t with CS3.

(The new universal version should be lots faster, too. I can hardly wait!)