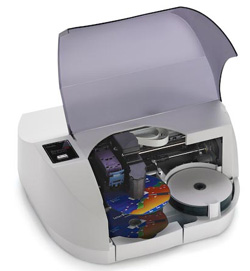 Convergence – it is one of the buzzwords in computing at the moment. It is the joining of disparate technologies in a single device – for example, a cellphone and an MP3 player. Done well, and you are the darling of the industry, (such as the iPhone), and done badly it will be a failure – Motorola’s ROKR comes to mind.

Primera Technology sent me a different and intriguing example of the same convergence concept – their Bravo SE Disc Publisher. What they have done is integrate a DVD writer, inkjet printer and a nifty robot arm to create a unit to automate the production of professional quality DVD or CD discs.

The unit is the size of a large inkjet photo printer. A large smoked plastic lid opens to reveal a hopper that can take 20 blank discs, and a mechanism to lift these discs to a conventional computer disc writer drive (the review unit supported DVD+R and DVD-R at 16x speed, and CD at 40x), with an inkjet printer head mounted above it. The robot mechanism uses a precision pick-and-place arm, and completed discs are dropped in to an output tray that can be pulled out separately while the unit is running.

Installation is simple, as the device is USB connected, and comes supplied with the appropriate cables. The included CD installs an appropriate printer driver for the disc printer, and a customized copy of Discribe Robotic Edition for driving the disc writer and the robot arm. There are also some Encapsulated Postscript templates for creating disc labels, though on my system these were not copied to my drive as part of the installation.

Discribe is not a Universal Binary application, though it ran perfectly well on my MacBook. It is actually quite powerful, though the interface is a dizzying reminder of how OS 9 applications used to look. As such, it is not terribly accessible, though it can write virtually any type of CD or DVD. What it can’t do is encode video or audio to the correct format, so you will need to use another application to prepare your content.

Discribe is also used to print to your discs. Again, it has no creation capability – you import PDF or TIFF images for printing on to your discs, so you have to have created those images in Photoshop or another application. Disappointingly, the Windows version of the package does include a full labeling package.

I used iMovie and iPhoto to create some photo slideshows and movies from a family event I attended in Israel last year, and then used Roxio Toast Titanium to generate a DVD disc image that I wanted to burn and distribute to my wife’s extended family. I had a go at creating a disc label using the EPS template in Photoshop Elements, but I have no skills in graphic design and my effort looked horrible! Fortunately, Roxio Toast includes Disc Cover RE, that can import iPhoto images and has a wide array of colorful and professional looking disc label templates – and it has a Primera Bravo printer profile as well. I was able to create a beautiful disc label using photos of the family, and export it as a TIFF file. Setting up Discribe to burn 10 copies of the disc image and print the label on each one took only a couple of minutes. I put 10 printable DVD disc in to the hopper and clicked the burn button.

Watching the Bravo SE in action is actually quite fascinating! The robot arm drops a disc in to the opened drive tray, and the 16x drive makes short work of burning it. Then the disk is extracted and deposited on the printer tray, which pulls it out of the way and starts printing – the arm then goes and puts another disk in the drive. While that is burning the printer completes the first disk and drops it in to the output tray. This cycle repeats for up to 20 discs.

The end result is a seamless, completely automated disk production process. My test disk was only around 20% of a full DVD, but even so the Bravo SE burnt and printed my 10 disks in around 25 minutes. The disks all played back flawlessly in my home DVD player, and the printing quality of the label to me looked very good indeed, with no banding or dithering visible.

Now, the sharp-eyed will have noticed that this convenience and quality comes at a price. At $1495 (or $1250 for a refurbished unit), there is a good chance that if you buy one of these it will be worth more than the Mac driving it! However, you do have to balance the headline cost against the savings of time that it will deliver if you regularly have to produce multiple copies of labeled discs. It should also be borne in mind that in the past, disc duplication technology has not been available to end users at any cost, and the Bravo SE should be viewed as a breakthrough product.

Consider my test disc run of 10 DVDs. If I had to produce them using my Mac and my HP printer, I reckon it would have taken me around an hour to burn the discs back to back using Toast – because I would not have wanted to just sit in front of my Mac swapping discs when required. The same applies for the disc labeling, assuming that I was printing directly on to the discs rather than using transfer labels. So, the 25-minute turnaround of the Bravo SE would have been at absolute best two hours. Time is money, and on that scale I do not believe it would be long before the device covered its costs, provided you do need to use it regularly. As it is completely automated, even if you need full DVDs, an overnight run can be safely left for completion. You could use an external print shop to provide the same service, but you would lack the direct control and variation that the Bravo SE can give you.

In terms of consumables, $37.95 buys you a new ink cartridge for the Bravo SE, and given the low coverage that a DVD or CD disk requires you shouldn’t be replacing it that often. Primera also offer specialized CD and DVD disks that have waterproof coatings for true label fastness. I used a generic printable DVD disc spindle that cost little more than a conventional name brand, and was perfectly comfortable with the results.

You can probably tell that I really liked this device. However, in considering the review score I must point out that it is disappointing that for such a premium device additional non-supplied software is required to get the best from it. Primera indicated to me that negotiations with a previous supplier of labeling software broke down, and that their surveys determined that 90% of their Mac customer base already had Photoshop or Illustrator suitable for use with their templates. However, having this software does not necessarily mean you can generate quality results quickly with it, and I believe Primera might broaden their appeal and their value offering if they found a way of including this functionality with this product.

Accordingly, I award the Primera Bravo SE Disc Publisher a score of 3.5 out of 5.