A Better Finder Tool Suite is a set of Finder add-ons that perform bulk renaming, attribute editing, and file finding tasks. A Better Finder Rename and A Better Finder Attributes are launched through contextual menu items and thereby applied to batches of files, making changes to files that are either slow or impossible to make in the Finder. Via a keyboard shortcut, A Better Finder Launcher gives the user shortcuts to files and applications. Since each is also available as a standalone product, this review will look at each of them separately before balancing up the entire set in terms of value and usefulness. 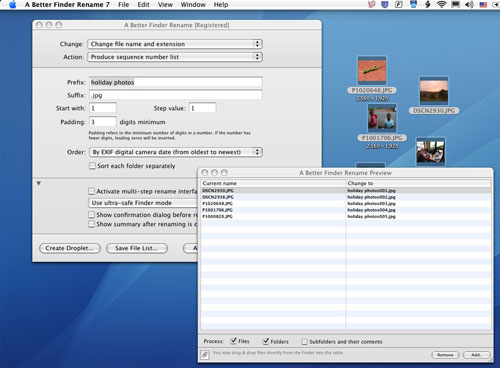 Many applications will process or create groups of files quite happily. But if you need to rename them afterwards, the Finder itself will only let you do that one file at a time. A Better Finder Rename (here shortened to ABFR to keep things simple) is essentially a one-trick pony — it renames groups of files simultaneously — but it does that trick very well and in a multitude of different ways.

The easiest way to use ABFR is via a contextual menu item that appears when a group of files are chosen in the Finder. The application’s interface consists of two windows, one presenting the various renaming options, and the other giving a “before and after” listing of the files about to be renamed. Pull-down menus and editable text fields give the user quick access to most of the main functions. Users are not limited to just one renaming task, so a batch of files could be converted from lower to uppercase, then given a .JPG suffix, and finally truncated to the DOS-friendly 8+3 character format, all in one fell swoop. About the only real flaw in the interface is the small text size used in the preview window: on Macs with small screens or running at a high screen resolution, like a MacBook Pro, it’s difficult to read the file names.

ABFR is able to read the EXIF data in digital photos and use that to give them names based on creation date. Likewise, artist and album information can be extracted from MP3 music files and turned into their file names. Frequently performed functions are best saved as Droplets, simple applications onto which files can be dragged and dropped as required. In short, anyone who needs to rename batches of files on a regular basis will find ABFR an essential and inexpensive timesaver. Few system add-ons are essential, but this is one of them. 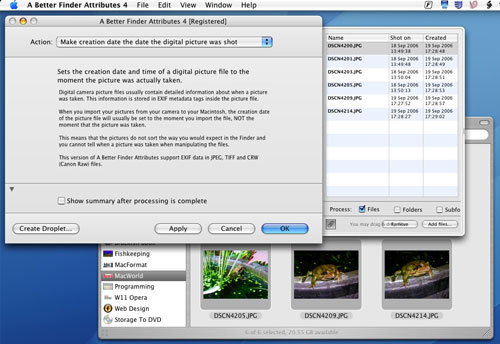 Digital photographers are often annoyed to find their Mac gives photographs a creation date based on when the file was imported and not when it was taken. The Finder doesn’t allow the user to edit creation and modification dates, but making these changes is quick and easy using A Better Finder Attributes 4.

ABFA is able to read the encoded EXIF data in photographs and change the creation date from when the file was imported to when the photograph was actually taken. The easiest way to do this with ABFA is simply to select the files in the Finder, and then launch the application via a contextual menu item. The main ABFA interface window includes text fields and pull-down menus for quick editing of file attribute data. A second window gives a “before and after” preview of the changes about to be applied to the files. One minor complaint is with the tiny text size used in the preview window, making it rather difficult to read this information on Macs with small screens (such as a Mac Book Pro).

Besides being a contextual menu item, ABFA can also be launched as a regular application or through a keyboard shortcut. Folders and files can be dragged onto the preview window, and individual items and subfolders removed as required. This is a good way to handle large batches of files, because OS X tends to slow down when contextual menu items are applied to large (50+) groups of files. Commonly used changes can be saved as mini-applications known as Droplets onto which groups of files can be dragged for instant modification.

While there are a variety of attribute change options available, most are concerned with creation and modification dates. The two additional tricks are toggling the visibility of file extensions and changing whether or not a file is locked. Notably missing from the roster of tricks is toggling visibility on and off. Beyond that, ABFA is a useful little program for photographers, webmasters, developers, and anyone else that needs to edit file attributes beyond what the Finder will allow.

Though a relatively expensive one-trick pony of interest to only a very select group of Mac users, if editing file attributes is important to you, then you will find that A Better Finder Attributes does its job quickly and easily. The interface is well thought out, and the ability to create standalone Droplets a real timesaver. 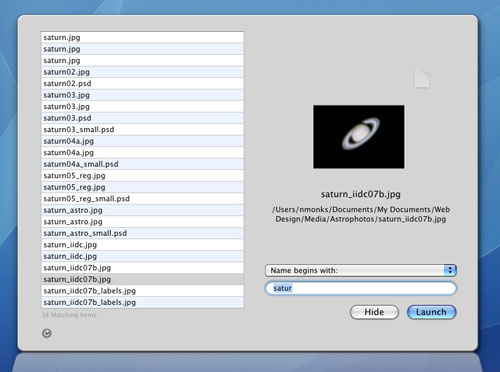 As hard drives become bigger, so finding files quickly becomes more difficult. Spotlight is of course one solution, but because it makes its searches in real time, it can be relatively slow. A Better Finder Launcher works in a different way. Because it searches an index of user-defined folders instead of the actual hard drive, it finds thing instantly.

The basic functionality couldn’t be simpler. A keyboard shortcut brings up the ABFL window. The user types in the search criteria, such as the first few characters of a document’s name. ABFL immediately returns a list of files beginning with those letters, and the user clicks on the one required, at which point ABFL quietly hides itself until called for again. Compared with fiddling with Spotlight, the overall process is quick and easy.

ABFL can isn’t limited to searching for files beginning with certain characters; the user can also search for characters within a file’s name as well as by “wildcard” characters. Of prime importance is how indexing is managed. ABFL can be configured to include or ignore files of a certain type, containing certain characters in their name, or located in certain subfolders within the folders being indexed. Indexing can be set to take place periodically, and obviously the more up-to-date the index, the more useful ABFL will be.

As good as ABFL is, it does have its flaws. Perhaps the most annoying is that files can only be launched; ABFL cannot be used to take you to the folder where that file resides. The interface is also decidedly non-standard. The results of a search are presented in a window without a standard scrollbar, so while there may be results below the ones immediately visible, there isn’t a visual cue making that plain. It isn’t clear what the difference is between two of the search options — “Name contains characters” and “Name contains word” — and the tooltips for all the search options are identical. While they sound the same, the do indeed return different results. Niggles aside, ABFL does what it promises to do, and does it well.

Application launchers and file finding utilities are far from uncommon in the Mac shareware world, but ABFL does hit a sweet spot in terms of speed, ease of use, stability, and price. For any Mac user who finds Spotlight too slow for their needs, ABFL is definitely worth a look.

Pros: Very fast and easy to use. Files and folders can be easily added or excluded from the index. Inexpensive.
Cons: Cannot be used to locate files, only launch them. Interface is non-standard and tooltips are limited in helpfulness.
Standalone price: $14.95
MyMac.com Rating (out of 5): 4

Summary
Buying the entire pack of utilities rather than just one or two of them will depend on how useful each individual utility actually is. As a three-pack you save seventeen dollars ($37.49 versus $54.85 for the three bought separately). But if you actually only need A Better Finder Launcher and either A Better Finder Rename or A Better Finder Attribute, then you’ll save a couple of bucks by just buying those two programs ($34.90). The question is do you really need more than one of them?

A Better Finder Rename is almost indispensable, and quickly pays for itself if you routinely have to rename batches of files. Anyone working in a creative or scientific field will quickly find A Better Finder Rename an essential tool. A Better Finder Attributes is truly useful for only a very specific market, and if you don’t routinely edit file attributes, then there’s no reason to buy this program. It won’t expand your computing or allow you to do any of your usual tasks more quickly or efficiently. A Better Finder Launcher has much broader appeal but is difficult to rate because you either like application and file launchers or you don’t. If you want a launcher, this one is priced well and delivers on its promises. In short, audition each utility independently before plumping for the three-pack instead of buying the one or two utilities you really need separately.