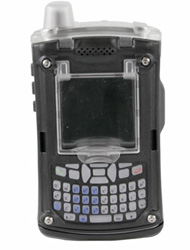 Do you take your iPod to places it should not really go? Have you dropped it in the dirt, got it wet, seen it covered in dust, sand or dirt, or do you constantly drop the thing and hope each time it will not break? Are you one of the millions who drop your electronics into the toilet each year? (Yes, it is true!) If you say yes to any of these things, then I have a product for you. For lack of a better definition, I will call it the Hummer SUV meets the iPod case, and when you see and use these, I think you will agree.

Otterbox has made a great number of rugged cases for a great number of different uses for a long time. Their goal is to protect your equipment, your iPods, your gear, and yes, even your cigars, from the harsh elements. Given that this is an Apple related site, it would seem obvious to look at their iPod rugged cases. Unfortunately, one small problem for me is that I do not own an iPod, so it would be a bit difficult for me to test one. But fortunately for me, they do make one for my Treo 650, so that is what I am testing to get an idea of just how they perform.

So why should you care about such a product? Well, iPods and Treos, and soon iPhones (which I am sure these people will have a case for at some point) are taken everywhere we go. I see people taking them jogging, fishing, hiking, camping, and boating. I even have a friend that wears his iPod while water skiing as he claims he never falls down! But it will only take one fall to kill his iPod, unless Otterbox protects it. In most cases (no pun intended) these devices are dust proof, waterproof, dirt proof, sand proof, and to the most extent, drop proof as well. And while you canâ€™t use them scuba diving, as they are not (typically) designed to withstand such water depths, most of their cases will survive a small drop in the pond, a dunk in the toilet, or even a quick dip in the lake, and you device should stay dry and safe in its Otterbox.

I received the Otterbox #1920, the rugged case for the Treo. At first, I was a bit taken aback by its overwhelming size. It truly looks like a cross between a Hummer and something out of the Army surplus store. In mostly gray and black plastic, with clear plastic parts where you need to see in, or it needs to see out (camera) this thing looks like it is built like a tank, and it is actually.

Following the instructions, I carefully placed my Treo inside and replaced the firm fitting back with a snap of its latch. The phone fits VERY snuggly, in fact, a bit to snug, and if you are not careful, you can break off parts of your phone. Lucky for me, I read the instructions and was warned in advance to be careful, but how many people read instructions? A small warning sticker in the case would be great here. The design is actually quite amazing. Every function is accessible either through one of many opening ports around the device or through membrane plastic covers. There is a lettered membrane keyboard cover in front, and a pop-up plastic lid that reveals a soft, clear plastic protector for the touch screen. And that screen protector lets one easily use the touch screen yet protects it from scratches and dirt, and even moisture. It was a bit difficult touching items on the edge of the screen, but I suspect that will get easier over time as the plastic softens more through use. The front and side buttons also have a membrane plastic covers that allows easy use of the buttons, and there is a place on the side to hold the stylus so it is not stuck inside the case. Using the phone while in the case was easy for most things, but connecting a wired head set, or a charge and sync cable require the opening of a â€œportâ€ on the bottom. Changing the silent/ringer switch also requires opening the case. Of course, when open, dust, dirt and water can enter, so a wireless headset is the best answer while in use, and be sure to set the ringer the way you want it before you put it in the case.

For the Treo, since it is a phone, the case has small holes in it for the speaker and microphone, so it is not as waterproof as the iPod cases. So how to water test it? Obviously, I am not dropping it in the lake, but nature helped out. It was raining outside, so I put on my coat and went outside to make a phone call and play with my Treo in the rain. Using my phone in the rain was not a problem, nor was reading the calendar or email, and no water ever got inside, but I, on the other had, was soaked. While I am sure it will not survive a drop in the lake, the iPod versions do not have the same problem with holes and are much more waterproof. A bright red note on the included install instructions specifically state the Treo case is not intended for underwater use. As for use, these little holes allow phone conversations with no problem at all, but playing music or using the speaker phone function on the other hand were not so successful, as the very small holes block a great deal of sound.

How about a drop test? Not with my Treo, or so I thought. And no, I did not plan on trying that test because, well, it is MY Treo. Unfortunately, as I said, the case is a bit large, and stupid me, it popped out of the front pocket of my jeans as I was running up the stairs at my house. The Treo took about 12 stairs back down to the basement via a number of different twists, bounces, and wall hits, landing on the floor glowing brightly. OK, we have a drop test now. When I picked it up, I was very pleased to see it was just fine, there was no damage to the device or screen, and everything on the phone worked just great. I suspect if it were not in the case, it would have broken the screen, the antenna, or parts of the keyboard, so this case does protect well against drops. Oh yea, no damage to the case either.

So, just a few last tests to perform, covering it in dirt, dust and sand. This would be easy. Test 1, drop it in the dirt and kick more dirt over it. Test 2: Burry it in some sand, easily found at the local park. No problem on either of these. After several attempts to get my phone dirty, removing it from the case showed no dirt or sand at all. And a quick rinse with water cleaned the case as well. But dust, where was I going to get dust? I know, the vacuum! Ok, this was strange, but I opened the vacuum cleaner bag, dropped my phone on some paper, and dumped a good deal of dust on the phone. Again, nothing got inside, although some of the small holes did have a little dust in them. That was easily blown clean with a can of compressed air. Since you will not be using it inside a vacuum, it should protect against normal dust just fine.

If your need is to use your phone, or, one of the other dozens of devices Otterbox case designs for, like iPods, Blackberrys, or PCs in a harsh environment, then Otterbox has a solution for you. While I found this case to a bit large and bulky for everyday use, if I were to take my Treo skiing, hiking, camping, fishing, or anywhere in a hostile environment for electronics, this would be the case I would choose to protect my device.

MyMac rating: 4 out of 5 stars