Every once in a while you may notice that a song you know is in your iTunes library may have “disappeared”. It’s rare, but I’ve seen it both with unusually large iTunes libraries and when my Mac locked up last week while it was downloading songs from the iTunes Store. All 22 I purchased downloaded, but the lockup (I had to restart) kept 3 of them from being listed in my iTunes library. Or perhaps you downloaded some new MP3s off of an unsigned band’s web site and would like to add them to your iTunes library. Either way, here’s how you can re-link missing song files or add a new ones. For this to work best, “Keep iTunes Music folder organized” should be on (it is by default) in the General tab of the Advanced section of the iTunes preferences.

1. If you are adding new songs, move them into your iTunes library folder, which is by default at /Users/(your user name)/Music/iTunes/iTunes Music.

2. In iTunes, choose “Add to Library…” from the File menu. Navigate to the iTunes Music folder, click it once, then click the Choose button. Any missing songs will be re-linked & new songs will be added.

Hi, Tom!
I have a FireWire hard disk that I’d like to set up as a startup disk for both my Intel and PowerPC Macs. How can I do this?
Thanks,
John in Arizona 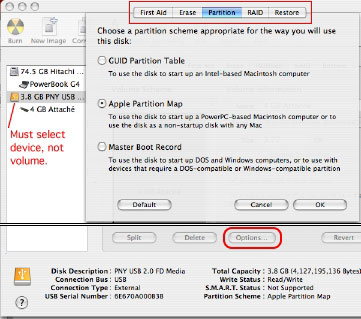 Hi John,
Unfortunately you can’t, although Mac OS X 10.5 Leopard could change this. Right now, it’s not possible to make a drive start both a PowerPC & an Intel based Mac. Drives formatted with the GUID Partition Table partition scheme are Intel bootable, and the Apple Partition Map PowerPC bootable. Both will mount on any Mac, but PowerPC Macs must be running Mac OS X 10.4.2 or higher to mount a GUID based drive. The setting to choose GUID Partition Table, Apple Partition Map, or Master Boot Record (to make a drive Windows bootable) is in the Partition tab in Disk Utility when you click on the “Options…” button. Disk Utility will default to the one appropriate for the processor it’s running on.

Diana,
I can’t give you a rock solid assessment without looking at it hands on, but most of the time a hard disk can’t cause no video. I’ve seen it, but it’s rare. It’s possible that the computer started okay for them, they were able to run tests, and found a problem with the hard drive which would mean you likely have two problems. I don’t have all the info I need to give you a good answer. As for “another part” being defective with the white G3 iBook logic boards besides the overheating video chip, that’s not true. That was either miscommunication or the non-technical person at Apple who you were likely talking to giving you bad information. Of course I can’t say which because I wasn’t part of the conversation.

Did you get anything in writing? I think your confusion comes from a couple things – assuming the same symptom is the same problem isn’t always true, a diagnosis can’t be made over the phone for a hardware issue, and you didn’t hear what you expected to when you took it to an Apple retail store. I might be able to give a better answer if I have more to go on, and I should be able to direct you to a better place to get help than the retail stores, which are not well suited to give service. In any case, another call to Apple customer relations is in order to register your continuing dissatisfaction.

Tom has been a service technician with First Tech Computer in Minneapolis, Minnesota, one of the most highly regarded Apple Specialist dealers in the US, since 1994. Previous to that, Tom was the systems manager & a graphic designer for a small marketing firm from 1990 to 1992, then worked in technical & product support with Mirror Technologies & Envisio for 2 years.

Send your questions to tom @ mymac.com. He will personally reply to each message when received and select letters will be included in the MyMac.com Help Desk column.