iPod cases can make your iPod look completely different, while the best cases still retain that special iPod flavor. iPod cases are all the rage. Sure, we all know that an iPod case will protect your $300 iPod from scratches and the like, but what about your $2,000 15″ MacBook Pro? How about a case for that?

The folks at Speck Products must have been thinking the same thing, and recently introduced the See Thru, a two-piece MacBook Pro case that is both attractive and effective in what it does.

There are two different flavors, the clear version, and the semi-transparent red. For this review, I am using the red version.

Installation is a snap. Literally. No tools are needed, just a quick snap-on. One piece snaps to the lid of the MacBook Pro, the other the bottom. The See Thru covers the sides of the MacBook Pro as well, so this is not just a cosmetic piece of plastic, but a full-fledged protective case.

A case is not worth anything if it cannot do its job of actually protecting the computer. I can say that after installing the See Thru, and using it for over 30 days, my MacBook Pro has not acquired one new scratch. Of course, the same cannot be said of the See Thru itself. The shinny plastic is not completely scratch resistant, but close. Not major blemishes are apparent, and while I have not actually tried to carve my initials into the case, I have used it as anyone would who has need of this sort of protection. In and out of my carry bag every day, going all over the place with me. So far? The See Thru looks great, holding up very well.

Apple understands brand identity, and how much it means to us Mac users. So they went and made the Apple logo on the lid of all its portables glow a nice, bright white. It just screams “I am a Mac user!” to everyone. It is both graphically pleasing, and iconic in nature. It makes a statement. So why on Earth would you have a Macbook Pro cover that would hide the glowing Apple logo? Fear not, as Speck Products Gets It. They do, and while the clear case is just that, clear, the red case is clear enough to allow the Apple logo to shine thru as well. It looks really nice in a darkened room, and makes your Mac stand out in a crowd. Not only is the light easily seen, but the See Thru actually accents the Apple logo with its styling.

The MacBook Pro is known for its many features, not the least of which is the number of ports on both sides of the computer. Every Mac user needs to plug in their MacBook Pro to recharge the battery via the MagSafe power adapter. We also need access to the audio jack, USB ports, Firewire ports, external monitor plug, locking port, and ExpressCard slot. Whew, that is a lot of ports! Thankfully, with only one exception, access to the ports is no problem with the See Thru attached. I have had no problems with the MagSafe cord plugging in, and when needed, disconnecting from the computer. While I don’t have any ExpressCard slot components to test with, access there is not a problem. I plugged a first generation iPod Shuffle in as well, with its close fitting USB plug, and it worked like a charm.

Heat
This was my biggest concern. From day one, my MacBook Pro has been the hottest computer I have ever owned. Until I downloaded smcFanControl (review here) I could only use this computer actually in my lap for about fifteen minutes at a time, at which point it simply got too hot. So how much worse wondered, would it get by wrapping it in plastic? The operating temperature of the MacBook Pro was not affected in the least with the See Thru installed. While not readily apparent from pictures online, the See Thru has a very nice set of heat dissipation slots on the bottom of the case, allowing the MacBook Pro to breathe just fine. 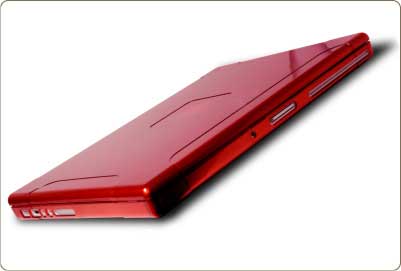 When my MacBook Pro is sitting on a normal desktop, the darn thing has a tendency to slide very easily. It was one of those problems that you don’t really think about, but with the See Thru installed, with its little rubber feet, it’s like it is glues to my wooden desktop! An unexpected bonus, fixing a problem I was only peripherally aware of.

While not perfect, the See Thru is a fine addition to anyone looking to protect their MacBook Pro. It is very attractive, and drew a lot of attention at the Apple Store during one of our Podcasts there. People kept coming up and asking about the case, a sure sign of a good product in anyones opinion!