Programming in REALbasic essentially consists of designing an interface and then applying snippets of code to the various interface elements such as buttons and menus. The incentive effect of seeing a standard Mac interface appear simply by dragging and dropping elements like buttons cannot be underestimated, and the relative ease with which the basic coding can be learned is just as significant. As a result, REALbasic is easily the most popular rapid application development tool on the Mac, and has been for many years, at least since the demise of HyperCard.

REALbasic is not without its critics though. It can be expensive: REALbasic 2006 Professional edition costs no less than $500, though it does include a slew of high end features and allow programs to be created for Macintosh, Windows, and Linux platforms. On the other hand, the Standard edition, which limits the user to exporting programs to a single platform, comes in at a much more manageable $99. Regardless of the edition purchased, users get a six-month update program but no printed manuals or CDs (though these can be bought separately). 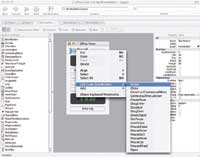 REALbasic sports a single window interface within which all the key commands and tools can be accessed.

REALbasic also has a reputation for being a bit buggy; the release notes that come with REALbasic 2006 Release 3 described no fewer than 477 bug fixes and tweaks over Release 2! Whether this is actually any worse than any other big, commercial program is difficult to say, but it has tended to colour the way experienced programmers view REALbasic generally. Among the bugs still present in the application is the improper handling of the â€œbrushed metalâ€ look, with some objects having the metallic finish applied properly, but others not.

A less obvious change, but perhaps more important, is the addition of Intel processor support. REALbasic can now export OS X applications as Universal Binaries or as applications tailored for either Intel or PowerPC processors. 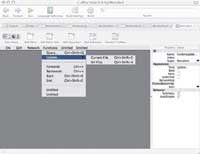 Adding menu bar items is easy, and their appearance and keyboard shortcuts can be previewed for Mac, Mac Classic, Windows, and Linux platforms.

REALbasic 2006 shares the same interface as REALbasic 2005, something that has divided long-time REALbasic aficionados. Older versions used traditional windows and palettes alongside the interface of the program being developed; REALbasic 2006 places everything inside a single big window, the integrated development environment (or IDE). Tabbed windows within the IDE appear for all the different parts of the project as they are added: one for the interface, another for menu bar items, and another for code, and so on.

On the plus side, the user can create multiple IDE windows for a single project, allowing simultaneous editing of different parts of the project. It is also possible to have the IDE windows for different projects open at the same time, something that is undeniably useful when comparing earlier and later versions of a given project. This was impossible with REALbasic 5.5, where only a single project could be worked on at any given moment. 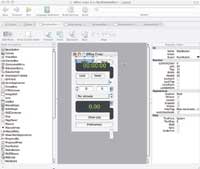 The new IDE interface generally works well, but it is slow to resize and redraw, and occasional visual glitches do appear.

But on the downside, the IDE windows devour screen space and force the user to work in a relatively confined space. Instead of being able to open, close, or minimise palettes as was possible in the earlier version, REALbasic 2006 has a cramped, cluttered feel that makes all the various options and settings much more difficult to find and use. The IDE windows also tends to resize and redraw rather slowly, with periodic visual glitches adding to the impression that REALbasic 2006 is a bit more sluggish than its predecessor.

Another big change touted by the REALbasic website is the ability to check code without needing to actually build and run the application. No mention is made of this useful feature in the manuals currently supplied with the program, and for a headline item, it is remarkably well hidden (itâ€™s one of the optional extras for the Editor menu). Of interest to those working on collaborative projects is the option to save projects in a version control format, making it possible to use REALbasic alongside industry standard version control systems such as CVS. 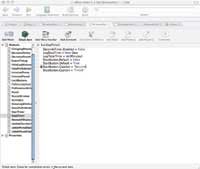 Though well hidden, the Check tool gives programmers a way to quickly verify code without having to build the program.

Notable gaps in the REALbasic feature set include the absence of icon building tools and graphics for things like toolbar buttons. On the other hand, an impressive array of objects, from HTML Viewers and Spotlight commands through to ODBC and MySQL database queries give the enterprising programmer plenty to play with. All in all, REALbasic 2006 remains one of the nicest ways to create programs, despite the slightly objectionable interface. The Standard Edition package is particularly good value, and the supplied documentation is clear and well written, making it relatively easy for novice programmers to get off to a flying start.