If you are new to a Mac, for whatever reason, you might thing why write an article about ejecting media on a Mac? You only have to pull out a thumb drive or push the button on the CD tray to eject it, right? Wrong. Ejecting media on a Mac is a little more complicated than that, especially if you are used to using a PC.

First, by media I am referring to any external storage device or item you might connect to the computer. This would include thumb drives, CDs and DVDs (internal and external drives), external hards drives, iPods, and sometimes cameras.

Let’s start with thumb drives, since they are the easiest to get wrong. One would think you could just pull a thumb drive out of the USB port when you are finished with it. However, if you do this on a Mac you’ll get an error message saying the device was removed improperly and you might have put the data on the device at risk.

I wouldn’t worry too much about the data. I have never seen any data damaged due to removing a drive the wrong way. However, I wouldn’t risk it. To remove a thumb drive properly from a Mac, you first need to drag the drive’s icon to the trash. The trash will turn into an eject symbol while doing this. Once over the eject symbol, release the icon, and it should disappear from the desktop. You can now safely remove the drive from your computer. Some thumb drives have a light on them to indicate they are in use. If your drive does have a light, follow this process and wait for the light to stop blinking before removing it.

A second method for ejecting the drive is to click the little eject symbol next to drive’s icon in the toolbar of any finder window. This will serve the same person as dragging the icon to the trash. Once the icon disappears, remove the drive.

iPods, some digital cameras, and external drives need to be ejected the same way as a thumb drive. However, iPods and some cameras can also be ejected with the little eject icon from iTunes and iPhoto.

Like all the other devices mentioned CDs and DVDs need to be ejected from the computer also. You can’t just open the CD drive by pushing a button. If your Mac has a drive tray with a button, try it out. It won’t open unless the drive is empty. 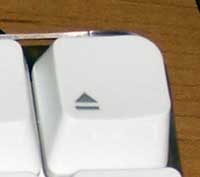 Of course, if you have been using a Mac for a while this is not news to you. However, I see newbies to the Mac have problems ejecting media all the time, especially with those thumb drives. Hopefully, this will help those people out.