Shortly after the PowerBook 5300 shipped in 1995 it was discovered that the installed Lithium Ion battery, then a new technology, carried with it a risk of severe overheating. Apple immediately recalled each and every one, a few of which had reached end users, and replaced the Lithium Ion battery with a Nickel Metal Hydride battery. No Apple computer since then has carried this risk, until now.

Some in the mainstream media have implied that Apple’s MacBook and MacBook Pro laptops may have the same risks as the recently recalled Dell laptops, since Apple also uses battery components from Sony. The MacBook & MacBook Pro don’t, but last week on Thursday Apple announced the Battery Exchange Program for iBook G4 and PowerBook G4. There are no reported cases of a 12″ iBook G4 or 12″ or 15″ PowerBook G4 catching fire, but if yours was purchased October 2003 or later follow the instructions on the recall web page to determine if your battery may have the problem and need to be exchanged. The 14″ iBook G4 and the 17″ PowerBook G4 are not affected, and not all 12″ iBook G4s and 12″ or 15″ PowerBook G4s are. I own a 15″ PowerBook G4 and the battery in mine is not part of the recall.

The battery recall does not mean there are any other issues with these laptops. Their failure rate is nowhere near that of the PowerBook 5300. The only computers Apple has made since the PowerBook 5300 (and the problematic Performas of similar vintage) that have had a much higher than normal failure rate are the white G3 iBook models, released between the clamshell G3 iBooks and the G4 iBooks, that were manufactured between late April 2001 and late October 2003. These iBooks have had numerous logic board failures, specifically with the graphics chip on the logic board.

Are there some that have never had this failure occur? I’m sure there are. My perspective is skewed, of course, because as an Apple repair technician I don’t see the ones that work. Our feature letter this month is about these iBooks. If you have one, and it is more than 3 years old, in my opinion it would be a good idea to be prepared to replace it just in case. Especially important is making sure your data is backed up. In the most extreme cases of this failure it is not possible to put the iBook into target disk mode to copy the data, requiring disassembly to access the hard disk.

Hi Tom,
I just finished reading your first column at MyMac.com and have a question for you. I have a 14″ G3 iBook that is out of warranty. During warranty it had many issues including having it’s logic board replaced twice. But now it is having the same problems that it had when the logic boards went out in the past – not booting, screen is gray with crazy lines on it, etc. I’m guessing that it might be the logic board again and Apple told me awhile back that it was going to be over $700 to repair. That is just not worth it.

I have an iBook G4 that I use now so I am wondering what to do with this broken iBook. Will it really cost that much to fix and is it worth the cost? Or is there a way to part out the iBook like taking out the hard drive, AirPort card, and other things? Right now it’s just sitting collecting dust. Please help.
Thanks,
Regina in Southern California

Regina,
It sounds like it’s the logic board again. That’s a known issue with the white G3 iBooks, which is why Apple created the iBook Logic Board Repair Extension Program. This problem does not affect the original clamshell iBooks or the G4 iBooks.

The cause is the failure of the graphics chip on the logic board, requiring it to be replaced. Unfortunately the repair isn’t always a permanent fix. I have seen many white G3 iBooks that have had this issue two or more times. I believe that the graphics chip isn’t getting the cooling it needs in the G3 iBooks.

You had AppleCare on your iBook that expired in November of 2005. The 3 year AppleCare coverage happens to coincide with the 3 year period Apple put on the logic board extension. on the logic board extension. The PowerBook 5300 repair extension went for 7 years, and I think 3 years is not long enough for the iBook repair extension. Unfortunately this means that it is a non-warranty. As for the $700 cost, that is much higher than I would quote. No matter how you would arrange the repair it shouldn’t exceed $500. In any case, the G3 iBook logic boards are only done as mail in repair due to supply constraints. The logic board can not be ordered from Apple.

Considering the failure rate on the G3 white iBooks, I don’t think I would do it outside the 3 years. This would be the 3rd logic board replacement for you. From what I can tell (I’m not an expert in used computer value), your iBook is worth about $300 in working condition. The repair will probably cost more than it is worth, and even if it didn’t I’m not sure I would do it as the likelihood of the failure returning is higher than average.

As for parting it out, it would be worth it only if you are experienced in taking iBooks apart. Be sure to use an anti-static wrist strap to avoid damaging the parts. If you would need to pay someone it’s too much trouble.

You could get a very good price for the AirPort card on eBay. That just slides out. The RAM might be worth the effort if it is at least a 512 MB DIMM. RAM sits under the AirPort card and a shield. You can use the AC adapter as a spare with your iBook G4. If your G4 iBook is also a 14″ then you have a spare battery, too. 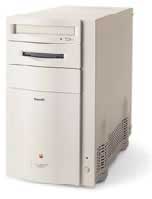 Hey guys,
A friend of a friend of mine has a Power Mac 8200 that she needs to get the data off to put on a new MacBook. I was wondering if you could point me in the right direction for a good method for transferring her data. Perhaps some way to attach an external hard drive or put her drive in an external case? Thanks for your help.
Chris in Australia

Chris,
The only port those machines have in common is the Ethernet port, and that is probably the easiest way to transfer the data. Any Ethernet cable will work, as the MacBook’s built-in Ethernet will auto-sense the connection and configure it appropriately. It will have the greatest chance of working if the 8200 has Mac OS 8.6 or higher.

Have both both computers running and connect the Ethernet cable between them. On the 8200, make sure AppleTalk is on and set to Ethernet in the AppleTalk control panel. In the TCP/IP control panel, set it to Connect via Ethernet, Configure Manually, and give it an IP address of 10.0.1.51 with a subnet mask of 255.255.255.0. In the File Sharing control panel, turn on file sharing with the “Enable File Sharing clients to connect over TCP/IP” option enabled.

On the MacBook, set up the TCP/IP tab of the Ethernet section of the Network system preference to Configure IPv4 Manually with an IP address of 10.0.1.52 with a subnet mask of 255.255.255.0. In the AppleTalk tab, make sure AppleTalk is on. If you do not wish to alter your existing network settings, you can create and switch to a new Location and delete it when the transfer is complete.

Once the setup is complete, select Connect to Server… from the Go menu in the Finder on the MacBook and connect to server address afp://10.0.1.51. Log into the 8200 using the owner name and password that are entered into the File Sharing control panel on the 8200. You should then see the icon for the 8200 on the desktop.

Send your questions to tom@mymac.com. I will personally reply to each message when received and select letters will be included in the MyMac.com Help Desk column.