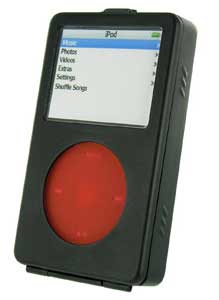 Time for another iPod case review. I have seen so many iPod cases, I fear I may eventually become jaded in reviewing them. Seriously, how many different types of iPod cases can you come up with? Well, in the case of the Aluminum V2 from PodsPlus, a lot.

The Aluminum V2, as the name suggests, is an Aluminum iPod case. Your iPod fits cleanly inside the back of the case, and you snap close (the a clasp)the front to seal your iPod in. The clasp feels very secure, so there are no worries about the iPod falling out.

The top of the case is open to allow access to the headphones jack and the sliding hold button. It is also where the clasp is located. The bottom is open to allow access to the dock port. Also on the bottom is the hinge that holds the two halves of the iPod together. The hinge is small, and for the most part unobtrusive. A regular iPod dock cable has no problem fitting in the opening, but there is not enough room for thicker iPod dock cables, such as the one that comes with the Harman Kardon Drive + Play. Is this a problem with the case, or with third-party iPod dock cable companies? I leave it to you to decide.

One of the problems with the newer iPods is scratching. Both the screen and plastic parts of the iPod are susceptible to ugly scratching. This is why there is such a robust after-market for iPod cases. But an iPod case should be more than simple protection for your iPod, it should also look as cool as the iPod itself. Here the Aluminum V2 really shines.

The scroll wheel is covered with a silicone cover that allows complete full access to the iPod controls. Rather than leaving a round cut-out like many iPod cases do, this is a great solution. It works fine, and I actually prefer the feel and touch of the silicone cover.

The case itself is made from anodized aluminum, which gives it both a solid and protective feel, but also keep the weight way down. The iPod does not feel much heavier inside the Aluminum V2 as it does without.

The screen is protected with a clear plastic screen, which I worried would lead to more reflection or loss of visuals. Neither is the case. The iPods screen looks as good outside the case as in.

You can buy the Aluminum V2 case in many different color combinations. For this review, I have the black case with the blue cover wheel. It is very cool looking. It retains the distinctive iPod look, but really grabs peoples attention. I have had not a few people as about it.

All in all, this is a fantastic iPod cover. As a measure of how impressed I am with this case, I plan on using it as the standard other iPod cases have to measure up to in my reviews. And those other iPod case companies had better Bring It, as the Aluminum V2 is going to be a hard act to follow.