Some of you might know that I work out of my home in southern Germany for the UK subsidiary of a US publisher. Working from home however also has its challenges. While a VPN client on my company laptop lets me connect to all network services in Oxford, it usually can be painstakingly slow. I am hooked up to a DSL line, asynchronous in nature, makes downloads much faster than uploads. Backing up my 1.5GB in various Outlook mail archives is not an option – not at all.

When those mail archives were smaller I used to back them up to CD for quite a while, it started to get annoying when I had to create more than one CD at a time. So what to do?

I had purchased a 160GB Iomega MiniMax hard drive a little while ago, which nicely connects to my MacMini via the firewire cable. The drive itself has two advantages only, it fits nicely under the MacMini and it was cheap – everything else hasn’t convinced me yet.

Getting the external hdd allowed me to start making backups of those files I really would hate to lose. DÃ©jÃ  Vu comes with Mac OS X and is a simple to setup and schedule application. You pick the folder or files to backup, select a destination, say whether you wish to run the backup daily, weekly, monthly or manually an that’s as much trouble as DÃ©jÃ  Vu will give you. 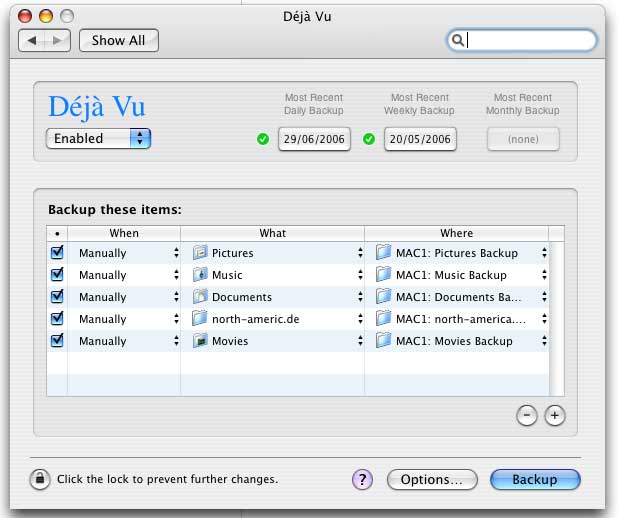 However at work I use a Dell Latitude D400 laptop with Windows XP Professional – and for that I hadn’t quite found a solution. The easy to use Windows Sharing on Mac OS X might come to the rescue…

My Mac and my company laptop are both on the same DSL router, thus they form a small local area network. There is another Windows 98 computer attached, which is a difficult story to explain, so I won’t. Just remember that Win98 machine later, it is going to give us trouble.

So I tried System Preferences > Sharing and did the Windows Sharing. Simple as that? Unfortunately not, I am afraid. 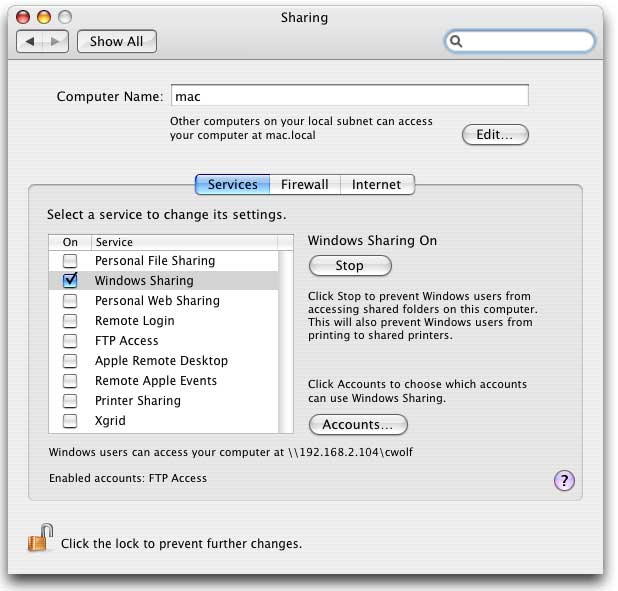 Our friends at Apple have figured out that sharing resources should be real simple and it is as simple as checking a box and noting the internal IP of your Mac, but this only works, as long as you wish to share, your Mac’s internal HDD. But I wanted to share my Firewire Drive and to be more specific, a partition on that drive that I had set aside for company backups!

A bit of reading up on the web confirmed my suspicion, Mac OS X won’t do the job on its own. Simplicity often comes at a cost, lack of features. But as usual a smart programmer created a solution:

It is an extremely feature rich little add on to Mac OS X, which takes up residency in your System Preferences, and which allows you to pretty much share, what you’d like.

The application is donation ware and I think it is great – I honestly do. There are only two problems – first there are virtually too many options that I can’t even begin to understand and there is too little documentation. But being too feature rich can’t really be a problem, and with software that is virtually free, one cannot expect too much documentation – still without documentation many of the features will never be utilized by me. 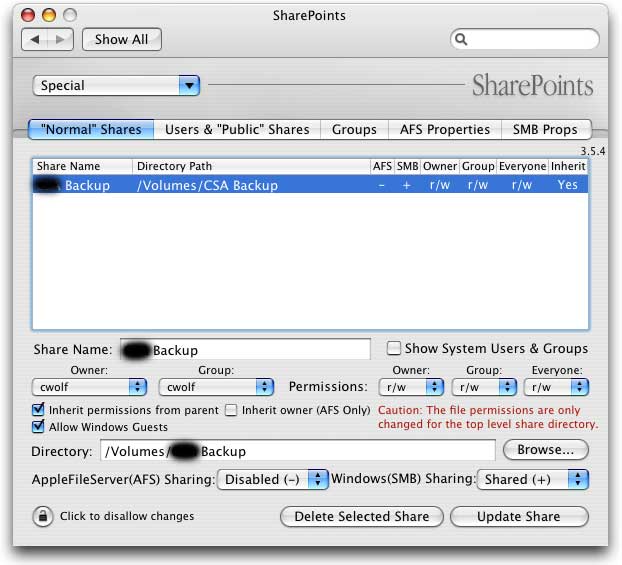 But luck was on my site again, it was rather simple to do the basic set-up. I gave it a name, browsed to the volume I wanted to share and gave myself some permissions.

When it came to the permissions I unfortunately had to learn that Windows 98, while it recognizes that it needs to supply a user-id and password, will just not transmit it in a way that is understood. Whatever I did, I couldn’t get it to work and thus had to go in and ease the permissions a little. In a way that is extremely annoying, in another way it isn’t a big deal.

It isn’t that big of a deal, since I consider the external hard drive a useful tool, but only switch it on, when I intend to use it. It might be a terrible waste of good hardware, but that’s what I do.

At this point I am done with the Mac portion of this article, I have attached my hard drive, installed sharepoints and shared the drive. The next bit is to map the network drive in Windows XP, since nobody seriously can be asked to type in a IP address every time they wish to access the drive.

At this point it is important to point out that Readers Discretion is advised and young children should not read on without Parental Guidance. The horrors of Windows XP could cause young children considerable harm and I don’t want to be responsible for another Windows-Phobe… 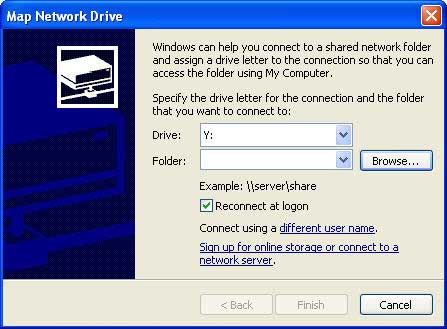 The next menu will allow to select a drive letter, then click browse to find the drive or folder to map your drive to: 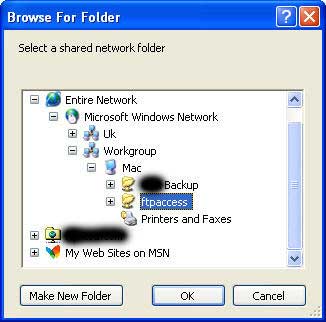 Sorry for blacking out so much in this screen shot, but there have to be some secrets. Anyway, my Mac shows up under Workgroup and I simply can select the folder I’d like. Clicking OK…done. I didn’t really execute this map, so I’ll continue with another drive, that I have set up and actually use. 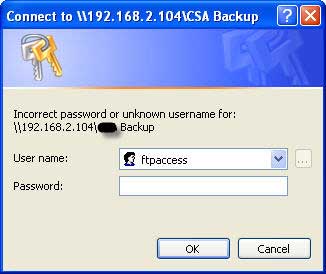 After you successfully completed the share click on the new Drive-Letter. If your permission require it, you will now be asked for a user-id and password to authenticate yourself as a member of the appropriate group. 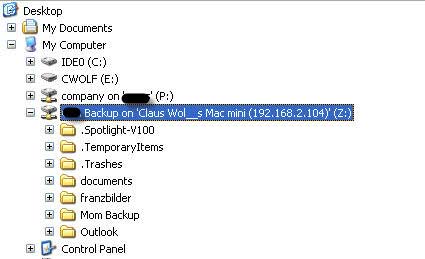 So how do I do those backups? For lack of a better solution, what I do is click and drag the folders I want to backup to the drive once a week. Not a perfect way, but simple and fast enough and since I am not always on the network when the backup would start, it is almost better to do it manually. After all I just backup the important files and those are all kept in two main folders 😉

Anyway I am done now and really what I’ve achieved is to setup a Network Attached Storage Device, which is managed by my Mac. It has permissions, it is versatile and lets you share just as much or as little as you’d like. Sharepoints is an excellent addition to Mac OS X and I would have wished that Apple had thought of including this functionality.

If you have a similar need to me, now you know where to go. But hang on, Sharepoints is useful beyond setting up a hard drive for use with Windows XP, it does of course also do the same job within a Mac only network, or a mixed Windows, Linux and Mac Network…

Cost: whatever it is worth to you