I know, more iPod cases? Yup. In my opinion, the more iPod case reviews the better. There are so many iPod cases on the market, that when I bought mine I depended on the reviews I found to help me make a decision. Hopefully, this article can help you out.

Protection
When I shop for an iPod case, protection is number one on my list. The TrailVue and Sidewinder are two very different types of cases for the 5th generation iPod. The TrailVue is a soft fabric type of case, while the Sidewinder is a hard-shell plastic case. While different in materials, I would have no worries about either case protecting my iPod.

The TrailVue is made of a variety of materials, and a heavy board under the fabrics supports the front and back of the case. It also feels like there is padding above the boards. The case has a flip cover, which connects to the case over the dock connector by Velcro. When closed, the only exposed areas of the iPod are the headphone jack, and a small section at the corners of the iPod. 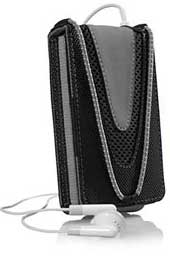 When opened, a soft transparent plastic protects the majority of the iPod. The click wheel is exposed, but if you use the protective film I mention below, the wheel will be protected. Opening the case also allows for access to the hold button, as the top of the iPod is freed up, and the dock connector also becomes accessible. 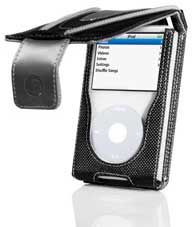 In addition to the case protecting the iPod, the TrailVue comes with a nice plastic film to cover the entire front of your iPod, including the screen and click wheel. I applied it with without almost any air bubbles. Removal is easy, and no residue is left behind. This is a nice bonus from Marware that adds protection from scratches for those times when your remove the iPod from the case. This is not a review for the film, but if it was I would give the film 4.5 out of 5.

As I mentioned, the Sidewinder is made of a hard plastic shell that will definitely protect your iPod. I tried dropping it, hitting it on a desk, even bending it from an opening- nothing. This is definitely a hard, durable shell. The only areas of the iPod left exposed are the click wheel, the headphone jack, and the hold button. The screen is protected by a hard transparent shell. A removable portion of the main case protects the dock connector. Marware does not include the protective film with this case, but it would have been nice considering the click wheel is exposed.

Belt Clips and More
The second item I look for in an iPod case is a belt clip. Some people donâ€™t care about a belt clip, but for me it is a must. Both of these come with high quality, removable belt clips. The belt clips are not the swivel type, but a swivel clip and other accessories (such as a bicycle mount) are available for under $10 each. Personally, I prefer a swivel clip, and would like to see that as a standard feature. Both cases use the same clip system and I did find that the clips were a little confusing to attach.

Another nice feature shared by both cases is the ability to hold your headphones when you arenâ€™t listing to the iPod. The TrailVue uses a bungee system, which wraps around the iPod. Your headphones are strapped to the iPod under the bungees. 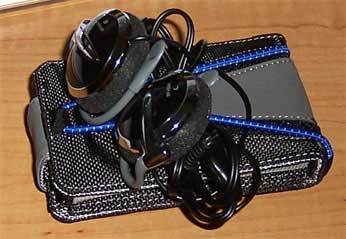 The Sidewinder uses a pullout system to wind your headphones around an extension that comes out of the side of the case (hence the name Sidewinder). 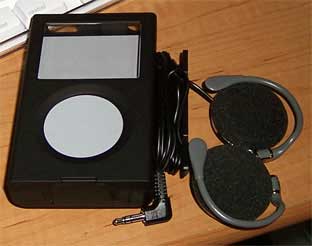 While meant to be used with earbuds, you can see from my images above that I had no problems fitting my ear-clip style headphones on either system. I guess a standard headphone would work, too. You would just have the main unit hanging from the iPod.

I addition to these features, the Sidewinder has a kickstand on the back of it for setting your iPod down on a table top at an angle. You can easily stand the iPod in the Sidewinder without the stand, but the angle is nice for viewing the screen. While I like this feature, I did have the kickstand come off the case almost every time I tried to open it. It is easily put back in, but this is a real annoyance. 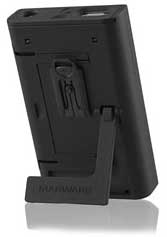 Fit
With the exception of silicone style cases, I have never tried an iPod case with a snugger fir than these two cases. The TrailVue is made to fit both the 30gb iPod and the 60gb iPod in the same unit. The sides are made of an elastic material that stretches with the iPod. With that said, you would think the case would be a little looser around the 30gb. Nope. My 30gb was so snug in the TrailVue, I can only imagine how snug a 60gb model would be. While snug, I was able to remove the iPod with ease.

In testing the cases, I tried the TrailVue first. I didnâ€™t think anything could fit the iPod any better. I was wrong. The Sidewinder is like a second skin for the iPod. Being a hard shell case, it does not expand like the TrailVue. The case comes with a clip-in adapter to fill in some space for the 30gb iPod. This is not the case for you if you like to remove you iPod for other accessories like a dock.

Style
After all the items mentioned above, Iâ€™m not going to buy an iPod case that I donâ€™t think looks nice. Both of these cases pass the test.

The TrailVue is the more stylish of the two. The different fabrics that make up the case provide different shades of gray and textures to the look of the case. The triangular design is nice, too. Remember the bungees for the headphones? This case comes with interchangeable bungees in five colors, which are fairly easy to switch.

The Sidewinder comes in your basic matte black. Nothing flashy, but it does look nice. A white case to go with the white iPod would be a nice option here.

Ratings
Overall, the TrailVue and Sidewinder are two nice cases to consider when shopping for a 5th generation iPod case. Both cases are reasonably priced, and fall into the average price range of better cases. I would trust either one on my iPod.

Sidewinder
MyMac.com rating 4 out of 5

Pros:
Both cases provided great protection for your iPod, and look nice at the same time.
TrailVue comes with the bonus transparent overlay.
High quality belt clip.
iPod fits snug into both cases.
Both cases have convenient headphone storage.
Plenty of accessories available for both cases.

Cons:
I would like to see an included swivel clip, instead of that being sold as an accessory.
Sidewinder provides no click wheel protection.
Sidewinder kickstand kept separating from the case while opening.