I have used a Windows powered PC for much longer than a Mac, and the Mac just blown me away. In my private life there is (virtually) no room for a windows machine, though I continue to use a Dell laptop for work. Users of Windows have funny habits, for example, we like to start our working days with updating the virus and spyware definitions and once every quarter or so most of us go and defragment our hard drives. Now with Windows XP and its NTFS file system this isn’t as urgent a problem as it used to be, but it remains a habit.

Being relatively new to Mac OS X and the HFS+ file system I started to wonder whether it was necessary to do my Mac a favor and defragment it’s hard drive? I couldn’t find a defragmentation tool installed, so I started to read up on the Internet and most people kind of agree to disagree on the question of disk optimization.

What is “fragmentation” and how does it happen?

Think of your hard-drive as a two dimensional rectangular space and think of your data as little square building-blocks. When you start filling your hard drive you will add your building blocks from top left to top right, and when you reach the end start a new row, and so you continue. As soon as you delete data, you will remove some building blocks, but the space remains empty for the time being.

So as you fill up your hard drive, move or delete files you will get more and more empty spaces all over your storage space. This is what many people would call “Free Space Fragmentation”. [1, 2]

To be fair this is not what most people refer to when they talk about fragmentation, but it can become a problem in its own right.

The other type of fragmentation, the one most people refer to, is the one, where files that belong together are spread around the hard drive making your computer look for all those files and “waste” a lot of time in the process.

The makers of iDefrag give a nice example “…in these days of constant security updates as replacing operating system components not only increases the potential for file fragmentation, but also creates a more insidious problem—over time, the operating system itself ends up scattered all over your disk…” [3]

I would compare it to shopping in a supermarket, which is really badly organized. You know, usually all the backing stuff is in one place. Now imagine you need backing power, flour, sugar, salt, etc. and imagine you had to get the backing powder from aisle 15, the sugar from aisle 2 the salt from aisle 24 and so on. To make your life more interesting you must get them in precisely the order in which they are listed on your shopping list. You’d run around like a mad man… [4]

As files grow in size and large junks of empty space start to disappear, something else could become a potential problem. Go back to our first comparison of the hard drive as a rectangular space and data being the little building blocks.

It is quite easy to see how a large file (e.g. a movie file) might get split in two or three sections to fit the “empty space holes” and this is the real nasty fragmentation, as it slows down your system when accessing the file.

So this is general theory, how about Mac OS X and what does Apple say?

In reality the HFS+ file system in use by Mac OS X is very good at avoiding fragmentation, especially for small to medium sized files, even the makers of iDefrag admit that [3].

Our friends at Apple even wrote an article “About disk optimization with Mac OS X” [5] and there is lot of valuable information in there. I definitely recommend you read it. Basically the author argues many points that are quite true, here is a quick summary of the points I found most important.

1) Hard Drives are much larger today

Remember the concept of the big video file being split up – this is really only a problem if your hard drive is nearly full and so Apple states:

“…the file system doesn’t need to fill up every “nook and cranny.” Mac OS Extended formatting (HFS Plus) avoids reusing space from deleted files as much as possible, to avoid prematurely filling small areas of recently-freed space.” [5]

Another major cause, and Apple is quite right in pointing this out, was that data was frequently just appended to an existing file making it grow and ultimately become fragmented (as space runs out) and Apple has a good argument for that one as well:

“…With faster hard drives and better caching, as well as the new application packaging format, many applications simply rewrite the entire file each time. Mac OS X 10.3 Panther can also automatically defragment such slow-growing files. This process is sometimes known as “Hot-File-Adaptive-Clustering”…” [5]

A hot band in Mac OS X is a number of files that have been placed together to allow for “rapid reads during system startup” [5] – thus moving them might cause your computer to grow slower, rather than faster.

The makers of iDefrag state on their website [3] that their tool is able to recognize these Hot Zones and deal with them appropriately.

So all in all, Apple, the maker of the operating system suggests that you really shouldn’t have many problems with fragmented files and free space fragmentation should not be an issue. They admit that in some circumstances you might want to use “third-party disk utilities” and that’s why I am writing this review.

Mate, get on with it… what about that iDefrag tool…

iDefrag is a product by Coriolis Systems and comes at a reasonable price of €25 + VAT. With iDefrag you also get access to Coriolis CDMaker, which will create a bootable CD for you, in case you need to defragment your one and only hard drive (as I did).

After downloading and installing both products you are probably tempted (as I was) to take a look at your hard drive. The iDefrag window has a little volumes panel, click your hard drive and let iDefrag analyze your disk. At first you will get a very generic window with a little banner underneath, just telling you about the free space fragmentation:

and a little while later it will be all colored in

Those colors of course have a lot of meaning, they tell you what type of file you are looking at and also the main window will have changed. And look a bit like this (note this particular screen shot was taken a lot later than the others) 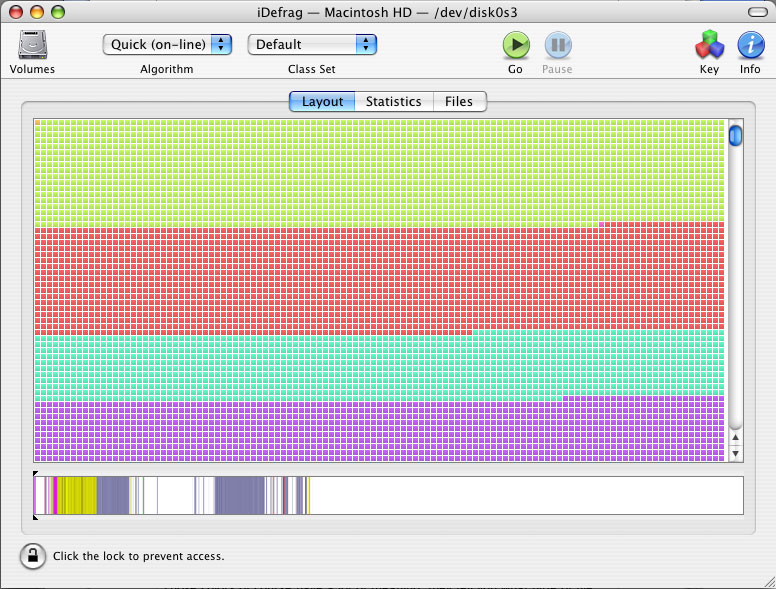 Personally I am not big on colors, so I prefer the statistical view, which are very detailed, and give you a good understanding on whether you need to take action, or not: 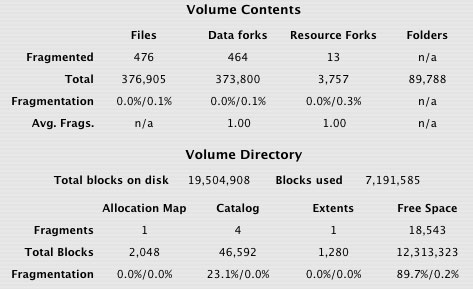 Looking at these statistics, I think it is fair to say, that Apple is quite right on saying that as long as you have a reasonably sized hard drive Mac OS X and HFS+ will take care avoiding file fragmentation, while free space fragmentation was big on my volume.

iDefrag has five defragmentation algorithms, the description below is from the help file of iDefrag:

Compact – Moves all files on the selected volume to the beginning of the volume. Useful for resizing a volume, or to improve free space fragmentation without running a full optimization.

Quick (on-line) – Attempts to defragment fragmented files without unmounting the selected volume. This is only possible for ordinary files; volume metadata, the files with hard links and some other files cannot be defragmented in this fashion.

Optimize- Runs iDefrag’s disk optimization algorithm, which rearranges files on the disk under the control of the selected class set. Files can be grouped or sorted arbitrarily, based upon file name, size, and many other attributes. Note that this does not compact or rebuild the B-Tree files like the Metadata algorithm does.
Full Defrag – Runs the Metadata algorithm and then the Optimize algorithm. If you have set the options to compact or rebuild the B-Tree files in the Metadata preferences, this will be done after running the Optimize algorithm.

For the purpose of this review I went in and created a bootable CD-ROM with Coriolis CDMaker, restarted the system and let the Full Defrag algorithm run and optimize – it takes a while to complete, but it has a lot of work to do and in the end I had a nicely optimized disk. See below for the result: 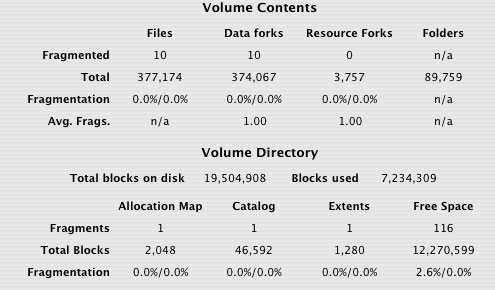 It was real simple to use! The interface is very clear, help files are descriptive and the interface itself shows you precisely what to do.

Pick your volume, have it analyzed, select your algorithm and click the little green arrow button. If the arrow button is red, it means you can’t perform this operation, e.g. a Full Defrag on the system volume. In that case, reboot your system with the boot CD created by Coriolis CDMaker and execute it from there.

With a utility tool there isn’t much more to tell – it does the job it set out to do and didn’t create as much as a single problem.

So do you need it?
If you are an average user, who doesn’t do much work with large files and/or video and has large enough of a hard drive – well, I think you won’t really need a disk optimization tool, such as iDefrag, very often. If you use large files a lot I personally think running a disk optimization every so often, will allow you to avoid any problem from even surfacing.

iDefrag does what it says on the package, comes at a reasonable price and I would very much recommend it. Superb ease of use. Right now it lacks a Universal Binary

System Requirements:
Mac OS X 10.3.7 – 10.4, 450MHz PowerPC or better, 512MB RAM. Supports internal and external disks. To defragment your boot volume, you need to boot from a different volume (except for on-line defragmentation feature). iDefrag does not yet support Intel Macs.

Not a Universal Binary yet – however Coriolis Systems is working on an iDefrag 1.5 (currently in Beta) making this product available for Intel Macs soon.