When new Macintosh owners leave the store, they’re usually toting Apple Cinema Displays in their shopping carts. But many people don’t know there are alternative choices for LCD displays, many of which are quite competitive in both price and quality.

MyMac Labs’ Nemo+Weeks duo has been testing a NEC MultiSync 20WMGX2 20″ display, and found it to be a worthy alternative to the 20″ Apple Cinema Display. Image quality is equal (at least) to Apple’s, and feature set per dollar is superior.

Once freed from its Styrofoam and plastic cocoon, the NEC is roughly the same physical size as an Apple 20″ Cinema Display, and resolution is identical (1680 x 1050 on our computers). A built-in set of speakers runs along the bottom of the bezel. Don’t throw out your Harmon-Kardon Sound Sticks, though.

I conducted my initial tests using a dual 2.0 GHz G5 PowerMac. I discovered one significant difference between NEC and Apple displays: the NEC ships with DVI and VGA connectors, but no ADC connectors. Nemo has more to say about this in his comments. With only one ADC and one DVI socket on my Power Mac, I had to punt.

Impatient geek that I am, I unhooked my Dell 2405 monitor from the G5’s DVI socket, and connected the NEC. Since the NEC has built-in speakers and four USB 2.0 ports, I attached the various USB and audio plugs to the G5’s sockets.

I found the various plug locations on the NEC hard to access. Located under the support arm attachment, the plugs are awkward to reach, and the labels are hard to read. Once attached, there’s a slip-on plastic cover that nicely hides the various ports. Most users will have to do this only once, so you won’t be dealing with poor ergonomics very often.

For any gadget, the moment of truth comes when you press the “On” button. The NEC came to life in full living color. Where did I put my Ray-Bans? This monitor is BRIGHT. Really bright. At maximum brightness, the NEC is noticeably brighter than an Apple 20″ Cinema Display. You can use this monitor in any room, no matter how brightly lit it may be. I found it most comfortable to set the display at 75-80%. In the long run, having to squint at an overly bright monitor leads to eye fatigue. At night, you’ll certainly want to reduce the brightness, which is easy using NEC’s physical “Menu/Exit” button and NaViKey or four-directional joystick, immediately below the NEC logo at bottom of the display.

The quality of the screen is distinctly different than Apple displays. NEC uses what it calls OptiClear technology to give the screen a glossy appearance. Images and text have more contrast and crispness. Unfortunately, it also makes the screen more prone to show reflections from other objects in the room. If you can properly orient the display, you’ll enjoy the glossy look, otherwise you may find the reflections distracting.

The 20WMGX2 is a landscape display. I prefer portrait orientation, but this is simply a matter of taste. Audio quality was good, but the speakers had little oomph. If you don’t already have a set of speakers, you may find these OK, but almost any external set will produce better sound.

After a couple of hours of using the NEC, real life interfered, and I had to pass the unit to Nemo to complete the review. I was not able to test the various TV and picture-in-picture functions, as I don’t have a cable TV outlet near my computer.

I liked the unit. It’s got candlepower to spare, fair speakers, a good selection of USB ports. The video is more configurable than Apple’s displays, and the front panel controls are easy to use. For the same price as an Apple 20″, you have plenty to think about before you buy.

Using side-by-side visual comparisons between Apple’s current 20″ Cinema Display and NEC’s versatile, affordable new 20″ MultiSync flat panel model is illuminating, at the very least. My test computer is a dual 1.8 GHz G5 with 2 GB of memory, running OS X Tiger 10.4.5, the latest and greatest. I put both displays into mirror mode, so what you see is what you get, identically, left and right. See photo below: 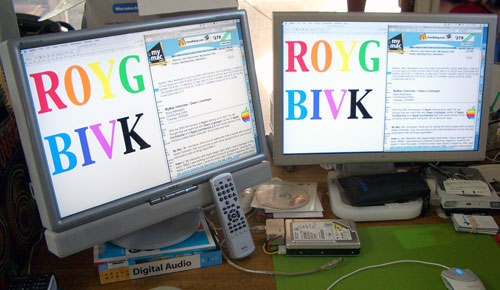 Let’s get a couple of minor grumbles out of the way first, to balance the praise we’ll be handing out further down the page:

Contortion? Some of the many connector ports on the NEC are a bit tricky to reach, as David mentions, being tucked underneath the rear housing. There is a major difference between how an engineering design department decides to place ports and how your typical home or office user wants access to them.
Quietude? Audio output from the computer is feeble through NEC’s built-in under mounted speakers, although volume is nice and loud when the display is in TV or video mode. How strange.
Glare! NEC’s glass OptiClear front provides impressive text and image clarity, but because it is g-l-a-s-s, you need to make sure there is no window or other bright light source directly behind you.
Profusion of riches! This monitor has so many features and options that a typical user won’t be aware of 90 percent of them, much less try to figure them out. We recommend you have a resident geeker on hand to help you determine which of the many settings are most pertinent, in each of NEC’s many native computer and video modes.
Manual too brief? The printed manual is substantial, but as noted above you’ll need a techie to help you comprehend most of it, which is not a complaint. In fact, if the manual was twice as long it would be twice as useful. The English portion of the English/French manual is 30 pages, as is the French section.
Remote out of control? Don’t lose NEC’s custom remote control, or you are sunk! The display remembers previous settings, so when you migrate from TV to computer, only the handheld remote will allow you to change viewing modes. Is this a bug disguised as a feature?

While I was waiting for NEC’s DVI/ADC adapter to arrive, my wife and I used the NEC as our home video screen, instead of our prehistoric Panasonic traditional television. We were immediately impressed with the clarity of its presentation of full-screen DVD and VHS video programs, all with ample audio volume.

Not being TV people, we don’t have a cable television subscription, and our analog rabbit ears RF antenna for generic TV channels doesn’t produce a clear signal on the NEC. Most of you are cable TV watchers, so this won’t concern you.

Videos, in contrast, are great, and we doubled our Netflix quantity from one at a time to two, so we’re never more than a day away from watching a movie on the NEC. Traditional VHS movies appear much better on the NEC than on our television. Your mileage will vary on all of the above, depending upon your equipment at home or office.

There are many potential uses for NEC’s picture-in-picture (PIP) modes, as well as its variety of video display configurations. This review concentrates on using MultiSync 20WMGX2 for your primary or secondary computer monitor. Additional reviewers will contribute to the discussion as this model achieves greater exposure. Depending upon how long Weeks and I are able to borrow this unit, we may prepare a Phase II review on its video capabilities.

Please take a few minutes to visit the web site, to see all its abundant specs and download a PDF and complete bilingual manual, if you are interested in learning about all its attributes. NEC does a nice job with this published material.

Side By Side, But Which Side?

David’s narrative above doesn’t fully explain the DVI/ADC connector situation. All current Apple computers are inherently capable of connecting to DVI displays. G5 PowerMac towers have two monitor ports, one each for DVI and ADC, which was the previous interface. To compare NEC and Apple displays, I needed to obtain a DVI-to-ADC connector cable, allowing me to run both monitors simultaneously. These adapter cables are available online for roughly $50, and NEC provided one to assist us during the review period. NEC’s MultiSync 20WMGX2 can easily be plugged into any Apple DVI port, exactly like a Cinema Display.

Persistence paid off, because I wasn’t sure at first how to use the ADC/DVI adapter I received from NEC. The final configuration, which works perfectly, allows users to have either display be primary or secondary, whether to the left or to the right, or have them mirror one another, meaning both show the same screen content.

On a G5 PowerMac tower, for Apple Cinema Display to be primary, connect the adapter to it, and insert it into the ADC side (right rear, when looking at the ports). Then connect NEC’s native DVI cable to your G5’s DVI port, restart your computer, and use your Displays Preferences panel in System Preferences to set up the Arrangement to your personal requirements.

The actual doing took me only a minute or two, but coming up with this configuration of cables and connectors took me a little while to determine. To eliminate glare in my home office, my glare-free Apple Cinema Display faces me full frontal, and the NEC unit is to my left, facing the monitors, at a slight angle off center, with lower bezel corners touching.

NEC is a little shorter in stature than is Apple (the displays, not the companies), so two titles from Peachpit Press (awaiting review) elevate NEC to the exact height of Apple, which is on the movable base made by MaxUpgrades.com

MultiSync 20WMGX2 has its own rotating base, which is wonderful, and comes with a full three-year warranty, which is terrific. The company provides worldwide phone and email tech support, that we did not need to use during our review period.

And the Winner Is?

[Still Nemo speaking] NEC is going to have to wrestle with this lean, mean reviewer to get me to return their MultiSync 20WMGX2 monitor. The video/audio qualities alone make it an attractive, high-end VHS/DVD addition to my living room. For computer display purposes, it’s at least the equal of Apple’s $800 stock Cinema Display, and NEC’s has a lot more features (except a FireWire hub) for the same price. Angle of view is superior on the NEC.

Graphics professionals won’t rush to purchase MultiSync 20WMGX2, because it’s not a reference standard display, although NEC does make such monitors (watch MyMac.com for future reviews). In my personal Photoshop tests, colors are bold, accurate, and exciting on this review NEC, and I’m using it daily with equal results to the Apple display. Whites are really white, and colors appear with brilliance.

For expanded real estate, you may be able to buy the same number of pixels from Dell or elsewhere for less money, but you won’t easily be able to match NEC’s combination of features and styling. Our silver-grey review unit looks great adjacent to Apple’s polished Cinema Display, and the NEC also comes in black.

David Weeks and I agree on a strong 4 out of 5 for our MyMac.com rating. This NEC MultiSync 20WMGX2 would receive a perfect score if its computer audio was louder, and its chassis port access was more convenient. For simple plug and play of computer/video, it’s a winner.