The iMac, the new Mac Mini and MacBook Pro all ship with Front Row (and a remote control), allowing you to bring your Videos, DVDs, Music, and Photos from your Mac to your living room. Except for the new Mac Mini none of these was really designed to sit next to your TV, and I have to congratulate the Apple team to finally recognizing the perfect form factor. When I originally wrote this review (last week) a Mac Mini next to my TV was still a project and now all you have to do is go down to the shop. But hang on, that Mac Mini G4 of yours is still going to be up to the task, all you need is the right software.

If you listen to the MyMac Podcast frequently you might remember an episode in which Tim reported about his endeavors to connect his Mac Mini to his TV-Set. Tim had his own way of adding a media center software and it made me curious enough to investigate, but I didn’t have access to Front Row.

The nice people at Equinux must have had the same type of curiosity, since they developed and offer MediaCentral as a free download from their website. It is only 1.8MB in size and once installed, opens by pressing SHIFT+ESC. 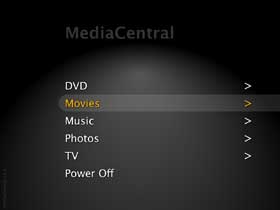 MediaCentral sports a clean, uncluttered interface and plays some ambient background music all the time. It takes over your entire desktop. Your mouse is rendered useless and you have to either use the arrow keys of your keyboard, or preferably a remote control.

The application itself will always be compared to Apple’s offering and if we do so, we should look at the integration of your data. When you select the Movies menu, you will not only see the contents of your Movies folder, but also your EyeTV recordings, if you have the application installed. You also get access to Movie Trailers from the web, but I am far more excited about the EyeTV integration. Mostly as Front Row hasn’t thought of this yet a major plus for MediaCentral.

If you have an EyeTV 200, 300, 310, 400, or 410 you can even get MediaCentral to display live TV for you, but unfortunately my EyeTV for DTT isn’t supported. Am I bothered by this? Not really. If I want to watch live TV, chances are that I will do so using well my TV. However it is great to know that I have simple access to my recordings later on.

In the TV menu you’ll find Web TV stations, like BBC News and this again is a nice touch, at least if you have access to broadband internet and assuming the show will offer you full resolution. The BBC, for example, only offers full resolution for users within the UK, so what I get is watchable, but rather ‘pixilated’ (if that is an actual word). This is no fault of the software, just the way the BBC operates.

MediaCentral incorporates your iTunes Music Libraryand you can access your titles quickly and comfortably; your iTunes playlists are available and when you play a song the album art is displayed along with a moving slider indicating time passed very nicely done. 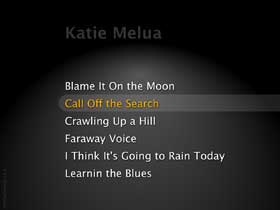 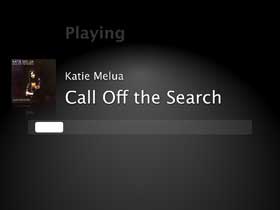 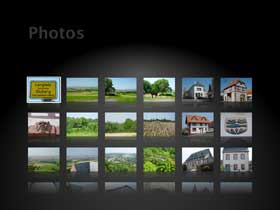 Being a decent Front Row replacement, your Photos are available as well and simple slide shows are possible. There is only one slide transitions (dissolve) and to be honest it would be cool, if MediaCentral could harness some of the power iPhoto has to offer.

You can also play DVDs, but I hazard a guess that most people will rather use their dedicated DVD player, but should you install this software on your iBook and have a remote control with you, you could start controlling your DVDs from the other end of your hotel room not that they are usually that big 😉

Conclusion:
To be quite honest, so far I have been skeptical of taking my Mac Mini to my living room, however having seen what MediaCentral is capable of achieving I think I will reconsider. The pure fact that this software exists is testimony to the fact that Front Row touches a nerve, but Apple’s offering just isn’t available widely enough and lacks some features. If you are looking to experiment with a media center for your Mac, this is the software to go for.

There is some room for improvement, like teaching the software to jump straight to my iTunes library when I select Music, rather than displaying a single entry menu saying iTunes first. Same is true for the Photos menu.

I very much like the integration of my EyeTV recordings and hope for my hardware to be supported in the near future.

The integration of movie trailers and web TV stations is a nice touch, but I would like to see the ability to add my own, like ClickOnline from the BBC.

All together I was very, very impressed and while there is room for future enhancements, I think I am justified in awarding 4 out of 5 stars.