Back when MyMac.com was known as My Mac Magazine, my desk was in the basement. I would work on the issues of My Mac mostly at night, having to work during the day. Not until the kids were in bed would I finally sit down to get some writing or editing done on the upcoming issue, and usually by then it was dark. While there were lights in the basement, they always caused too much glare on my monitor, so I would usually work in the dark. Not being a perfect typist, then or now, I had always wished there was a way that the keys on my keyboard would light up.

Over a decade later, I finally have my wish come true. The X-Slim keyboard does just that and while that was my main interest originally in the X-Slim, itâ€™s not the only feature.

As the name suggests, the X-Slim is a slim style keyboard. It plugs into your Mac via USB, but unlike the standard Apple keyboard, thereâ€™s no USB plug on the X-Slim to plug your mouse into. This is a major drawback in that you will now have to have at least two cords from your desktop or keyboard drawer. The standard Apple keyboard actually has two USB ports, one of which I plug my mouse into, the other I plug my PowerMate. So now, not only do I have three USB wires coming from my desk, two of them require a USB extension to reach the computer. So I have traded my larger keyboard for a smaller, slimmer one, but have added a lot more cable clutter.

I enjoy the feel and responsiveness of my PowerBookâ€™s keyboard, more so than the extended white Apple keyboard that shipped with my G5. The flatness of the PowerBook keyboard simply feels nicer to me; so one of my hopes was that the X-Slim would fill that desire on my part to get the PowerBook feel on my desktop machine. Thankfully, the X-Slim does give me some of the same feel, and is, in my opinion, a nicer keyboard to type on than the standard Apple keyboard. When you spend so much of your time typing away on the keys, itâ€™s important to have a keyboard that responds to your likes. So will you enjoy the tactile and comfort of this keyboard as much as the standard keyboard? I canâ€™t say; itâ€™s a personal thing. I enjoy typing on it. 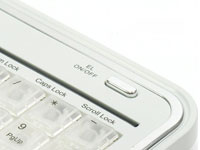 Back to the feature that made me want to review this product more than any other: the light-up keyboard feature. The ability to turn on and off the glowing keys is a great feature as the X-Slim sports a small on/off button in the upper right corner of the keyboard. This button stays lit at all times, so even in complete darkness, you will have no problem finding the button to turn on the lights.

The light itself is a muted blue, very easy to see in the dark, but not so bright as to be distracting. All keys seem to glow with the same level of brightness, and there are no dark spots. The painted on letters on the keys themselves, however, are a little small, and not as easy to read, as I would have liked. Talking about this keyboard on the podcast, for instance, I lamented the omission of an eject key for the CD/DVD drive. i-Rocks pointed out that there is, in fact, an eject key: F12. Sure enough, there it is. But the eject icon is so tiny, I simply missed it.

The X-Slim is laid out a little different than a standard Apple keyboard. The arrow keys, for instance, are placed vertically to the right of the main keys, which I still havenâ€™t gotten used to. But the biggest omission is the absence of volume up/down and mute keys, which are sorely missed. So much so, in fact, that while I like this keyboard a whole bunch, I wonâ€™t use it as an everyday keyboard, simply because of the absence of these keys. Having talked to i-Rocks, however, itâ€™s my understanding that there is a future keyboard in the works which will address this issue.

All in all, I like this keyboard. I think a better design would be one that the letters or icons themselves were lighted, rather than the entire key. This is a comfortable keyboard to use, slim, and easy to adapt to. If you donâ€™t care much about the arrow or volume control keys, or not being able to plug other USB devices into the keyboard, you will be happy with it. The design is nice, although I donâ€™t know why there is a faux-chrome wrapping around it. It doesnâ€™t add to the overall look or feel of the keyboard, and would probably look nicer had it been left off. But for a $65 lighted slim-style keyboard, I think this is a nice product.