Apple has updated iTunes three times in the last three months. Each update of this popular jukebox has increased the amount of functions that you can do with it. I remember back in the day when it just cataloged and played MP3 files.

Now it downloads and plays songs, movies, audiobooks, and podcasts; creates smart playlists, prints outs CD album covers and song and album lists; plays radio programs, and feeds your iPod with music, movies, and photographs. It does all this, and it’s basically a free program for Mac as well as PC users.

If you’re using iTunes for the first time, and you want to master all its useful features, Judith Stern and Robert Lettieri’s Visual QuickStart Guide: iTunes 6 and iPod is a very good how-to reference book for everything you need to know about using the software and any modern version of the iPod.

Like most books on this subject, they cover all the frequently asked questions:

These and numerous other questions are answered in this easy to follow instructional book. All the step-by-step instructions are accompanied with screen shot illustrations and sidebar tips. There are no wasted paragraphs. Each chapter and subheading is followed by a brief introduction and clear enumerated steps for each feature of the using iTunes and the iPod. The last few chapters cover how to customize your iPod with numerous Apple and third party gadgets and how to use it for more than playing music.

This book covers iTunes up to version 6.0. However, the most recent 6.0.2 update is not so significant that you can’t figure out the added features after using this book. The biggest feature in the latest update is Apple’s inclusion of the MiniStore, a small pop-up window which appears when you at the bottom of your main iTunes window. Because the MiniStore displays songs similar to the one’s you’re playing on your iTunes, many users thought Apple was using it as spyware and keeping data about users’ listening habits and selections. But soon after the update and brouhaha, Apple added a warning that explains the purpose of the MiniStore. It states that “Apple does not keep any information related to the contents of your Library.” You have the option to turn off the MiniStore. 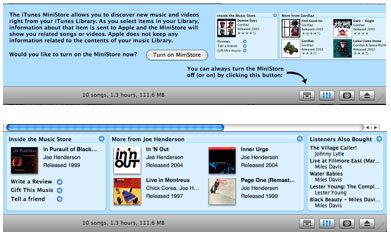 Personally, I like the MiniStore because it’s one of the few ways I can find out what music I might be interested in. It’s like Amazon providing book recommendations. However, it’s also nice to know I can turn off the recommendations when I want to. I don’t like being constantly reminded there are more items for me to purchase.

Overall, iTunes and the iPod in general are very accessible and easy to use, but a handy reference book can quickly get you up to speed if you’re new to digital music playing or just want to master every inch of the software and the most popular MP3 player on the planet.