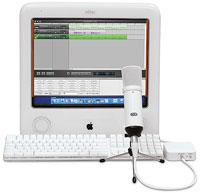 The MyMac.com podcast has been running for over a year now, and as the popularity of the podcasting medium in general grows, those wanting to create their own podcasts increase. So it should come as no surprise that many of the questions I get about the podcast focus on what equipment we use to record our shows. Not on the software side, but about hardware. Specifically, the emails ask the same question: what microphone should they get?

Visiting Podcastrigs.com, I came upon the Desktop Recording Kit (DRK) from MXL Microphones. Intrigued, I contacted the company and asked to review the kit, and after a month of using it, Iâ€™m quite impressed.

The DRK consists of a self-powered professional cardioid condenser XLR microphone, a desktop microphone stand, a XLR microphone cable, a XLR to Mini-Plug Adapter Cable, a 3.5mm Mini-Plug to 1/4-inch adapter, iBooster, and a foam-filled, hard plastic case. Thatâ€™s a lot in one package, and for most podcasters, it will likely be more than enough.

Vocal quality is really what most wanna-be podcasters are looking for when they ask about microphones. Sure, you can pick up a cheap USB microphone or, if you are using a PowerBook, utilize the built-in Mic but neither will sound very good. A lapel mic will sound better, but if you really want that â€œProâ€ sound, you really want a cardioid condenser microphone. All the â€œbigâ€ podcasters use them, from Leo Laporte to Adam Curry. They deliver a deep, rich, natural sound quality to bring that professional sound that we all want and strive for. The problem is picking a good one in your price-range, as well as understanding the tools you will need to get a phantom-power Microphone to work with your Mac.

The microphone that ships with the DRK is a full-sized professional looking microphone, white in color to match the white Macintosh computers, such as an iMac. The sound quality of this microphone is simply fantastic, especially when you look at the price. Cardioid condenser microphones require power to operate, called Phantom Power. The microphone draws its power from the XLR connection, usually from the amplifier itâ€™s plugged into. (Thus the XLR cable both draws power (DC) and sends the audio signal back to the amplifier)

The problem for Macintosh (or PC) users is that you cannot plug an XLR microphone directly into your Macintosh as the Mac (or PC) does not have the ability to deliver the Phantom Power the cardioid condenser microphone requires. For our own podcasts, then, we turned to the M-Audio MobilePre USB to both power the microphones and send the audio signal back to the Macintosh via USB. It works great, but it does make for a cluttered desktop. The microphone that ships as part of the DRK is a little different in that you can also use a MobilePre USB to power it, but hidden inside the microphone is a 9-Volt battery that will deliver the required Phantom Power.

There is an on/off switch on the microphone itself, so that when you are not using it, you can conserve the battery life. To change the battery, itâ€™s a simple matter of unscrewing the body of the microphone and snapping a replacement 9-Volt in.

On three of the four Macs I tested the DRK on, the microphone (using the iBooster) was not â€œseenâ€ by the Mac at all. There is no software with this bundle, thus no drivers for the iBooster. (Again, it plugs into your audio jack, not USB, so no drivers are needed) After hours of trying to get the setup working on Chad Perryâ€™s G5, as well as my own G5 and PowerBook, the only system that it actually worked with was an older G4 of mine. I donâ€™t know if there is a software problem of some sort or what, but nothing I tried worked and no application could â€œseeâ€ the audio input. In an effort to get it working with these machines, I tried plugging the iBooster into a Griffin Technology iMic (which accepts an audio mini-plug and converts it to USB) and it worked perfectly on all four machines.

The small desktop tripod microphone stand works quite well. It does fold up nicely so that you can store and carry it around in the included plastic hard case. The case itself feels very durable, and will hold not only the Microphone and stand, but also the needed wires and adapters. Unfortunately, the iBooster does not fit in the case.

On the weekly MyMac.com Podcast, we had been using one of two cardioid condenser microphones for months. We are happy with these mics, and had no thoughts about using anything else in the near future. We did, however, switch to the DRK cardioid condenser microphone for a few podcasts, and if anything, I think the audio quality for those shows was a little better. I am very impressed with the audio recordings we captured with this microphone.

If you are looking to offer much better vocal quality in your podcast, and donâ€™t want to spend a ton of money, this is definitely the product you want. Cheap only in price and not quality, the Desktop Recording Kit is a real winner. Iâ€™m unsure why it didnâ€™t work on some of my Macs, but with the iMic, the problem was solved. Thus I donâ€™t blame the problem on the DRK itself.