Impossibly small, impossibly fragile?
Have you been seduced yet? Have you been suckered by the fabled â€œreality distortion fieldâ€? I am, of course, talking about the latest, hottest iPod device from Apple – the tiny nano.

I tried to be firm. I caught the presentation that Steve Jobs gave online, and then took a long cold shower and said â€œnoâ€ to myself. I have a 1Gb Shuffle, I just got a Sony PSP and I have a 1GB memory card for that so I shouldn’t need another iPod at the moment. Of course, as soon as I went into an Apple store and handled one, I reacted just the same way as Guy Serle did in his review and all of that went out of the window – I had to have one!

However, here in the UK just after the launch there were only 2Gb models on sale, so I had to wait. And by the time I did get hold of my black 4GB nano, the Internet and press were awash with negative reports of cracked screens and scratched surfaces. While the screen problems were a now-resolved manufacturing fault, what is clear is that the nano attracts scratches like bees to a honey pot! As a result, I did not actually use my nano in anger until I had some protection on it.

Military Grade Technology
The difficulty is that there aren’t a whole lot of cases available for the nano right now. There have been a lot of announcements but not much product has shipped as yet. I have even seen some people resorting to plastic kitchen wrap in an attempt to keep the scratches at bay.

A slightly more 21st-Century variation on the plastic kitchen wrap concept is the InvisibleShield – a skintight, incredibly tough plastic covering developed originally for protecting helicopter blades from chipping. The site has a video showing people abusing this material – you will not believe the punishment this stuff will soak up!

The company sells the film custom-cut for a variety of devices, and I picked up the nano version at a cost of $19.95 plus shipping. Despite my living in the UK, I received the product in less than a week, and I eagerly sat down to apply it to my nano.

For the steady of hand, not the faint of heart
Reviewing the comprehensive instructions provided on the web site, I was mildly disturbed to read that soapy water was involved! You have to wet the film in order to assist lining it up on your iPod’s surface, though this has the side effect of getting the click wheel wet. The instructions advise a 24-hour power down before fitting and use of the hold switch, but nevertheless I was concerned. At least I was, until I caught this article on MacMerc.com – iPod nano vs. washing machine. A guy washed his pants with the nano still in the pocket, and it survived the experience completely unscathed! I guess they are sturdier than we thought! 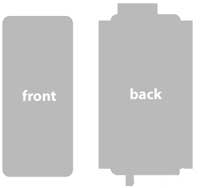 So I went ahead. The shield comes in two parts – one for the front that is a simple rounded off rectangle, and a back piece with tabs to wrap around the sides, top and bottom. The appropriate cutouts are in place to prevent blocking of the ports and hold switch.

The mild wetting with soapy water on the film definitely helped with the positioning, but it still took four or five tries to get it in place properly. However, once I had it, a couple of minutes of smoothing with a cotton cloth got rid of the excess water and a couple of air bubbles. There was quite a lot of speckling under the film surface, but the instructions say that is to be expected from the wet adhesive and that it disappears in 24 hours. Sure enough, after a day or so most of it was gone – what is left looks like dust that I missed while wiping the nano down during installation, and I have decided to live with it.

The back was a bit more fiddly – principally because I was trying to avoid trapping any fingerprints on the mirror surface under the film. The tabs mean that the whole iPod is well covered, with the exception of the corners – which is a bit of a flaw in my mind, as I expect the corners to take the brunt of any drops. It would be a shame to get the corners all marked up while keeping the rest of the unit pristine, as I would think the marked corners would be really obvious.

The good news is that the film is removable – it came off easily while wet for repositioning. Once dry, it can be removed, allegedly with no residue, though the film would be rendered unusable in the process. However, the good news is that the product comes with a lifetime replacement guarantee, so once you have registered in receipt of your product, InvisibleShield will send you out replacements as you wish. This is a nice touch – if you mark the film up in an â€œincident,â€ it will save your iPod’s finish, but you won’t have to live with the scuffed film. They do ask that you return the damaged film after you receive your replacement.

It really is mostly invisible, though – the surface is not the same mirror-smooth as the iPod itself, but you can’t really see the film on. Obviously, the texture is slightly different, with a bit more â€œgiveâ€ than the hard plastic and metal of the iPod, but itâ€™s not unpleasant and offers a superior grip, so hopefully dropping of the unit will be less likely.

Conclusion
As with Guy’s review of the nano itself, I feel that the InvisibleShield is a good product with a few minor flaws. It is quite costly – as much as a decent polycarbonate case will cost when they ship, and while it does offer â€œinvisibleâ€ protection, the lack of coverage for the corners is a real weakness. If youâ€™re really concerned about safeguarding your iPod investment, you may end up buying a case as well as using the shield. Also, the challenge of installation required will put off some customers, I fear.

However, it most certainly will protect the majority of your nano from scratching, allowing you to carry the bare unit around relatively worry-free, and that lifetime replacement guarantee is a sweet deal that goes some way to reducing the pain of the up front cost. Accordingly, I’ll rate the InvisibleShield for iPod nano with a MyMac.com rating of 4 out of 5.