Like many people, I had spent the previous few days glued to the television and news websites, watching the horror that was inflicted upon the Gulf Coast states of the United States. What struck me was just how bad this was going to end for many people. People, who had worked all their adult lives to own a home, fill it with memories, only to see everything lost in just a few moments in time. What was worst, frankly, was seeing the poor and destitute all but left to fend for themselves days after Hurricane Katrina ravaged their cities and homes.

The helplessness I felt was shared by millions of others. I knew there was little I could do outside donating the few dollars I could spare to charity and relief efforts. Somehow, it just did not feel like enough. I wanted to give more than I could afford, but how?

Inspiration came early on the morning of Friday, September 2. Why not contact a bunch of Mac related companies, ask for donations of either hardware or software, and sell them on MyMac.com with all the money going to the relief effort? It sounded simple enough, so I set about early Friday morning contacting companies, getting the website ready, doing a bunch of HTML, and asking other MyMac.comâ€™ers to lend a hand when/if they could.

The response was more than I bargained for. One of the first companies I contacted was Bumbakpaks, a company I had never dealt with before. I did not know them; they did not know me outside an upcoming review of one of their products by our own Owen Rubin. But once contacted, like almost every company I contacted that day, they readily agreed to donate. For Bumbakpak, it was five of their $75 laptop bags, which we sold for $50 a piece, and they sold out almost immediately. (They later donated five more) MacTech Magazine also jumped in with five subscriptions. Thought Out, the iPod stand company, joined in. Then FireWire Depot. Thenâ€¦ the list went on and on.

MyMac.com gets a lot of traffic, a lot of people reading (or listening via our weekly podcast) our content. I was pretty confident that with our traffic, we would do quite well selling the items the companies had donated. Thankfully, those companies without actual products to sell stepped in and posted both news links to our efforts, as well as posting the Mac Users Helping Katrina Victims graphic (top of this page) that Todd Long had created for us on their website. Without their help, we could not have sold as many items as we did, nor raise the money in this time of need.

A few people emailed and asked why I was doing this. In fact, a few websites even went so far as to post opinion articles to the effect that I was simply trying to drive more traffic to our site. Or that perhaps there was some scam that the money we raised would not, in fact, go to the charities we listed. While I do have a thick skin after a decade of doing this, some of this stung me. All I had set out to do was raise money and help those helping the victims of the disaster. While it is true there are unscrupulous people who do prey upon the charity of others in times such as this, I knew our motives were pure, and all I really wanted to do was help. It really is as simple as that.

All the items we sold were done so via PayPal. I had wanted to use eBay, but after posting a half-dozen items on their site, eBay promptly canceled each one, citing that I had to use a third-party to conduct charity sales such as this. The problem was, in my mind, too much control over where the money we raised was spent, how long until they actually dispersed our funds, and asking for a credit card number. The heavy-handed way eBay deals with people was also a concern, so I decided to use PayPal, electronically transfer the money to a savings account, and split the money into two cashier checks for both the Salvation Army and the Red Cross to donate myself, in person.

We ended our auction on Friday, the 9th of September, one week after we began. When we started, I told my wife Julie that I would be pleased if we could raise as much as $500. Anything over that would be better, but not expected. So imagine my surprise when, after totaling up all the sales, we had made $2,047.87 before PayPal fees. I had publicly stated that every dollar spent would go to relief, so I personally paid for each transaction fee, and then rounded up the dollar amount to $2,050 so that we could give both our chosen charity organizations $1.025.00 which Julie and I did on Friday, September 16th.

Below is a list of every company who donated either items to sell, or sites I know that linked to our relief effort. I simply cannot thank these companies and individuals enough, and all the credit for our raising this money should go to them, not to me. Also below are thumbnail links to the documentation of our receipts for the money we gave. Clicking each will bring up a full-size scanned image as proof of where the money went. I feel it is important to publicly account for every penny we raised, which is why the receipts are listed here.

Finally, it should be said that much more needs to be done to help the people affected in this terrible disaster. Hard working people, just like you, lost everything. They still need help. I am posting a link to donate directly to the American Red Cross and the Salvation Army. Regardless of your political, religious, or other opinions or beliefs, know that these two organizations are the true first responders, and they need all the help we can give.

Contributors and thanks to:

Individuals:
David Every, who jumped in and made my HTML actually look decent.
Todd Long, who created our graphic in hours on the busiest day of his workweek.
Chris Seibold, who did much behind the scenes, as well as defending my honor when I had neither the time nor energy to do so.

Stan Flack and MacMinute.com, for generating more traffic our way and keeping our banner online.
Dennis Sellers and Macsimum News, who kept this front and center over a long holiday weekend.
Ross Clark for being so generous.

Ed Sherry for being so generous.
Sean Lee for staying in contact so much and for showing all the enthusiasm in the world for this effort.
Mike Talmadge for his great products and help.

Guy Serle, for his special Dashboard Minute, and not remembering buying something.
Norbert Doerner for his patience and enthusiasm.
Rod McCall for not only donating but also for helping to get the word out.

Paul Kafasis, for keeping on top of the MANY emails I sent his way and his professionalism and charitable heart.
Bill Palmer, for being a better man than some give credit, donating ad space to help in this effort, and being so very encouraging.
Liam Young, the man with the great ideas.

Jared Zelek, for donations and being such a good friend to us.
Neale Monks, for all the help he gave, including donating copies of his great eBook.
Dwayne McDuffie, for the offer to help. The Justice League is in the best of hands.

Neil Ticktin, for keeping me on my toes and staying on top of the email.
Beth Lock for putting us in touch with those willing to give.
Chad Perry, for agreeing to do a special podcast on his day off.

Kim Perry, for letting Chad do a special podcast on his day off.
Julie Robertson, my wife, for being so supportive, encouraging, and loving at a time when it was needed most. 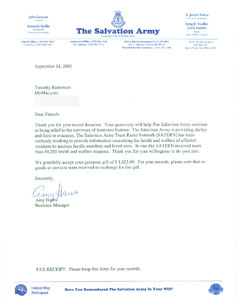