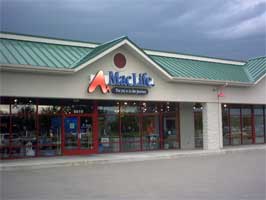 Sometimes the most unexpected things happen when youâ€™re on vacation. Some people look for out of the way cafes that serve a coffee or French wine that is unmatched any-where else that they have been. Others look for unexplored European castles or under-water caverns in the Caribbean. Maybe they take all day setting up their 35-mm camera for that perfect sunset shot off the beach. Me, when I was looking for things to do in Boise, I look for stores that sell Apple Macintosh gear.

I know that might seem a little strange. Spending your vacation looking for retail outlets that sell computer stuff, but look at it this way. I canâ€™t spend 24 hours a day looking for fun things to do with my family. I would be certifiable by the time I got back from my va-cation. Especially considering where Iâ€™m spending the bulk of my vacation this year.

Some people go to the beach, some go to the mountains, Europe, or the islands of the Caribbean. This year, weâ€™re going to visit my mother-in-law in Boise, Idaho. Before you start with all the jokes, let me say this; my Mother-in-law and her husband are wonder-ful, patient, very low key people. All they want is for us to have fun and spend a little time with them. My wife is extremely giving all year (she would have to be considering she has me for a husband) and when vacation plans come up, we have a system. She tells me where we are going and I arrange for it to happen. I get us to the designated vacation area, all in one piece along with my two rambunctious children who have diffi-culty with the words, â€œStop whatever you are doing and behaveâ€. Once we are here, we spend a lot of time together, but occasionally I need a break, and therefore, I look for stores that interest me. Obviously since I write for MyMac.com, the Macintosh platform is one of those interests. 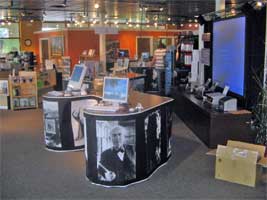 In all my years of traveling, I doubt I would have ever considered Boise, Idaho as a great vacation spot, but there are many interesting things to do in the great baked potato state. Mountain scenery, hot springs, nature trails, lots of summer activities. If youâ€™re into winter sports, Idaho has many tall mountains and ski resorts. There is a thriving artistic community as well and Boise State University. Anytime you have those types of people, you also have Macs. They just seem to go together well. So where can they go for the latest in Mac gear? The nearest Apple Store is in Portland, Oregon many hours away. As in any homogenized community, there are CompUSA stores that will meet your minimum requirements for Mac stuff. But, what if you wanted something a little better? Well, you could drive countless hours to get to Portland, Oregon, or you could go to the store that has been serving the Boise, Idaho/ Northwestern Apple com-munity for quite some time. The storeâ€™s name is MacLife. Their motto is, â€œThe Joy is in the Journeyâ€. The storeâ€™s location is 8610 Overland Road, Boise, Idaho 83709. 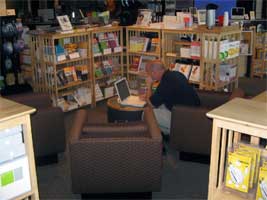 What makes this store so different from the looks of Appleâ€™s stores or CompUSA? Wide open aisles, a big selection of iPod accessories, a knowledgeable sales staff that seems more interested in you getting what you need than making a sale, a pro audio section with microphones, pre-amps, midi keyboards, and guitars all ready to try out. A library with most of what anyone needs, ready to be examined in large comfortable chairs with a cup of free coffee. A classroom where the fundamentals of the iLife suite as well as advanced photo manipulation and video editing classes are taught. A full service and repair department for those rare occasions when your Mac goes south on you. 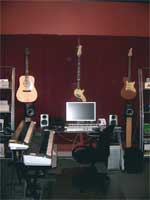 Like any company branded Apple Store I have ever been to, MacLife has a full series of desktop computers, displays, printers, and various other computer and audio hardware all set-up and ready to try. No frozen screens, or half working hardware to be found.

I spoke briefly with the General Manager, Kelly Kitchens, who said that he considered his greatest asset to be his employees who bring great enthusiasm to the store. I asked him what he thought was his biggest challenge with so much uncertainty in the Mac world today. He laughed and said that he really wasnâ€™t that concerned about the Intel changeover. He believes the switch to be the first shot in what could be the renewal of the OS wars with people able to compare different operating systems all running on es-sentially the same hardware. 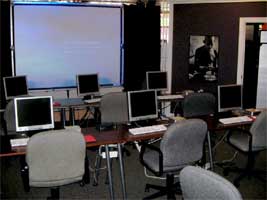 Being the manager of a retail establishment means that he didnâ€™t have a lot of time to spend with some big goofy guy (um, thatâ€™s me) asking questions. So he delegated that task to one of his top salesmen, Ken Scherer. Ken answered all my inquiries.

He showed me the classroom where six Mac minis were set up. Each had a full 1 Gb of RAM for better performance. He also took me through the repair shop where at least 10 Macs of various vintages were awaiting repair from their trained technicians. While he was happy there was no Apple Store close by, he admitted that they were constantly changing the store to meet any future challenge if one should open nearby. Ken is an old timer as far as Apple products go. He started with an Apple II + back in 1979 and his first Macintosh was a Performa 630. Several times while we were talking, he would have to quickly take a telephone call or stop to answer a customerâ€™s inquiry. While I was there, several customers came in with various Macintosh or iPod related questions and needs, and not one of them went away without the exact product required or question unanswered. Many others came in and perused the book section, sitting down in one of the several chairs and reading one of the many Mac or iPod related books on display. They didnâ€™t all make purchases, but you can bet they would be back. 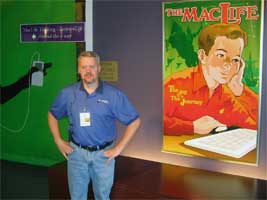 The oddest question came from a young man accompanied by his obviously less than knowledgeable mother asking whether he could hook up his PS2 video output through a Mac mini to an Apple display. Ken didnâ€™t bat an eye. He explained in simple terms that while it was possible through various third party devices (he described the gear in question along with all associated costs, and also explained possible latency issues, very important in most fast reaction type video games), the expense of doing so would most likely be far more than it was worth. No hard sell, no trying to browbeat a customer to make a buy without them knowing the full price, just the facts.

Customer service is one of the most important qualifications of a retail store and while it may be lacking in many other places, MacLife has it in spades. If you live in the North-west part of the US and find meager pickings in the quantity or quality of your local Ap-ple related retail outlets, do a google or mapquest for the MacLife store in Boise, Idaho. Youâ€™ll be pleasantly surprised at what you find.