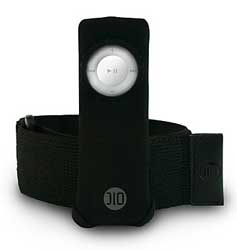 There was one primary reason that I finally joined the iPod craze and bought myself an iPod Shuffle. I run. Three or four times a week, I run 2 miles, sometimes a bit more if I’m really on a good run day. The reason that I wanted an iPod was that I was tired of carrying my portable digital CD player or my “sport” portable tape cassette player or wearing the headphone radio that I constantly had to turn my head sideways to get a station that I could listen to somewhat clearly while I was running.

With the iPod, I knew that running was going to be definitely more pleasant. So when I bought the Shuffle, I also bought Apple’s Armband, figuring that would work out great. Well, maybe if I wasn’t running so much, maybe it would. I constantly had to adjust the armband as it just didn’t fit tight enough, at least without me cutting off the circulation in my arm. If I wore a T-shirt and had it over the sleeve, it kept slipping down on me. Not really the way to enjoy a run, besides I began to think it was designed more as a formal piece of gear, maybe it was more useful if I was doing a stationary bike.

Digital Lifestyle Outfitters’ DLO Action Jacket for the iPod Shuffle to the rescue. The padded soft neoprene case really protects your iPod during any type of activity and the workout-ready armband fits any arm size. The iPod case has a rotating belt clip that securely attaches the shuffle anywhere and it rotates a full 180 degrees for perfect positioning on your belt or pocket. A clear vinyl screen covers and protects the iPod controls from dirt and sweat while you’re wearing it.

I decided that I was going to give the Action Jacket a complete workout. Running with the AJ, not a problem at all. On top of a T-shirt or on a bare arm, the flexible band kept the Shuttle in place. Working out with the AJ on, free weights or flexing, again not a problem. Working, as in I spent 4 weekends digging post holes for a new fence I was putting in, the AJ held its own. If it was cloudy, the Shuttle was on my arm. If it was hot and sunny, I slipped the case off of the armband and clipped it onto my belt. During all this time, the armband never slipped and the clip on the belt kept it secured. Another great thing, the neoprene case kept the iPod nice and dry and clean. Any dirt on the case quickly wiped off. With the clear vinyl screen, one is still able to control the iPod and yet keep it clean. Nothing broke, bent or failed to work.

The downside- Once the Shuffle is in the case, it’s a bear to take it out just to turn it off or on. There is no ready access to the back of the unit, you have to physically remove the unit from the neoprene case to work with the unit. I would wind up undoing the bottom Velcro keeper and push the Shuffle down from the outside top of the case until the unit was at the point that I could readily grab it and pull it all the way out. The neoprene makes it the same as though the Shuffle was in a wet suit. Nothing is going to get to the unit to make it dirty, not with this case.

While some users may find that a turn off, I’d rather have it kept secure, clean and safe. Do yourself a favor- don’t bother with getting Apple’s armband, unless you’re not that active physically. Grab yourself a DLO Action Jacket instead and enjoy your workouts.