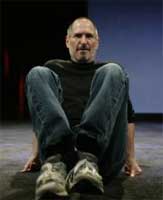 BREAKING NEWS – Cupertino CA. Renown Pixar and Apple executive and seminal industry leader Steve Jobs announced his intention to leave it all and quit the business this morning. “Pixar is doing fine. Disney is doing well. Apple – well I cannot stay ahead of things forever. Even I run out of new things to do after a while. We’ve had a hell of a good run. But I have decided to do something else. As for Apple, I have decided to sell the company to my good friend, William Henry Gates. I know that he is the one man who will ensure the continuation of Apple Corporation and the best that it does.”

Stocks of both Pixar (PIXR) and Apple (AAPL) are mixed right now.
Microsoft (MSFT) gained 200 points just minutes after the surprise announcement by Mr. Jobs. Since Pixar has been bought by Disney (DIS), it does not seem to be as affected by this news as Apple is. Speculation has already started about what might eventually happen to Apple’s prime collateral holdings, such as their OS X operating system, the Macintosh, iTunes, and the iPod as well as their wildly popular iPhone. It is very possible that OS X may well become the new Windows OS, and Safari may even replace Internet Explorer, but what of Apple’s most excellent hardware?

As for Apple’s hardware side, it is well known that neither Microsoft nor anyone else in the industry would be sad if that side of Apple just went away. Apple’s excellent hardware has always been too much competition to the rest of the computer and personal entertainment product industry. Microsoft’s Zune, for instance, would likely benefit from the iPod’s operating system and software, but since Microsoft already is heavily invested in their own hardware, Apple’s stuff would definitely be out the door. Mr. Gates has already indicated that he will continue to support all existing Apple products, but he has not even had time to begin to think about any new products or software as of yet.

What will the world look like, now that Apple is to be taken over by
Mr. Gates? We cannot begin to imagine. We here at MyMac.com are
already missing the Reality Distortion Field.