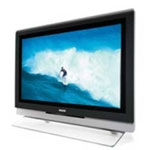 Plasma TV, LCD TV, CRT (aka direct view), HDTV, Digital TV etc. There are so many acronyms and so much chatter about TV these days it can get very confusing. The average Joe doesn’t care about all the standards, the competing technologies (Plasma -vs- LCD) all they want to know is: How does any particular model stack up? Today let us run the 42″ Phillips Ambilight through its paces.

It is generally a good idea to start at the beginning and, in this case, the beginning is the packaging. The Ambilight comes surrounded in heavy foam and seems more than adequately protected. Upon opening the box you’ll find another (obviously) smaller box containing the stand, mounting brackets, the remote and an assortment of cables. Remove that from the box along with a few pieces of foam and you’re in flat screen nirvana. Well you would be if you could figure a way to get the thing out of the box. If you’ve looked at the warnings you know two things: Thou shalt not touch the screen and Thou shalt not lay the TV flat. So just how do you get the thing out of the box without destroying the original packaging? First get a buddy (I recruited my neighbor) and use the wall mounting brackets to lift the television straight out of the box. At this point I should note that the TV only weighs 92 pounds but, for some reason, it feels like a lot more.

Inspection reveals a plethora of inputs. You’ve got two fully complemented component inputs on the bottom, and HDMI input (High Definition Multimedia Input), the typical cable jack, on the side of the television you’ll find the more typical three plug AV input. Further inspection will reveal S video inputs and audio out. In short the Ambilight has plenty of connectivity.

After you’ve inspected the TV and marveled at the thinness of the screen (less than four inches thick) you’ll probably turn your attention to where you’re going to put the thing. This something best considered before delivery as moving the TV without touching the screen is tricky to say the least. Phillips provides three choices in the box. You can opt to use the included glass and aluminum stand. The stand looks very nice and is remarkably stable. Your second option is direct wall mounting. For this Phillips provides brackets with mounting holes spaced the predictable sixteen inches (use a stud finder on the wall). If neither of those options are appealing you can use the included kit to mount the TV to a VESA arm. You’ll need your own VESA arm but Phillips thoughtfully provides all the other hardware.

Once the TV is in place we can move on to what everyone really cares about: using the thing. The first thing you’ll note when you turn the TV on is the remote, it matches the Ambilight and has a high quality feel. The first thing you’ll notice about the picture once the TV is turned on is that it is uniformly awful. Before you become too dismayed you need to step back from the TV to a distance of eight feet or so. The picture will still look worse than TV it is replacing (in my case a 27″ nothing special Magnavox) but the images will at least be passable. The reason the Ambilight looked so bad in comparison to the TV was replacing is due to two factors: The old television was smaller and hence had a sharper image and because the factory presets were a little off. Once you adjust the Ambilight the picture looks much better. Not as good as a direct view television but certainly acceptable.

Of course the Ambilight is a high definition screen so to really get an idea of how good it can be you need to give it a HD signal. Let me turn momentarily to pure geekery: The AmbiLight is a 1080i television. It features a 1920x1080i resolution and is thus capable of displaying (I think, things get fuzzy here) the highest agreed upon quality of HDTV. (HDTV varies from a high of 1080i to a low of 780p, there are some sets capable of 1080p but since this is not part of the standard the utility is questionable). Vagaries of HDTV aside once you get an HDTV signal into the AmbiLight the results are stunning. The picture looks fantastic. The quality of the picture is difficult to adequately convey but, without exception, everyone who has seen the AmbiLight displaying an HD signal has become mesmerized. Colors are bright and vivid while blacks are truly black.A recent trip to the local Best Buy revealed that the AmbiLight had a noticeably sharper picture than most of the Plasma and LCD TV’s surrounding it. Keep in mind objective ratings of the picture have just left the building and any pronouncements made by a quick stroll through the TV section of an electronics store are very subjective.

There is more to a TV than simply picture quality. Audio must also be considered and here the Ambilight’s performance is not as amazing. That is not to say that the audio isn’t adequate because it certainly is. The Ambilight features four speakers and employs Dolby Virtual surround Sound. Still you’ll be happier if you wire a set of decent speakers to the television and that no problem owing to the left right and center speaker outputs. The other things that make the TV more than a simple monitor are well done. There are a set of minimal controls on the side of the television allowing access to volume, power and the menu. The menu provides loads of control over the picture quality, resolution with plenty of gimmicks thrown in (pixel plus, color enhancement) and plenty of really useful controls. You’ll find no less than seven picture formats but “automatic” works fairly flawlessly. You’ll also find an equalizer for sound and a very good picture in picture option (default is a split screen) and an entire control panel devoted to the AmbiLight. Customization of picture and sound are just about unlimited but even with all the options the menu remains intuitive and easy to use.

Let us close the review with a discussion of the Ambilight feature. Ambilight is the name given by Phillips to the two color changing lights found on either side of the television. The lights change hue with the picture or you can choose to control the tones manually. Phillips opted to put lights on the TV owing to scientific studies that indicate a little extra lighting relaxes the eye and makes watching TV easier. I’ll concur with the scientists, the Ambilights actually do make for better viewing but not by much. In my case I am fortunate enough to have to can lights sunk in the ceiling. These provide more light than the Ambilight and make watching the TV much more comfortable. In short the Ambilight is a nice idea but there should be more of it.

Overall I’ll be sad to see the Ambilight head back from whence it came. It is a great piece of technology and truly a pleasure to use. I think Phillips would be well served to add a HDTV receiver to the set along with the dual tuners the Ambilight sports straight out of the box. Other than that there are no real misses on the Ambilight but not any home runs either. While the picture did look simply amazing when a HD signal was being displayed that has as much to do with HD as with the quality of the Ambilight. I don’t think anyone would be disappointed by the performance of the Ambilight but I also doubt anyone would be completely blown away by the performance when comparing the set to equally able plasma TVs.