Okay, letâ€™s see how many people I can piss off with this oneâ€¦

I want to feel proud to be an American again. For as long as I remember, I have been a proud American. But as of late, not so much.

Like all of you, I saw the photos of the prisoners being tortured in Iraq. It made me sick. How could this happen, I wondered, in todayâ€™s day and age?

First, I want to dispel the myth that this was simply â€œinappropriateâ€ behavior, or that this was â€œabuse.â€ This goes beyond abuse, and falls squarely in the torture category. Defense Secretary Donald H. Rumsfeld has publicly objected to the term torture, as everyone knew he would. But what is this, then?

If Americans were shown in Iraq bound, gagged, nude, and put in homosexual poses in an effort to divulge information, President Bush would have been before the world declaring Saddam was spitting on the Geneva convention rules of prisoners-of-war rights. But when it is Americans doing the same thing? Well, okay, it is not the same thing. The â€œdetaineesâ€ in Iraq are not prisoners-of-war at all. They have not, in fact, been given a trial, or convicted of anything. They have no rights to a lawyer. They have not been charged with anything. American soldiers have simply rounded them up. Perhaps they were captured during anti-American demonstrations. Some are simply suspects, or those who may have information that could lead to other â€œbad guys.â€

We read about prisoner abuses in Guantanamo Bay, Cuba, but most Americans have, for the most part, ignored those stories. We simply ignored them, figuring that much of them were made-up stories to give us a black eye by those there, in retaliation for being captured. The US media has not really covered or investigated these stories to any great lengths, thus most Americans are unaware of what has gone on in Guantanamo Bay.

I want to feel proud, but of what? Our actions in Iraq? What have we accomplished there? We are torturing Iraqâ€™s citizens. The administrations originally gave us vague references to al-Qaeda as a reason to invade. When that did not work, they used Weapons of Mass Destruction to argue we needed to take out Saddam and create a free Iraq. When that, too, was proven to be false, the President used the tried and true Humanitarian argument to justify a war he had started all on his own, even going so far as to declare the â€œtorture roomsâ€ were closed.

Now who is doing the torturing? I donâ€™t see al-Qaeda agents in those pictures. I donâ€™t see Saddamâ€™s sons there. I see American men and women, posing with thumbs-up signs, laughing and having a good time while proudly showing their American colors. Which, somehow, now includes torture.

Where did we go wrong as a nation?

I am spitting mad. Our government is not acting for the people, of the people, by the people at all. Those troops we all saw in those pictures torturing Iraq detainees are no better than the terrorists they were called upon to fight. Their actions dirty us all, and I for one want to see serious consequences for their actions. I want to see twenty-year prison sentences for these people, the men and women. I want to see their commanding officers, who allowed this to happen, go to jail as well. I want to hear the President promise that this will never happen again, and to take responsibility for the actions of the troops under his command.

Proud to be American? How so?

We, the public, have sat here and allowed our religious fanatic President to invade a foreign country, lying about his reasons for doing so. We have watched our armed forces torture detainees in Iraq, and pose with them, proud of their own horrific actions. We have allowed the justice department unprecedented power to curtail our own freedoms as Americans. We have watched this administration use our Constitution as if it were a roll of toilet paper.

And we have done nothing!

Proud? Hell, I am ashamed right now. Ashamed that the average American citizen is fat, stupid, and too damn lazy to give a real crap about what our nation is doing in the rest of the world, as well as what is going on right here at home. More people were talking about the last episode of Friends today rather than how our own soldiers are torturing foreigners. More people are following the Wacko Jacko story than the ill-named Patriot Act that is a slap in the face of all our Constitution upholds and represents.

Proud? Are YOU proud right now? We, the American people, need to change our national image. Get rid of the Eagle, and adopt the NEW symbol of America! 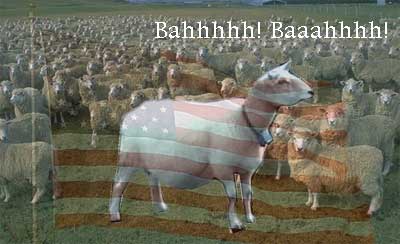 I WANT to be proud of my country, damn it!