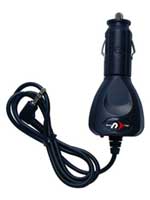 If you are an iPod owner, you probably want to be able to listen to your iPod in the car. It is a perfect fit, really. Unfortunately, Apple does not have an easy, built-in solution. So the after market is afloat with add-ons which will allow you to connect your iPod to your car stereo, or at the least, transmit the audio to your cars radio. The later are called “FM Transmitter” because that is just what they do, they transmit the audio coming from your iPod to a radio signal that can be picked up and played over your cars radio.

The Newer Technology RoadTrip! is the latest product to enter the foray. Without knowing what it is, the RoadTrip! looks more like a car cigarette adapter of some sort. It plugs into your cigarette lighter for power, so there are no batteries required. There are two models, both essentially the same, but they broadcast over different frequencies, 87.7MHz or 107.7MHz. For this review, I looked at both.

First up was the 107.7MHz model. I was most curious to test this unit as we have a very powerful radio station in the area, running I believe at 50,000 Watts, which comes in very clear on 107.7. How would the RoadTrip! handle such a powerful competitor for that radio band? Initial tests were not good. Once you plug the RoadTrip! in, it becomes a mini-radio station. I immediately noticed even before turning the iPod on that the RoadTrip! acted as a jamming device for the local 107.7 radio station. I could still hear the station, albeit faintly, but it was still there. Turning on the iPod to play over it worked, but it became a battle for the dial. Depending on my location while driving around town, I would either hear the iPod better or the radio station. Regardless, this is no way to enjoy listening to your iPod in the car. So if you have a powerful radio station at 107.7, and are planning on purchasing a RoadTrip!, I suggest you make sure you buy the other unit.

The other unit is the 87.7MHz model. Identical in every respect to the 107.7 models, it uses a frequently less used FM band. In my area, there was no radio station at all on 87.7, so this was a much better choice for me, and an opportunity to see how well the RoadTrip! actually work.

To connect your iPod to the RoadTrip!, you simply plug the end of the RoadTrip! cord into the headphone jack of your iPod, or any other MP3 player for that matter. Once it is connected to the iPod, and your cigarette lighter, you are ready. Turn your radio to the station (in this case, 87.7) and your iPods music will be playing.

The range of the RoadTrip! is not great. For instance, if you are on a roadtrip with multiple cars, the other vehicles will not pick up the signal. This is for the car it is in only. Testing the RoadTrip! in multiple vehicles, I have found that it either works extremely well, or very poorly. For instance, in my Pontiac, it did not work at all as my aftermarket car audio unit would not go to 87.7. Strange. In the wife’s Taurus, which does pick up that frequency, it worked fine. I was able to hear it with no interference. I also tested it in a friends Dodge, and while it worked, it was hit and miss. At times it came in fine, but other times the radio was more static that music. All three cars had rear-mount antennas, so perhaps a car or truck with an antenna in the front of the vehicle would result in better clarity.

For twenty-bucks, the RoadTrip! is a great value. If it works in your vehicle, that is. It should, but my testing was inconclusive. Rating this is not easy, as there were good and bad days using the RoadTrip!, and when it worked, it worked fine. When it didn’t, it was very frustrating.

The sound quality, even when working, is not all that great. A problem with the RoadTrip! itself? No. I have tested a few FM Transmitters, and they all suffer from the same problem: a small FM transmission on the road does not produce quality sound. The only way to get the quality you really want in your car from your iPod is to connect it directly to your car stereo, but those kits are still expensive. Until the price of that solution comes down drastically, and you don’t want to wait, this is a fine solution. It works, but it is not the best sound. Does the low price offset that? I believe so. The RoadTrip! is cheaper than most other FM Transmitters on the market today, it is a no-brainer to use and connect, and it does work.