In May of 1997, Apple Computer Inc. released a dream machine, the 20th Anniversary Macintosh. The name, however, was a bit of a misnomer. 1997 was not a celebration of twenty years of the Macintosh, but rather the twenty-year anniversary of Apple Computers. Apple was formed in 1977, and to celebrate, Apple released a machine with a machine with a $7,500 price tag. Ouch!

The machine, while impressive for its day, is not even capable of running Mac OS X today. However, it still holds a special place for true Mac aficionados, including this writer! (On a side note, I have been chasing them on eBay for the past two years, trying to pick up a working model on the cheap. So far, no such luck.)

What did the Twentieth Anniversary Macintosh (TAM from here on out) sport that made it so noteworthy? First, it was an all-in-one machine built around a 250Mhz 603e PPC Motorola microprocessor, and a 12.1â€ LCD flat screen monitor, typically found in the PowerBooks of the day. Whatâ€™s more, it shipped with a great sounding speaker system (two speakers and a bass unit) made specifically for Apple from Bose.

The real twenty-year anniversary of the Macintosh, however, came this year, 2004. The original Mac (now known as the 128k Mac, of which I actually own two! Anyone with a TAM wanna trade?) was released in 1984. There was no special edition Macintosh created to celebrate the passage of this monumental achievement. Or was there?

I donâ€™t think it any real surprise that the all-new, all-in-one iMac was released in 2004. Hailed as a first of its kind, the all-in-one iMac sports a complete computer system built around a G5 IBM microprocessor, with a flat-panel 17â€ or 20â€ screen.

The similarities of the new iMac and the 1997 TAM are surprisingly overlooked by most tech writers, so letâ€™s take a look at these two systems, side by side, and see if we can glean any significance therein.

First, Apple made great strides to create a form-factor that had a very small footprint on your desktop. 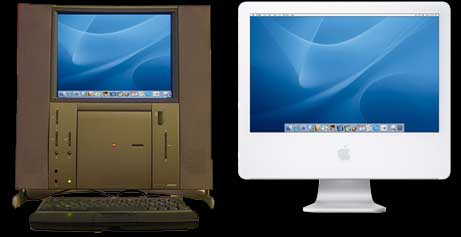 As you can see in this picture, the keyboard on the TAM is actually more like a PowerBook keyboard, with a trackpad and all. In fact, it would probably be fair to say that the TAM is a PowerBook standing up, but with the guts of the fastest PowerMac of its day. It also sported a TV Tuner, meaning you could watch your favorite television show on your TAM,

The iMac G5, on the other hand, takes even less space on the desktop, with only its metal stand touching. The iMac keyboard is a standard Apple OEM, the same that ships with the PowerMac G5.

This side by side comparison shows just how similar the TAM and iMac G5 really are, and yet how different. On both units, there is a lot of plastic real estate underneath the screen. On the iMac that is where much of the actual computer is located, while on the TAM that space is given over to the CD-ROM and control buttons. Note how there are NO buttons visible on the front of the iMac. Even the power button is located on the back of the iMac. There are also no headphone jack, USB port, or any other features on the front of the iMac. Everything is in back. The TAM has all the cables running behind it as well. 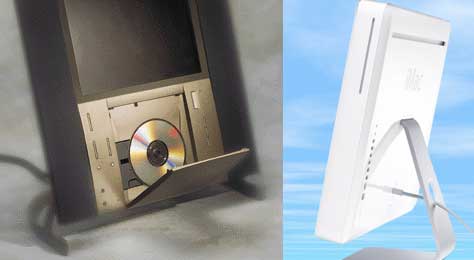 Apple has taken great steps to eliminate a CD-ROM drawer on the new iMac, opting for the same type of solution found on their portable line of computers. With the iMac, you simply slide the CD (or DVD) into the side-mounted slot on the right side of the unit. Without actually having seen one yet up close and personal, I would imagine that this would be a pain. Once youâ€™ve gotten used to the placement, it should be no problem. But for the first few months, every time you need to insert a disc, youâ€™ll have to peek around the side of the machine to get it lined up and inserted.

I much rather prefer the more futuristic and high-tech look the TAM sports. A tray simply folds down, and you pop your CD right in. A very elegant arrangement, in my opinion.

It would really be unfair to compare technical specifications between a brand-new iMac and a seven-year-old PowerMac. They are simply too far apart tech-wise to do so. Technology has advanced so much in the past seven years, from ports (USB, FireWire, etc) to processors, to operating systems.

It is worth pointing out, however, just how much more real screen space you get on the new wide-screen format monitors. Hopefully, the days of square monitor screens are over!

All in all, I think that the new iMac G5, bearing a similar form factor to the TAM, could easily be called REAL 20th Anniversary Macintosh. My only wish is that it came in black, silver, or brushed metal!