Apple makes cool tech. While this is no surprise to anyone who follows the various goings on in Cupertino, there is a whole world of techie feely things happening out there! In a moment, Iâ€™ll talk about one.

Apple makes and sells iPods. These nifty devices play music. They also allow for portable storage from 4 to 40 gigs. With the right add-ons, they also record voice and accessorize BMWs. An entire industry has arisen to give iPod fanatics just about every type of widget imaginable. Well, except for one area. Video.

Ever since the iPod came out, people have clamored for a similar device for video. Some companies have actually gone out and created gadgets for people to easily take their videos with them. They are typically some sort of combo DVD player with a 4 to 10 inch screen. These work well, but you must take your DVDs with you and battery life has been somewhatchallenged. A decent one from a major maker with at least a 7-inch screen runs in the neighborhood of $300-700 dollars. You can use a laptop computer (Mac/Windows/Linux) and have a great big screen (12-17 inches) with no need to take your DVDs (unless they have some kind of Orwellian copy protection scheme), but that also takes up a lot of room. Laptops capable of running video on the Mac side run from $699 (for a G3 iBook) to $3k plus (for a 17 inch G4 PowerBook). What is missing from most of these solutions is a device that allows you to play video, have a decent looking screen, not take up a lot of room, be reasonably priced, and not force you to carry a bunch of disks around.

So there is a need. Based on the amount of portable (hand-held or car based) video devices released in the last few years, there is a market. So, you can either hope against hope for Apple to engineer and sell a video iPod (donâ€™t hold your breath), or wait until someone creates one that possibly does what an Apple branded gizmo might do. How much would you pay for a device with a 7 inch 16:9 (720 X 480) based high-resolution screen. A device that plays MPEG-4, DivX, wmv, and QuickTime video files. A device that is desktop mountable with a USB 2 connection. A device with a built-in 20 gig hard drive. A device that also plays MP3 and WMA audio files. Displays JPEG, BMP, and GIF files. NOW how much would you pay? WAIT! Thereâ€™s more! What if this device was also a portable Digital Video Recorder (DVR)? Based on what Iâ€™ve been reading, someone might already have one ready. 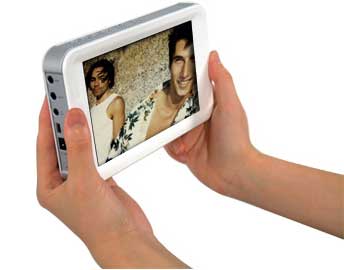 A Taiwanese company named MobiNote has a device out right now that is essentially a Windows CE tablet computer. Why is this important? Well, to Mac users it isnâ€™t. Itâ€™s another product that is being developed by this company that caught my eye. Its name? The MobiNote DVX-Pod 7010. Itâ€™s even comparable to what an Apple Video iPod might look like. Besides being a portable video device, it also allows you to hook up through your cable box or television (PAL or NTSC) to record your favorite programs or movies. It has a 7-inch screen for viewing videos or pictures located in its internal 20 gig hard drive. According to the literature, it can hold 30 MPEG-4 films (nothing said about the lengths of the film), 5000 MP-3s, or 20,000 pictures (BMP, JPEG, or GIF compressed). It can be a portable drive connected through a USB-2 (or USB 1.1 if you have a LOT of spare time). No FireWire connectivity at this time. 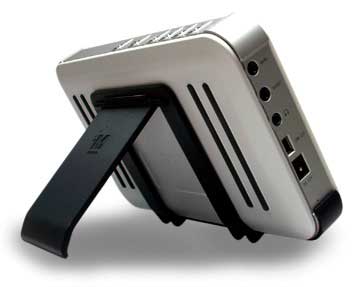 Its controls and connections are located along the sides and top of the unit. It also has its own screen based O/S that is navigated through what MobiNote calls a â€œFly-Rollâ€ button. Probably similar to the little nubs that Windows based laptops used to use. Pictures also show a triangular stand for the player to sit in for hands free use. The product literature I have received points to a AV-in port that allows direct recording from a Television, VCR, or DVD player. The unit encodes it as MPEG-4 files onto the built-in 20 gig hard drive. I donâ€™t know what options are available for programming DVR functions (setting times to record and stop and the like). I also donâ€™t know what the operating system looks like, as I havenâ€™t played with one yet. I have been told by company representatives that it is NOT Windows CE based. According to these same reps, it is an in-house developed O/S. Apparently this has been produced apart from the PMP based audio/video devices most commonly known now. One big advantage that the MobiNote DVX-Pod 7010 has over these other units is screen size. Most of the PMP based players I have seen have relatively small (3-5 inch) screens. The DVX-Pod 7010 has a 7-inch screen. When youâ€™re talking movies, bigger is better. Iâ€™m hoping I can get one to put through its paces sometime in July. 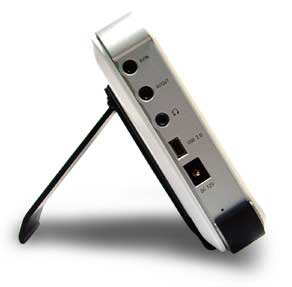 What exactly will the unit come with besides the player itself? A built-in Li-polymer battery for video on the go. No word on battery life. Hopefully in the 3-4 hour range. An power adapter for recharging or using on external power. A headset for listening in private and the AV cables necessary to connect to a TV or video player to record or view on external monitors.

So if you have been waiting for Apple to make a video iPod, maybe your wait is over. The estimated cost of the DVX-Pod according to the manufacturer will be between $599-699. Considering everything MobiNote claims this device will do, this is a pretty good price. Will it live up to the hype? Time will tell.