A funny thing happened on the way to the MyMac.com Garage Band Loops Contest. Tim Robertson, owner and publisher of MyMac.com, was monitoring the contest when he noticed that quite a few of the entries for the Garage Band Loops contest were coming from the same email address, and that this Kathy Lies was submitting quite a few entries. Upon closer examination, he noticed that she would put that this entry was from this person and the next email, from another person.

His interest aroused, he wondered what was going on with these different entries for different people but under one email address. Ms. Lies signature file also mentioned the Wayne Country Day School in Goldsboro, NC. Contacting Ms. Lies to make sure that everything was within the guidelines of the contest, Tim discovered that Ms. Kathy Lies is a teacher and that she had made our Garage Band Loops contest a class project!

Both Tim and I had the pleasure of interviewing Kathy Lies to get the story behind the Wayne Country Day School â€“ My Mac Garage Band Loops contest class project. So sit back, relax and enjoy as we find out how Macs are being used in the school and a different way of involving students in class projects using a web-based contest came into being. 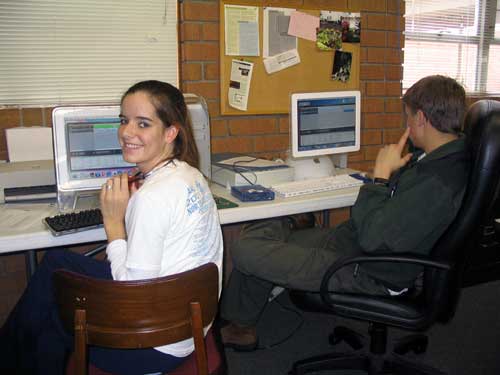 MyMac.com: Kathy, welcome to My Mac! Could you describe the class (es) that participated in the contest? What specific class was it? 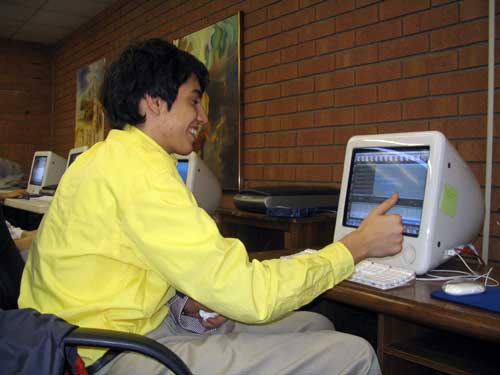 MyMac.com: How did you find out about My Mac’s GarageBand Loops contest?

Kathy Lies: A very good friend came across it and emailed it to me!

MyMac.com: You must be a fun teacher to let your students create music in class. What do you see as the benefit in this exercise?

Kathy Lies: I have found that my students generally learn best when they are trying out things for themselves. If I try and “lecture” to them, they tune out- I simply told them about the contest and let them go- they learned everything on their own. Some students became much more adept at finding all the extras, and they taught the others. If they learn things on their own, they will continue to do so, long after they have graduated. 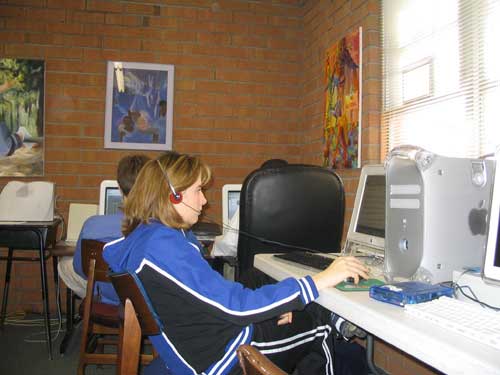 MyMac.com: How long have you been teaching computer science at the school?

Kathy Lies: This is my 7th year. I began by volunteering with the Accelerated Reader program around 10 years ago, and was hired to teach part time. I taught kindergarten many many years ago, then went to law school, practiced part time while my children were very small, then as I began volunteering while they were in elementary school, I found I missed
teaching. 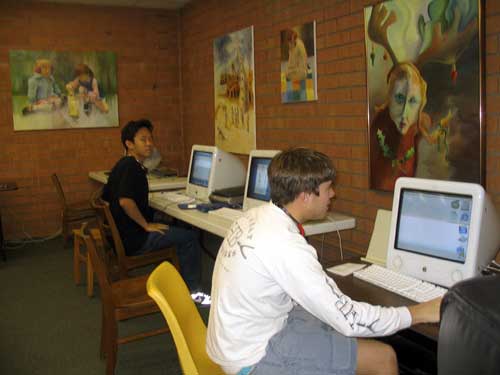 MyMac.com: GarageBand is an easy program to learn. How much of a learning curve was there for the students to learn?

Kathy Lies: Practically none- they were off and running immediately!

MyMac.com: Any future plans for GarageBand in the classroom?

Kathy Lies: I’m not sure. I could see letting them arrange some of the loops to use as background for a lot of things. They each got to burn a CD of their work to take with them. I did buy myself one of the Keystation 49e keyboards, and I may bring it in later and let them work with it. I also bought the new Finale for myself, and may let them try it with my keyboard. 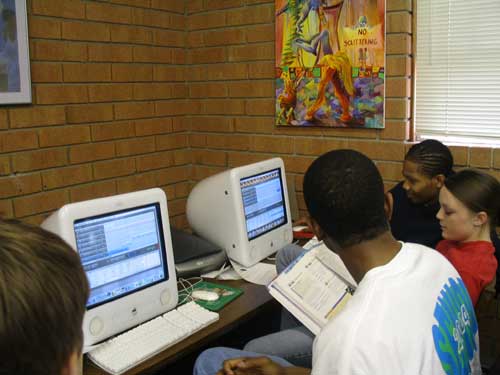 MyMac.com: Obviously winning the contest was not the focus for you or the class, but rather teaching was. True?

Kathy Lies: : True, although I told them if they did win, and didn’t need the hard drive, we could certainly use the donation to the school! 😉

MyMac.com: The class looks to be teeming with Apple Macintosh computers, from eMacs to G4 to iMacs. I take it your school district has not gone over to the Windows camp, as have many others. Any reason why?

Kathy Lies: First of all, we are not a district- just a small private school. It is pre-K through 12th grade. There is a technology committee working to get new funding for the school right now- there are old PC’s scattered about, and this year I leased 17 new eMacs to place throughout the school. Each lower school class has one, and several upper school classes.

I have had a least one convert from the Dark Side! I use Macs in my lab because I prefer them. They are easier, better for graphics, Multimedia- hey, you know all this! – and easier to maintain. I am the only computer person in the school, and I only work part-time. 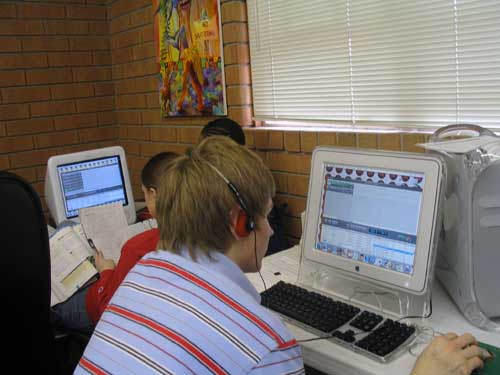 MyMac.com: Are you encountering any resistance to the use of Macs at the school?

Kathy Lies: Of course. There are a few who have never used Macs and haven’t seen the light- and then there are several who are willing to learn- they have seen the eMacs in the lab. And of course, we have gotten at least one convert!

MyMac.com: Besides GarageBand, what other applications do the students learn to use?

Kathy Lies: We use Office, which I teach in Computer Lit I, and AppleWorks (easier to use for databases), Photoshop, Dreamweaver, iPhoto, iMovie, iDVD, iTunes, and even iChat- I can send them messages while they are working without anyone else hearing me! and of course, Internet.

MyMac.com: What has been the most popular project done this year?

Kathy Lies: GarageBand, no doubt! Usually the most popular one is with iMovie. They LOVE bringing in pictures, scanning them and making presentations and movies with them. They also use the digital cameras and camcorder.

MyMac.com: Do the students have Internet access in class? Does the Internet play an important role in day-to-day classroom work?

Kathy Lies: Absolutely- a parent helped me wire the main building last fall, so we are wireless in the main building. We need new wiring desperately, and everything more up to date, but it was amazing what a difference it made in the use of the computers. A lot of the students bring in laptops, and some are wireless. For those who are not, I have a table in the lab with a couple of Ethernet cables. Sometimes classes will come in to do research on the Internet; some will do the research on the computer in their room. 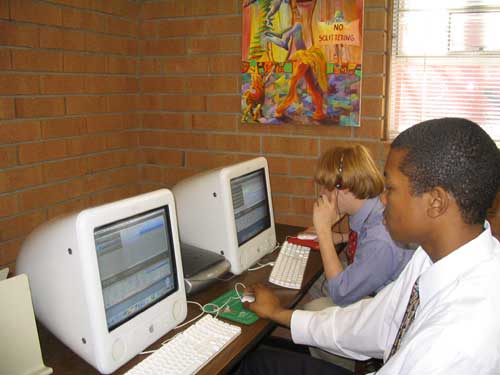 MyMac.com: What type of Mac do you use yourself?

Kathy Lies: I am working on a titanium PowerBook G4. We have an old blue and white G3 desktop which serves as a print center. My older daughter, who is in grad school, has a 12″ iBook, her fiancÃ©e has my old G3 bronze keyboard PowerBook, my younger daughter, a sophomore in college, has a 14″ iBook. My husband has an old original PowerBook that he still has to use for Quicken, thanks to their reluctance to update Quicken for Panther. He is sitting with his 15″ iBook now, probably playing Snood.

MyMac.com: You are deeply involved with the use of Apple computers in your job as a teacher. What would you like to see Apple or a third party vendor produce for use in classroom or just for home use by a Mac user?

Kathy Lies: I would like to see more programs updated for Panther. My husbandâ€™s data files from his old Quicken will not transfer-the information just disappears. Some programs I used to use for school, like HyperStudio, for example, have not been updated for Panther, either. That was a really good program, and was good for showing similarity to making links, like websites. I am still waiting for the PowerBook G5, although it is just as well that it hasn’t come out yet- I still have a little over a year left on my Applecare!

GarageBand is a really awesome program, but wouldn’t it be great if they could make an inexpensive program that would write the notes in as you play them (on a keyboard)? Finale is really expensive. Also, syncing the iPod and iTunes is a bit confusing for some people- one of my students got an iPod and put on 26GB of music! Then he got a virus (unfortunately, he has an old PC, I think) and had to reformat his hard drive. He didn’t realize that the iPod would erase itself in order to sync with the computer, and he lost it all.

MyMac.com: How long have you been a Mac user? What first got you started down the path of using Apple gear?

Kathy Lies: Ever since we got an Apple IIe! My husband brought it home when the children were very small. I was literally afraid to touch it, so he worked the programs for the children. We eventually got a IIGS, and I began using it some. I remember MacWrite, and MacDraw, and one of our favorites, The Learning Center. My children wrote many stories using that program!

Then we bought an LC and I had to learn about the hard drive- and OS 6. I crashed it (by experimenting with it) so many times that I got tired of calling friends or support and started really paying attention to everything they did. Pretty soon I had figured out how to fix a lot of things. We then upgraded to a PowerMac LC, then we got another, although I don’t recall immediately which one it was, and then the G3 desktop. Then we began the laptop route. I got my husband one of the PowerBooks with a 40MB hard drive and 4 MB memory, and I had an original PowerBook. I dropped it, the display cracked, and I had to get a different one- which turned out to be a lemon- most unusual.

Apple was great- though it took a long time, my letter writing finally reached someone in Cupertino, and they not only gave me a new laptop, but an upgraded version- the bronze keyboard! I bought the titanium G4 about a year and a half ago. I am a Mac fan for life, and have converted several friends! 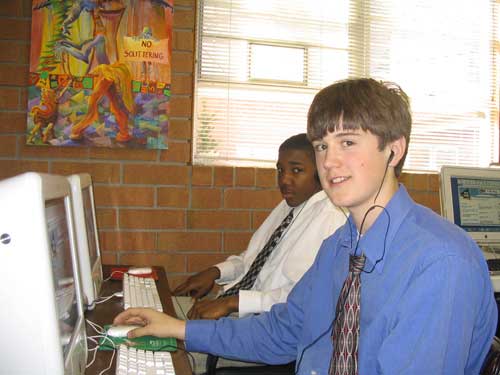 MyMac.com: Kathy, thank you for taking the time to talk with us. Thank you all for participating in My Macâ€™s Garage Band Loops Contest. We wish you, your students and the school continued success in all your endeavors.