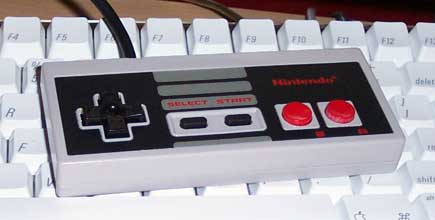 My first home video game system was, not surprisingly, an Atari 2600. I loved that machine, and while PacMan for the 2600 was possibly the worse port of a video game ever, it was what I sat up dreaming about before Christmas day. My love of video games continued, and by the mid-1980â€™s, it was for the Nintendo Entertainment System, or NES. What I really liked about the NES, besides the better and more colorful graphics, was the controller. The NES game pad was a huge improvement over the cruddy joystick that shipped with the Atari units before it.

So I was curious when I came across RetroZone, and its sole proprietor, Brian Parker. What RetroZone does is take the NES controller and convert it to USB, able to work with your Mac or PC with no software needed. Simply plug it in and play your games. For me, that meant I could play all my emulated NES games in RockNES using an original NES controller, rather than a keyboard or number pad.

I was so impressed with this, that rather than do a simple review of the RetroPad USB NES Controller, I decided to bring attention to the creator himself, as I think his idea and entrepreneur spirit is what being a Mac user is really all about. And as an old school video game player, I confess I was more than a little curious to learn more about Brian and his products. Brian graciously agreed to answer some questions in an interview conducted via email in early February 2004. 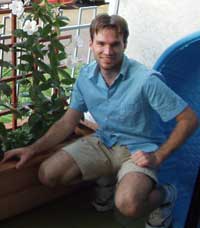 MyMac.com: I understand that you actually build each controller by hand. Can you describe how you do this, and what is involved?

Brian Parker: The first step is the most fun, taking things apart! With the controller in pieces I can wash off the years of dirt. Some that look very old turn out looking new after being cleaned. Next is installing the new circuits. A USB chip I programmed is added to the board and wired up to the existing circuits. I keep as much of the original controller intact as possible so it looks and feels the same. There may be ways to build it with less manual labor, but then it would not be original. When everything is back together I test it on the computer. Windows (aka VirtualPC) has a nice graphical display for the buttons and d-pad to see that itâ€™s working.

MyMac.com: What made you think of converting a NES Controller into a USB model that could work on a Mac and PC?

Brian Parker: In the USB spec there is a standard for Human Interface Devices. That HID standard is basically built-in drivers for devices like keyboards and mice. By using the standards, a device should work on any computer with USB and without writing any drivers. I am a hardware guy so no drivers are a good thing. Of course I am also a Mac guy, so if I had to choose I would have made the controller for Mac first. I don’t ask what OS the buyers have but at least one has had a mac.com email address.

MyMac.com: How long have you been creating these?

Brian Parker: I made the first one sometime in December as a Christmas present for a friend. He and another guy are doing crazy things like beating Zelda without getting the first sword. Many games like Zelda are much better with the real controller than with a keyboard. Some time in mid-January I set up my page to sell them.

MyMac.com: Are there any other video game controllers that you have converted, or plan to?

Brian Parker: Right now I am pretty much done with Genesis and Atari controllers. They aren’t systems I really used, so I don’t know as much about the options. My PowerGlove adapter should be done within a week as well. I have seen quite a few educational sites using the PowerGlove for research such as sign language recognition. I was looking at the Zapper light gun but it doesn’t respond to CRT or LCD screens. Not quite sure why it doesn’t work….

MyMac.com: Which Atari controllers are you working on, the 2600 one-button joystick or another model?

Brian Parker: My adapter will work on the 2600 joystick, and any other controllers that are compatible with it. The Atari 7800, and Commodore 64 also used the same port so they will also work. I can convert pretty much any digital controller quite easily so other controllers are always possible.

MyMac.com: Where do you find the controllers?

Brian Parker: I have gotten controllers almost totally from eBay. I had some trouble at the beginning from controllers not being as good as I was expecting. Controllers that reeked of smoke even after cleaning was another problem. Those were completely useless. I would hate to live in the house they came from. I now know which sellers are good and what to look for in the description.

MyMac.com: Have you sold a lot of these, or just a few?

Brian Parker: I would call it a slow trickle. A few per day, higher on weekends. However I’m not expecting the market to be very large. Of course I always wish there were more orders because I think itâ€™s a great product.

MyMac.com: Is this your full time job, or do you do this in your spare time?

Brian Parker: I am certainly not making enough money for this to be a full time job, although it does take up a lot of time. My wonderful wife is the one that makes the real money as a chemist. After graduating from UC Santa Cruz I haven’t had an official job. Instead I have done a variety of things like making stained glass windows, Newton software, website design, and projects like this one. Hopefully sometime I will have a hardware design job to pay for new toys like a 20″ iMac.

MyMac.com: How many units do you think you would be able to handle working as you do? If the orders started pouring in, would you be able to keep up with demand?

Brian Parker: I can handle many times the demand right now. The only problem would be making I have a constant supply of parts. There are also some things I could do to make assembly faster. Would a controller survive a trip through the dishwasher? If it gets overwhelming I can easily hire some people to help with assembly. Some have already asked for jobs without knowing what they would be getting into.

MyMac.com: Being a hardware guy, have you ever thought of converting other game items, such as a Coleco controller or some such, into a USB Hub or other computer gear?

Brian Parker: My video game experience really started with NES, and has stayed primarily Nintendo so I don’t know much about ColecoVision or similar systems. But all that needs to happen is someone mentioning a project like this and I can tell fairly quickly if it will work. Controllers like Coleco and Intellivision would make interesting phones. Starting to sound like Monster House… I have been thinking of a NES PC www.junkmachine.com These are generally built with x86 mini-atx boards, but a laptop board like the G3 iBook would be much better. Then you wouldn’t need fans or a large power supply. Funding is usually the stopping point of the project, and there is no way I will sacrifice my clamshell iBook.

Many thanks to Brian for taking the time to answer some of my questions.

Now that you have heard of the RetroPad USB NES Controller, and its ingenious creator, you may be asking how the unit actually works. Thankfully, I have one, and am happy to say it works quite well.

The controller feels just like a stock NES unit. I was worried initially that perhaps the buttons would feel different, or that the L-Pad would not work quite the same. My worries were unfounded. The RetroPad USB NES Controller works just like a stock NES controller, which I tested by actually using both this unit and an original. I use RockNES to play emulation NES games, but I do own a working NES as well. Game control on both the original NES and RockNES felt the same using the retrofitted controller and an original.

All said, this is a really neat item. If you like retro gaming as much as I do, this is an easy $25 to spend. If you know someone who is into retro games, this would make a great present.

While this is not really a review, I would have to rate the RetroPad USB NES Controller a perfect 5 out of 5. Real neat idea, well executed, and cool as heck.

For more details, or to order one of these yourself, check out The RetroZone!