I remember seeing the television commercial for the Olympus Stylus camera in which water cascades down a tropic scene, gently splashing the Stylus camera with water. The message, of course, is that the Stylus is weather proof, up to a point, of course. And while I did want to test that out, my main review criteria is the same as it always is when reviewing a digital camera; ease of use, quality of picture, quality of the camera itself, and all the other little things that go into the decision to purchase a camera or not.

Out of the box, I was surprised that the Stylus 400 was smaller than I thought it would be. It’s much smaller than the recently reviewed HP 935, in fact. The Stylus 400 will easily fit into a front-shirt pocket or a purse without a large bulge, unlike many high-quality cameras.

The Stylus 400 is a 4.0 megapixel digital camera that is both sporty looking and rugged in design. Too many of the digital cameras I have used feel fragile, or constructed with a plastic that just feel like it would crack or break with one accidental fall. And in my house, with three kids, things get knocked off the table all too often. The last thing I want to see happen is for an expensive digital camera to get busted after a three foot fall onto the carpet.

I only mention that because that was the fate on one of my first digital cameras. The rigid metal case of the Stylus 400 gives me a level of comfort, and the feel of the camera itself just feels well built. It’s not easy to quantify the â€œfeelâ€ of something in a review. â€œFeelâ€, being a subjective matter by its very nature, is usually something I leave out of my reviews. But I felt, with the Stylus 400, that it is important enough to mention because this camera just â€œfeelsâ€ like a good, solid camera. One you can both depend on to work, and one that feels comfortable in your hand. Again, this is very subjective in and of itself, but it goes a long way for me when I am contemplating a purchase of any device, be it a car, a laptop, or a digital camera.

The Stylus 400 sports a 3X zoom lens, ships with a 16MB xD-Picture card (memory card, proprietary only for Olympus digital cameras), and comes with its own rechargeable battery and battery charger. Nice features, all, though I would question the purchase of a 4.0 MP camera when there are other cameras in the same price-range with 5MP or higher resolution. Why should this matter? As a rule, the higher the resolution, or megapixels, the better the quality of pictures. 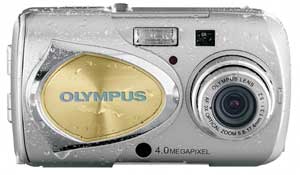 First, to test its â€œall-weatherâ€ feature, I put the Stylus 400 though the paces. To test its waterproof specs, I ran the unit under a light shower for ten seconds. While I doubt too many people will actually want to use an expensive digital camera on purpose in any rainy conditions, it could be the case that a sudden storm hits while you are outside. I was happy to see no ill effects a little water had on the Stylus 400. Dunking the unit in a bucket of water, however, is not recommended, nor would taking it deep-sea diving. But for an occasional spat with some water, the Stylus 400 is safe.

Olympus chose to use digital menus to change settings, or switch picture-taking modes. You can turn the flash and auto timing on and off with a button, but most features force you into the menu to do anything. While this cuts down on buttons needed on the body of the camera, it doesn’t make the unit any more user friendly.

There are a few different modes to pictures, including Portrait, Landscape + Portrait, Landscape, Night Scene, Self Portrait, and movie. Speaking of movie, it seems almost all the digital camera manufacturers are now including the ability to take video with their cameras. The Stylus 400 is no exception. The video format is QuickTime, so your Macintosh will have no problem viewing or using the captured video. However, be aware that with the Stylus 400, you cannot record sound. Why give users the ability to capture video but not sound?

Picture quality ranged from very good to poor. My main concern with the Stylus 400 is one of consistency. While most pictures came out very detailed at the highest setting, there were times in well-lighted situations that one out of six pictures would look bad. Five out of six good-looking pictures makes me nervous. The Stylus 400 just seemed to decide it simply did not care for some condition while I was shooting, and would give me poor results. I was unable to nail-down just why I would get a great picture, and two seconds later a bad one in the same lighting conditions.

Battery life was excellent. The Stylus 400 uses an Olympus LI-10B rechargeable lithium ion battery, and the unit ships with its own battery charger. The battery is easily installed in seconds, and takes only a few hours to completely recharge after depletion. Thankfully, depleting the battery takes quite a while. I found that the Stylus 400, on a full charge, easily outlasted any other digital camera I have reviewed in power consumption. The only negative here is that the battery has to be removed for charging, as there is no dock or plug-in to charge the battery in the camera. There is a DC-IN plug, for which you can buy an optional AC adapter.

The Stylus 400 is turned on and off by manually moving the lens cover back and forth. This is a very intuitive design, and the lens cover feels very solid and dependable.

Looking for negatives, I would have to point out that the xD-Picture card is a proprietary Olympus technology, for which 512MB is the largest size you can get. The Stylus 400 ships with only 16Mb, forcing the consumer to buy a larger card almost immediately. That in itself is not unique with digital cameras, but using non-standard memory cards is. There are simply too many competitive storage mediums for these devices out there, and a quick scan of my local Best Buy and CompUSA showed neither carried xD-Picture cards.

To connect the camera to your computer via USB 1.1, you have to open a side latch on the camera, which is very hard to open at times. I scraped my knuckle on the camera a few times trying to get the side latch open to get at the card slot, USB, and Video Out connectors. I would much rather see an optional dock, so that I donâ€™t have to open this latch just to transfer my pictures. But unfortunately, a dock is not an option on the Stylus 400.

Final Thoughts:
I enjoyed my time with the Olympus Stylus 400. I like the sleek look, great craftsmanship, durability and features. The side panel is annoying, but you get used to it. The inconsistent picture quality is a little troublesome. A little pricey for a 4MP camera. The size is a plus. If you are going to give the ability to take videos, not to be able to capture sounds as well is mystifying.