It was over a year and a half ago now that I decided to support Microsoft and picked up an XBOX. The reason? I had to play Halo. And while you can say anything you like about Microsoft and the XBOX, Halo is one killer game. I finished the single player version in a few weeks, and have since played the player vs. player against friends that come to visit. (My own kids know better than to play me! HA!) 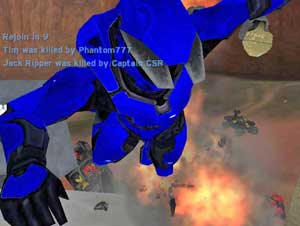 Tim takes a rocket up the, well, you know what…

Bungie was the original creator of Halo, but Microsoft stepped in and bought the company simply to get their hands on Halo and make it an XBOX exclusive. The original plan, though, was to released Halo for both the PC and Mac, but Microsoft saw how good this game was going to be, they knew that Halo could put XBOX on the map. Some games are so good, you buy an entire game system to play that game, such as Grand Theft Auto III and PlayStation II. 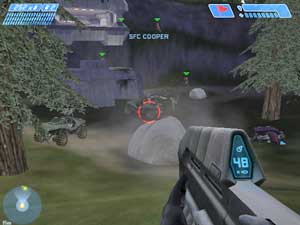 I was sad to see Bungie get swallowed up by Microsoft, as a Mac user who loved their games (I reviewed Myth: The Fallen Lords, way back in 1998!) and did not hold my breath waiting to see if Halo would come to the Mac.

Come it did, in a port of the XBOX version that, while not at visually stunning as the original, is darn close.

For those not in the know, Halo is set in the future. In the game, you play â€œMaster Chiefâ€ and your job is, basically, to kill all the bad guys. Nothing new or original in that, true, but it is the game play, execution, graphics, and story line that set Halo so far ahead of most of the competition.

You may think the Macintosh version of Halo would seem dated at this point, but you would be wrong. The single player mode is fantastic and hours of fun. Having played the XBOX version, I was hoping to simply plug in a USB game controller, but Halo for Mac does not support game pad use. To play Halo, you have to you the combination of your mouse and keyboard. No problem for those who are used to playing Unreal Tournament, or any other game in which you use the mouse to look around and fire your weapon, and your keyboard to move from side to side and back to front. But if you are not use to using both at the same time while playing a game, or if you have a game pad you use, there is a learning curve. For myself, it was not a huge problem at all, and in fact I found the mouse easier to use than a thumb-button. Aiming your fun with a mouse is much more accurate than any game controller, and with Halo, I was a much better killing machine than I am on the XBOX version.

Halo, out of the box, is very unstable. Crashing often, the game was almost unplayable in both single player and online play mode. Fortunately, MacSoft has been quick with the updates, and the latest version of Halo is, while not perfect, much more stable and playable than the boxed version.

Graphics are terrific, and movement of the main character is very intuitive and accurate. Sound plays an important role in Halo, and it is one of the defining aspects of the game. Combining the richness of the graphics with the realistic sounds really helps immerse the player in the world of Halo. There is, after all, a reason that Electronic Gaming Monthly named Halo 2 the most anticipated game of this year.

The single player mode starts off easy for you, teaching you how to move and look around. As Master Chief, you are awaken from cold-sleep as your starship is attacked. You abandon ship, and crash land on a world-sized ring in space, called Halo. (Hence the name.) Your enemies are the â€œConventâ€, a collective of races united in their fanatical religious beliefs. 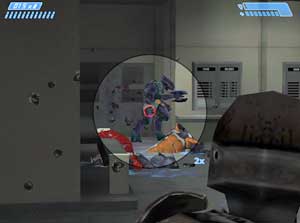 The Convent makes for some great bad guys. Some are brave, and will rush at you with energy swords hell-bend on ending your life. Other with guns blazing, and grenades flying. Some, like the 5 foot tall Grunts, will also charge you if the have numbers on their sides. If you find one alone, however, he is more likely to flee in terror, bemoaning â€œRun! Heâ€™s gonna kill us all!â€ in a hilarious voice.

As Master Chief, you will fight on the ground in many different locations, as well as in tanks, aircraft, alien hovercraft, and the ever-popular Warthog. You donâ€™t know driving games until you drive and fight inside the all-wheel drive Warthog, let me tell you. 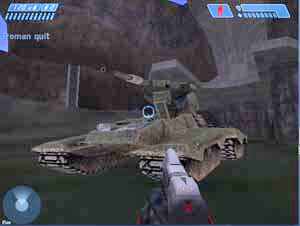 That’s what I’m takin’ about!

The story-plot of Halo is deeply engrossing. It is, besides the fun game play, what will bring you back again and again in an effort to beat the single player mode of the game.

The main reason I wanted to lay Halo for Mac, however, was its online game play. In online gaming, you face off against other player over the Internet or LAN. Games such as Capture the Flag will allow you to work as part of a team, while the more popular Slayer will let you simply kill everyone around you.

Key to the popularity of Halo is the abundance of different weapons and vehicles you can use. The multiplayer game play really shines here. From the shrieking Banshee flying through the air to the growl of the Warthog engine, the vehicles are simply a blast. Team play is a blast, as you can have one player driving the Warthog over the rough terrain, while another sits in the back minding the 102MM rocket launcher or 12.7MM three barreled machine gun. Heck, you can even sit in the passenger seat and fire your personal weapon at the enemies!

Every player will find a personal favorite weapon in Halo. Like to rush in with a lot of firepower? The Assault Rifle, Shotgun, or Plasma Rifle may be your favorite. Perhaps you like to work form a distance, taking out the other team via the S2 AM Sniper Rifle with its 8X zoom with a quick and deadly headshot. Or if high explosive mayhem is your choice of visiting death on other players, you will love the M19 SSM Rocket Launcher. There is a plethora of armaments in Halo, and half the fun is trying each to learn which you like the best.

Pros: Halo is for gaming what nitrous oxide is for drag racing. Full of full-tilt fun with an eye on storytelling and detail.

Cons: Crashing, but these are being addressed in updates. Steep system requirements, needing at least 800MHZ or faster G4 or G5, 256MB or more RAM, and a 32MB of better graphics card. And those are the minimums! Halo may be tons of fun, but you will need a powerful machine just to play it on. All those pretty graphics and sounds make a lot of demand on a system.