I’ve wanted to buy this software package since watching Peter Frampton lavish his praise for it on TV infomercials a few years ago. Frampton played with David Bowie for a while in the 80s, and I respect that. I’ve always respected just about any guitar player better than me. (Let’s just say I respect a lot of guitar players.) The Guitar Method product Frampton touted looked very good on the tube, too, but the positive reports by the test monkeys in the infomercial seemed all-too-familiar and sort of cheesy. Like most all infomercials the good side gets a hard sell but the glitches get nary a mention.

The Box came with a CD-ROM in it, basic instructions for installing the software on the CD-ROM, and some promo materials. It’s nice to have a printed manual, which was absent, but in this case it’s not necessary. Just insert the CD-ROM, click to install the program (it’s available in Mac OS 9 and X formats and Windows) and away we go. The program is installed; after opening the program you get to the Table of Contents and from there begin the lessons. 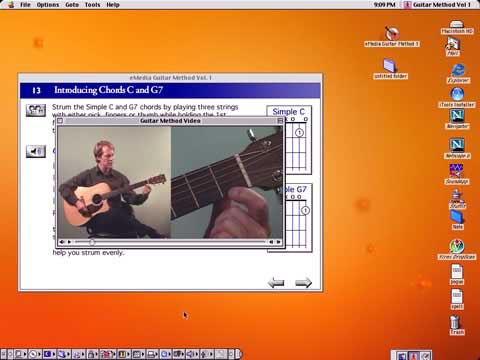 Of course, for this beginner’s course you’ll need a guitar. The lessons indicate you may use an electric guitar, and you may, but I recommend going the acoustic route and trying to match harmonies with the included music on the CD-ROM. The songs are all demonstrated on an acoustic guitar. It makes for better learning to have the same type of instrument as the instructor.

The instructor’s name is Kevin Garry, Ph.D. Professor Garry presents each lesson succinctly in the form of QuickTime movies (see Example A). He starts people out with the most basic elements of guitar playing: the simple G and C chords.

The interface is pretty simple. The program’s main screen provides the basic contents of the lesson, supported by a QuickTime movie (icon illustrated by a movie camera) and simple written instructions. The animated fretboard appears once the audio (the audio icon is illustrated by a speaker) is started. The animated fretboard is your guide, your “bouncing ball” to follow through the songs and chord practices. For songs with lyrics, just follow along with the red-highlighted lyrics on the main screen. Or just do whatever works best for you.

I call it “Fun with The One-Finger Chord.” Professor Garry leads the beginner through the first songs, “Freres Jacques” and “Skip to My Lou,” calmly and effectively. These are simple one-finger-chord songs. By one finger, I mean, literally that the student only needs to press one finger on to the fretboard and strum a few strings to make a chord. For those with even the minutest rhythmic ability, picking up these tunes should be very easy. The teacher gives plenty of time for practice and review. The animations of the fretboard (see example B) coincide with the red highlights moving over the songs’ lyrics to indicate where to play. This is a brilliant way to learn songs.

Keeping the guitar properly tuned is essential. While the course effectively explains tuning its importance cannot be understated. Unlike a piano, which requires a professional’s touch, most guitar players are expected to keep their own instruments in tune. Some guitars, beginner’s guitars especially, need to be tuned often. Relative tuning, explained in the last part of Lesson Four, is required reading and is a quite simple technique to use. But one still needs to use the included Tuner to match the sounds in the lesson.

The lessons continue with Professor Garry slowly introducing more complex chords and rhythms and songs. It’s all done in “baby steps,” in a logical manner, and most people should be able to follow the course easily and learn all of the 70 songs included in the 160-plus lessons, graduating from the old-timey traditional stuff to rock hits such as “Rock N’ Me” by The Steve Miller Band and “Uncle John’s Band” by The Grateful Dead.

I kept the headphones on one ear with the other ear exposed so I could hear my own playing and attempt to harmonize with the artists’ vocal renditions of the songs as well as the guitar playing. Good speakers would be more comfortable, for sure, and would make the lessons a more pleasurable experience. 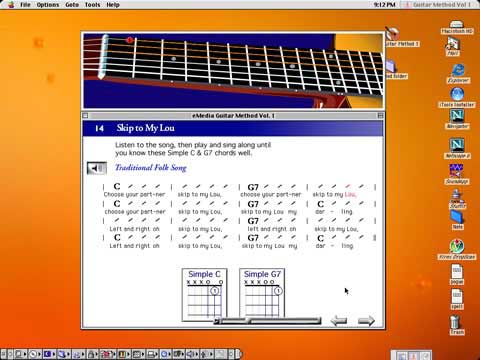 The audio icon (the “speaker”) is pressed, the song begins and the animated fret board springs to life graphically showing the G7 chord.

The OLGA Archive and HCAGF

A puzzling but still welcome addition is the inclusion of suggested songs from the On-Line Guitar Archive (OLGA.net). It’s puzzling because, alas, OLGA no longer offers lyrics, which were removed for legal reasons.

After the first 26 lessons, the CD-ROM directs the user to the OLGA to download the chords of about 30 songs. While it’s useful for picking up chord progressions, it might be difficult for those still in the beginner’s stage, without lyrics to follow.

Still, the user may get bored with the included songs, and may want to go for their contemporary favorites. OLGA provides a nice selection tunes; you get the chords, so if you know the lyrics you’re golden. There’s nonetheless plenty on the CD-ROM to learn and it proves quite effective to stick with just what’s on it.

I further recommend the Acoustic  Guitar  Forum at Harmony Central for on-line support. They are good people willing to answer most any question about acoustics.

Tools
Included with Guitar Method Volume One are four extra tools. The Tuner works okay on my increasingly outdated but still wonderful 400-mHz blue-and-white G3, Spring ’99 model, running Mac OS 9.04, with external microphone.  It’s not real smooth, however. I think anyone undertaking guitar should get a handheld analog or digital tuner, and a pitch pipe. One shouldn’t have to boot-up one’s computer to tune their guitar.

Everything else works great; quite frankly, I think it’s darn decent of the folks at eMedia to include the OS 9 version on the CD, as many other software developers have left the old platform behind.

The Recorder included with the program works fine, but so does SimpleSound that is bundled with OS 9. Mac users can get a nice recording using SimpleSound, and the resulting files can be converted to MP3 format using iTunes; one who feels ready to share one’s guitar education may do so easily.

The Metronome is a hoot and it works great. I’ve never used one before, but this one has a nice selection of preset tempos. I might use it for improvisational practice. Why not?

The Chord Dictionary is nice to have for looking up most any chord, but especially those rare chords that one can’t fathom from the obscure songbooks.

I can’t think of a better computer-based method of learning guitar. While I usually prefer programs that do not require having a CD-ROM inserted to operate, it’s understandable in this case and it really works well anyway. Those QuickTime movies would take up a lot of hard disk space, so it’s better they’re left on the CD-ROM.

The minds behind the Guitar Method Vol. 1 have a gift for providing an elegant interface for relaying basic guitar knowledge. They signed up a fine guitar teacher in Professor Garry.  He delivers the goods in the least confusing way. I backpedaled a bit to get through some of the teachings, but I immediately and intuitively understood precisely what he was relaying. I feel that absolute beginner’s will feel the same way. There’s no substitute for direct human instruction, but for those who like to get a jump on their first person-to-person lesson or those who simply cannot deal with the cost or inconvenience of a private professional human instructor, this is a great start. There were no glitches in the software either.

As I ran through the lessons, like I said, the only thing I felt was odd was the OLGA reference. It’s just not the same since the OLGA had to remove the lyrics and, for beginner’s, I’m not sure it should have been referenced beyond more than a mention. But this is really a minor issue and probably more understandable than I know.

I fully recommend Guitar Method Vol. 1. It’s an excellent piece of software for those interested in learning guitar the easiest possible way without taking private lessons. The lessons make the sum of this CD-ROMs parts much greater than the asking price.

I wish I had this product when I first started playing; instead, I ended up on the path of piecemeal instruction with years of doing some basic guitar maneuvers the wrong way. Still, my friends and I would jam for lengthy sessions and, partly because we DID NOT have the basics down we ended up with some unusual and sometimes fresh material. Today, I play variations of bluegrass, rock, jazz and experimental music on my 1987 Fender Telecaster (electric) with Fender tube amp and Gibson WM-45 (acoustic).

Last year I took weekly private lessons for about four months with an old pro. I learned much, especially scales and modes, which are not covered on this CD-ROM. Bad guitar habits are hard to shake, but with practice my playing has improved, thus adding at least some anecdotal support to the “it’s never too late to teach an old dog new tricks” adage.

Beyond the standards Gibson, Guild and Martin there are many excellent less expensive acoustic guitar options, including Tacoma and Larivee. If one has money to spend I recommend contacting Mandolin Bros. for a Breedlove, Santa Cruz, Michael Dunn, a custom-built or a sweet vintage model. Actually, even if one doesn’t have much money I recommend Mandolin Bros. They have something for everyone including lower-priced Yamahas.  For those who prefer to shop west of the Mississippi, I recommend E.M. Shorts. These are stores with excellent reputations. These stores routinely set up guitars correctly for beginners, making the guitars they offer much easier to play. These are not the types of stores that need to sell anything (well, maybe they do, but it doesn’t show) and the salespeople are willing and able to answer all beginner’s questions online or over the phone.

(For a nice story on a starter instrument check out the legend of Arlo Guthrie’s first guitar , a present from his father, Woody.)