The new G5 Macintosh computers sure look fast, eh? They sure look expensive, too! For those with certain older G4, including the Apple Power Macintosh G4 APG (Sawtooth), Gigabit Ethernet, Digital Audio, or the 2001 QuickSilver, you can choose to simply upgrade your processor to a faster model. Enter the OWC Mercury Extreme G4/1.4Ghz. 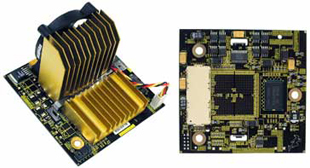 For this review, I used a Power Macintosh G4 Gigabit Ethernet Mac, originally a dual-processor 500Mhz model. Not a slow machine to begin with by any means, but not even close to the new G5 models in speed or power.

The specs!
First, lets take a look at the specs of this Mac before installing the OWC Mercury Extreme card using Xbench V 1.1.1

Hey, wait a minute! 1.25 GHz? I thought this was a 1.4GHz upgrade card. What gives? Well, the OWC Mercury Extreme card sports jumpers, meaning you can set the cards speed simply by setting the jumpers. If you have a 100Mhz system bus, as our test machine does, the maximum speed you can push this card to is 1.4 GHz. If you have a 133 MHz system bus, you can run the OWC Mercury Extreme card up to 1.467GHz. The card can run from 1.2GHz to 1.467GHz. The higher the speed, the higher the temperature of the processor. I should note, however, that running the card at 1.4GHz did not cause any heat problems on our G4.

Here are the Xbench specs after setting the jumpers:

As you can see from the test results above, the higher MHz made a large difference in speed, at least from a benchmark test. How the OWC Mercury Extreme performs in real-world situations should be of more import.

Operating the G4 at its stock dual-500MHz speed, running Mac OS X 10.2.6, the system feels pretty darn spiffy most of the time. Adobe Photoshop could be faster, but when is that not true? I bet there is a G5 user out there right now complaining about how long Photoshop takes to do something.

There is one program which showcases just how slow the 500MHz G4 is, and that is iPhoto. As I write this review, I have over 4,050 photos in iPhoto. And while a faster graphic card installed helps some when opening the program (a Radeon 8500 with 64MB) it still took what seemed forever to open the application. At least fifteen seconds, which is an eternity for a Power Mac G4 owner! Quitting the application even took seven seconds!

With the OWC Mercury Extreme 1.4GHz card installed, iPhoto launched in about a third of that time, or less. Quitting was almost as fast as pushing the command-Q keys. Much, much faster. Even better, manipulating photos in both iPhoto and Adobe Photoshop was noticeably faster as well.

Finder level actions, such as opening a window with a few thousand files, also benefited greatly from the greater horsepower of the upgrade card.

Installation was quick and easy, though those suffering from techno-phobia will not have a good time. As stated earlier, to get the greater speeds from this card, you do have to set jumpers, which sounds a lot scarier than it actually is. In the case with out test unit, to set the card to the higher 1.4GHz speed level, all that was required was to remove jumpers three and four. To do so, pair of needle noise pliers is used, though tweezers would have worked just as well.

I have a few friends who are proud owners of older G4s. Both have, over the last year, upgraded their machines to faster processors, and now see no need to upgrade to an entire new computer, the G5. Take that for what it is worth, but if you have a 450MHz G4, and want a faster machine but donÕt want to spend a couple grand or more for a new G5, the upgrade path may be a better course of action for you.

The OWC Mercury Extreme 1.4GHz upgrade card is currently priced at $579.99. A good buy for users with a need for speed on a budget. Even better, OWC currently has a bundle that includes this cards, as well as an Apple nVidia GeForce4 MX 32MB AGP Card with ADC and DVI Connectors for a paltry $639.95!

The OWC Mercury Extreme G4/1.4GHz is a nice upgrade for older, though still worthy, PowerMac G4Õs. For another $1,200, you could purchase a much faster and advanced G5. 867MHz or dual 800MHz QuickSilver PowerMac owners would probably be better off selling their machine for a new G5, as the speed increase for those machines using this card would, in my opinion, be cost prohibitive. Older G4Õs would benefit much more.

All told, I would have to give the OWC Mercury Extreme G4/1.4GHz card high marks for workmanship, reliability, and functionality. There is no software to install to use this upgrade card, no third party applications at all. Simply pull your old processor card out, pop this one in, and enjoy the speed!

The competition:
For the price, I would recommend also looking at the PowerLogix PowerForce Series 100 G4/1.4GHz, which runs $100 cheaper than the OWC Mercury Extreme card does. While I have not reviewed that unit, I would recommend looking into that card before making a purchase.